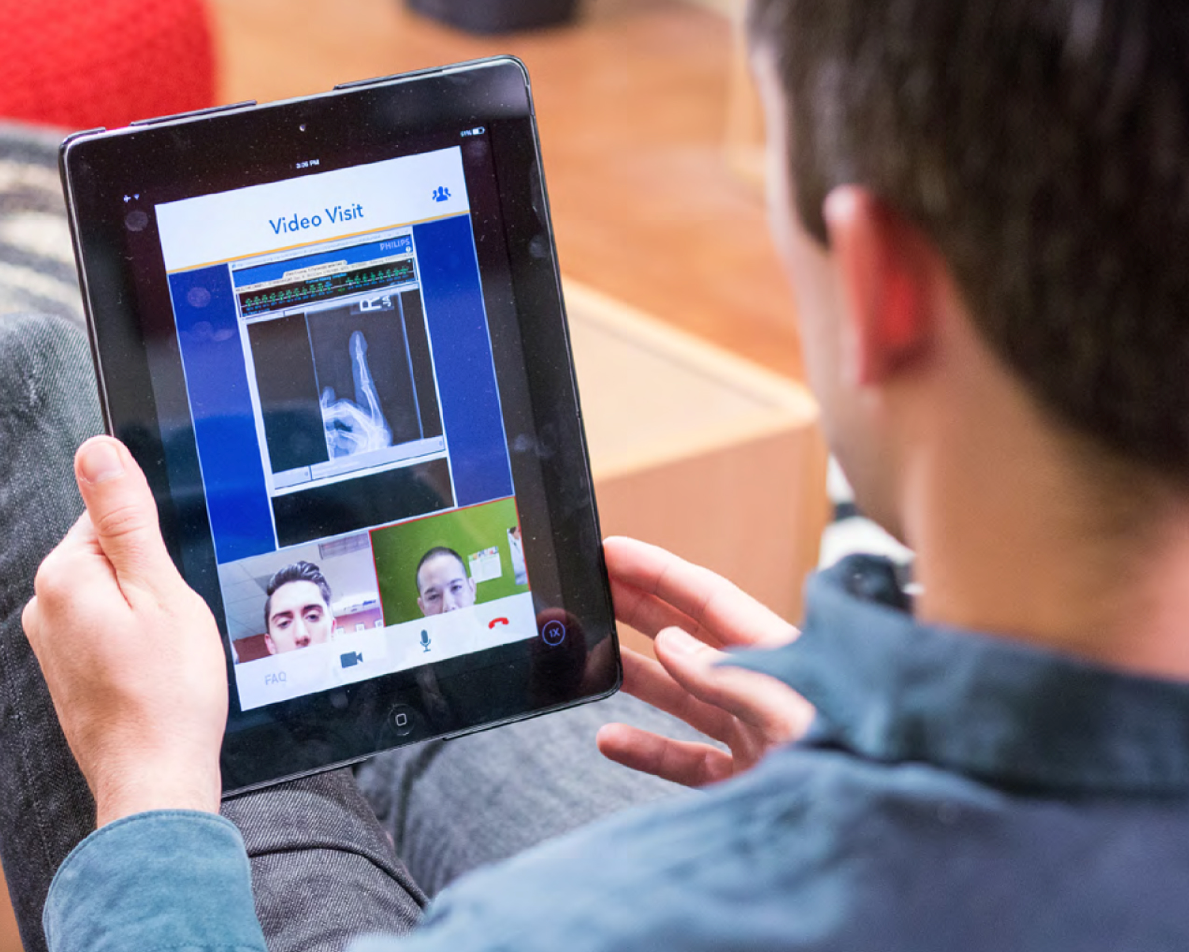 Oregon’s health care system experienced a seismic shift when the pandemic hit, as patients and providers were forced to come up with a replacement for traditional in-person doctor’s office visits.

COVID-19 sparked a rush toward telehealth, which lets health care providers visit patients remotely through connections such as an online video or telephone connection. To handle the pivot, officials established a patchwork of temporary state and federal waivers and agreements, so providers could receive payments equal to those for in-person office visits.

Now they want to make that permanent with House Bill 2508.

The bill would allow providers to continue to get telehealth reimbursed at the same rates as office visits. Prior to the pandemic, insurers typically reimbursed telehealth visits at only a fraction of a face-to-face visit.

One downside to putting telehealth on a reimbursement par with in-person visits: Some in the industry had hoped that telehealth would be a way to offer care at less cost, helping to keep a lid on ever-spiraling health expenditures.

Rep. Rachel Prusak, a nurse practitioner and chairwoman of the House Health Care Committee is the driving force behind the bill. Prusak has previously pushed in the Legislature to extend pay parity to telehealth. This session, her efforts come one year into a pandemic that has fostered its growth.

“During this pandemic, I’ve consistently looked for silver linings in the challenges we’re collectively experiencing,” Prusak, D-Tualatin/West Linn, said at a recent hearing for the bill. “My silver lining is access to telehealth.”

It’s become clear that telehealth, also called telemedicine, is not a fad that will disappear when COVID-19 is contained. Telehealth has existed for about four decades, albeit in more obscurity before the advent of the Internet. COVID-19 set Oregon on the path of a nearly yearlong unofficial pilot project that demonstrates how telehealth works on a wide scale, all without the red tape, focus groups and consultant studies that can slow down health policy changes. Telehealth has now been widely adopted for everything from behavioral health counseling to simple medical consultations -- although it obviously doesn’t work when in-person exams and procedures are needed, or if the patient lacks access to the necessary technology.

The bill’s core is that health care providers would be reimbursed at the same amount as they would for an in-person office visit regardless of whether the coverage plan relies upon a fee-for-service model or some other payment type. The bill also would prohibit health insurance plans from imposing restrictions that prevent or discourage patients from using telehealth. And it would allow out-of-state providers to serve Oregonians, provided they met certain criteria such as if they’re part of a company with a presence in Oregon, have a referral from the patient’s provider or already have an established relationship with the patient.

Providers see a benefit to that. Dr. Erik Vanderlip, the chief medical officer at Zoom Care, told lawmakers on Thursday that the bill would allow more flexibility so its providers could serve across state lines, making its workforce more nimble. The Portland-based company, which is owned by Vancouver, Wash.-based PeaceHealth, has about 60 clinics in Oregon, Washington Idaho and Colorado with nearly 300 practitioners.

While providers by and large support the measure, heavyweight insurers in the health care industry have voiced concerns to the committee. The insurers include Portland-based Cambia Health Solutions and Springfield-based PacificSource. Renton, Wash.-based Providence Health & Services, a nonprofit health care provider that also runs a health insurance plan, is also concerned about the bill’s impact on health care costs.

Their chief concern is that the bill would eliminate the ability to use telehealth as a tool to drive down health care costs after the pandemic ends.

The state’s Implementation Committee for Oregon’s Sustainable Health Care Cost Growth Target Program has recommended Oregon cap per-capita health care cost growth at 3.4% annually, cutting the current growth rate in half. That proposal, now before lawmakers, would hold insurers and providers accountable if they exceed the cap in multiple years.

Prusak said she’s working on an amendment to try to address their concerns.

Coverage of telehealth historically has varied among Medicare, Medicaid and private health insurance plans. That changed under the pandemic. State and federal agencies put out guidance to immediately broaden reimbursement for telehealth and accompanying technologies allowed providers to more quickly implement systems to consult patients remotely when an in-person visit wasn’t necessary.

The Oregon Health Authority and Department of Consumer and Business Services made temporary rule changes for Medicaid providers and state-regulated insurance plans so that providers would receive pay parity. In March, the agencies issued guidance for private health insurers and the coordinated care organizations that serve 1.26 million low-income Oregonians on Medicaid. The chief goal was for insurers to reimburse providers at the same rate ffor a telehealth visit as for an in-person visit.

In December, the consumer agency reached an agreement with insurers to extend payment parity for telehealth visits at least through June 30.

The federal Centers for Medicare and Medicaid also eased up telehealth restrictions with a waiver that gave patients and providers more flexibility to treat patients and bill for services.

Specialty and primary care clinics are strong supporters of HB 2508, saying it boosts patient access and offers flexibility, such as a provision allowing telephone use instead of internet access. They see the bill helping patients: seniors and disabled people who simply need a prescription refill, or rural residents who face long distances to see a provider.

Even opponents of the bill agree that use of telehealth should expand. The sticking point  is the cost, as the state looks to curb the rise in health care expenses.

Kristen Downey, director of government affairs for Providence Health & Services, said the company wants the expansion of telehealth to contribute to the goal of reducing the total cost of care, Downey said.

“Patients don’t expect to be billed the same for a call or an email from their provider,” Downey said.

In a follow-up letter, Providence suggested that the shift to pay parity should include a two-year period to give providers time to integrate the technology into their work and look for efficiencies.

Providence officials cited concerns that the bill’s definition of telehealth is too broad and could lead to increased billing for phone calls and emails.

Lawmakers heard similar concerns from Richard Blackwell, director of government relations for Pacificsource Community Solutions, the coordinated care organization that serves Oregonians on Medicaid in central Oregon, the Columbia River Gorge and Marion, Polk and Lane counties. Blackwell said that the state should instead support a stronger move toward so-called value-based payments to incentivize providers, because HB 2508 could increase the cost of health care by allowing providers to charge for messages and emails. He also raised concerns to lawmakers about equity, as people with access to broadband and video technology would get better service than patients with a voice-only connection to a provider.

Vince Porter, director of government relations for insurer Cambia Health Solutions, which owns Regence and BridgeSpan, echoed those concerns. Even though the state looks to rein in overall health care cost growth, he said, this bill “removes telehealth from the cost-savings toolbox permanently.”

Prusak’s amendment hasn’t been published yet, but it’s intended to address their concerns and not lock telehealth into a fee-for-service structure. Lawmakers will continue to work on those details.
Rep. Christine Drazan, R-Canby and a committee member, said she supports expanding telehealth but wants to ensure that lawmakers don’t overlook the differences in payment systems. For example, she would hate to see a health care system evolve in which providers “stack up telehealth visits” and limit in-person care because providers benefit most from telehealth while patients might face delays in securing in-person care. The patients should benefit from any change, Drazan said.

By and large, however, health care providers are strong backers of the bill across different disciplines, from primary care to behavioral health.

The Oregon Primary Care Association, which represents 33 federally qualified health care centers, said the volume of telehealth visits has increased during the pandemic.

The Oregon Independent Medical Clinics, a coalition of 11 clinics from Portland to North Bend with 5,300 health care workers, said that without any changes, insurance plans after the pandemic would return to only paying about 50% to 66% of the cost of an in-person office visit for a telehealth visit.

“For telehealth to be a viable, sustainable option for patients and their providers, we need pay parity to be a permanent assurance,” the group said in a letter.

The Coalition of Community Health Clinics, which represents 17 safety-net clinics in the Portland metro area group stressed in a letter that telephone-only visits are key, as many low-income and elderly patients lack access to video and Internet technology.

The bill also drew wide support from behavioral health providers and advocates, who say telehealth boosts participation in services and offers another way to reach clients.

The Oregon Psychological Association backed the measure, saying in written testimony that telehealth is a “safe, viable access point to care for people who otherwise would not have sought health services.” Psychologist Brian Sandoval, representing the association, wrote that in 2018 he started a telehealth behavioral health program in Astoria and Clatskanie, saying it can reduce stigma and help geographic areas with few resources.

Telehealth also can help young people, said Cherryl Ramirez, executive director of the Association of Oregon Community Mental Health Programs. In testimony, Ramirez said the bill’s language to allow telephone-only service is helpful for people who may lack privacy or access to the Internet.

Feb 8 2021
News source:
The Lund Report
Keywords:
telehealth, legislature, rachel prusak, house health care committee, health insurance
×
This article is for premium subscribers. If you are one, please sign in below.
You can see two more premium stories for free. To subscribe, click here. We depend on premium subscriptions to survive, and they are tax deductible.
Sign InGo Premium Not now