Companies still expect the cost of specialty drugs that are carefully administered to treat conditions such as cancer, HIV and hepatitis C to continue rising at a double-digit annual rate
By:
Lisa Gillespie; Kaiser Health News

More than half of large employers in 2016 will aim to more tightly manage employees’ use of high-priced specialty drugs, one of the fastest-growing expenses in their health plans.

Despite those efforts, companies still expect the cost of specialty drugs that are carefully administered to treat conditions such as cancer, HIV and hepatitis C to continue rising at a double-digit annual rate — well ahead of the pace for traditional pharmacy drugs or companies’ overall spending on health benefits, according to the National Business Group on Health.

The group released a survey Wednesday that found 55 percent of employers next year plan to direct employees to specialty pharmacies if they need drugs that can cost thousands of dollars for a single treatment. That share was up from a third in the group’s survey a year ago on companies’ plans for 2015 health plans.

More companies also say they will require employees to get prior authorization before buying specialty drugs under the employer’s health plan — 53 percent vs. 29 percent a year ago.

The survey, conducted May 19-June 24, reflects the plans of 140 employers who insure more than 10 million people in total, including employees and their families.

What’s driving companies’ focus on the price of specialty drugs is the anticipated 2018 arrival of a federal excise tax on high-cost health plans. Under the Affordable Care Act, employers could be subject to a 40 percent tax on the amounts by which the costs of their sponsored plans exceed government-set thresholds. Revenue from the so-called “Cadillac Tax” is meant to help pay the cost of providing health insurance under the health law to previously uninsured Americans and curb growth in health care spending.

Nearly half of employers surveyed by the National Business Group on Health said at least one of their health plans will exceed the excise tax threshold in 2018 if they did not make any changes. The majority of employers said they expect overall health plan costs in 2016 to rise by 5 percent on average after health plan changes are made.

Brian Marcotte, president and CEO of the group, indicated only 33 percent said they would offer only a high deductible plan in 2016, up from 32 percent in 2015.

“It’s the calm before the storm. Companies are taking a wait and see approach,” Marcotte said, referring to the possibility that Congress could repeal the Cadillac tax.

In the meantime, companies are looking everywhere to better control rising health care costs. Expenses for specialty pharmaceuticals, which can cost up to $10,000 for a month of treatment, are on the radar. Traditional pharmacy spending is expected to grow 3.9 percent in 2016, but specialty pharmaceuticals by 22.3 percent, says the National Business Group on Health, citing a report by Express Scripts, a pharmaceutical benefits management firm.  Among the drugs fueling the increases are Sovaldi and Harvoni, drugs approved last year for the treatment of hepatitis C that can cost $1,000 a pill.

In 2012, 53 percent of specialty drugs were paid through the traditional medical benefit, which means they are mainly injected at a hospital, doctor’s office or another health care provider. That’s a problem for employers because health care providers can bundle the expense with unrelated charges, hiding the drug’s actual cost. Specialty pharmacies are more transparent about drugs’ costs. Moving those drugs to a specialty pharmacy can save an average of 19 percent for employers, though patients may pay a large portion of the cost, according to a study from health care consulting firm Avalere.

Specialty pharmacies also help companies spend efficiently, by calling patients regularly to ensure they’re taking their medications, getting prior authorization and initial approval for only a limited supply of specialty drugs. An estimated 10 percent of hospitalizations in older adults may be caused by not sticking to doctors’ orders for taking their medications, according to a 2014 study by the Johns Hopkins Public School of Health. 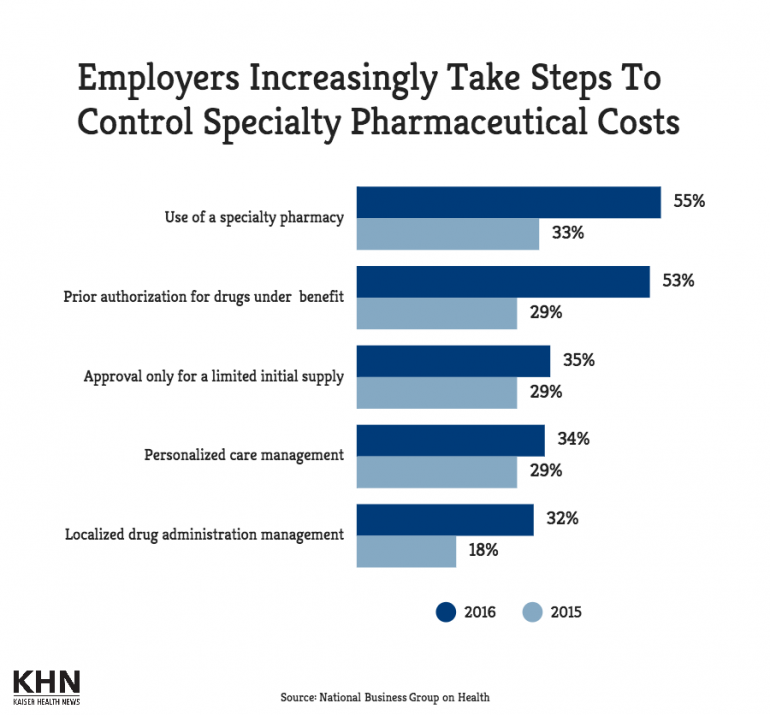