By:
Amelia Templeton and Rob Manning of Oregon Public Broadcasting 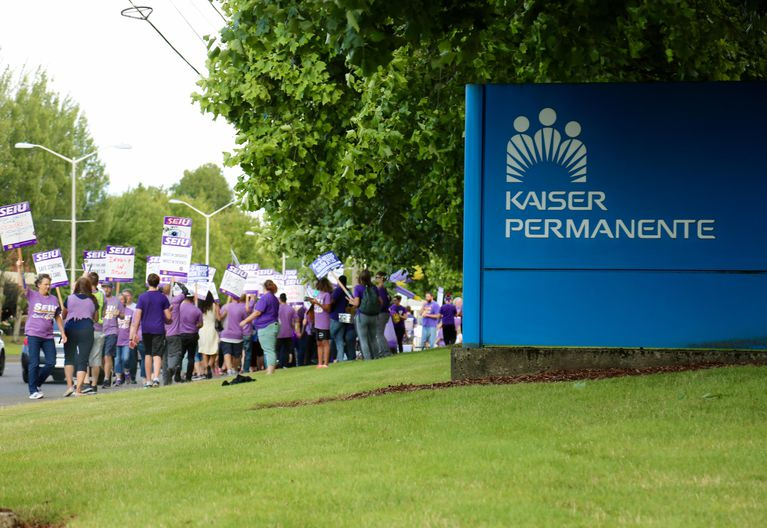 Nurses and other health care workers at Kaiser Permanente hospitals and clinics throughout Oregon started voting on Monday on whether to authorize a strike.

The labor dispute is unfolding at a critical time, against the backdrop of a statewide health system that is extremely vulnerable to disruptions.

Nurses are in high demand as the state’s COVID-19 vaccine mandate for health care workers takes effect in two weeks; opposition to the mandate has prompted other health systems to close clinics and seek out temporary staffing.

The roughly 3,000 Kaiser nurses, physicians’ assistants, laboratory technicians and other skilled health care workers represented by the Oregon Federation of Nurses and Health Professionals have been working without a contract since the previous one expired on Sept. 30. The Oregon local union is coordinating with Kaiser union health care workers in other parts of the country — a workforce of 52,000 people in eight states.

Kaiser officials said administrators have been in national bargaining with the unions since last April but have so far been unable to reach an agreement on a new contract.

Oregon Federation of Nurses and Health Professionals spokesman Shane Burley said one of the key union concerns is around a two-tiered system he says Kaiser has proposed, which would hire new health care workers with diminished benefits and lower wages.

Kaiser administrators released a statement on Monday saying that union members working without a contract was “not unusual,” and that the Kaiser negotiators, “have made progress in many important areas, have extended an initial economic offer and will continue to work collaboratively.”

At the same time, Kaiser leaders pleaded with health care workers to continue negotiating without walking off the job.

“We understand that some union leaders are now calling for a strike authorization vote, even though our members and communities are continuing to face the challenges of the ongoing pandemic,” Arlene Peasnall, Kaiser’s senior vice president of human resources, said in a written statement. “A strike authorization does not automatically trigger a strike.”

Union leaders say they’re not certain how long voting will last; there are a lot of members, and they’re casting ballots in a first-of-its-kind virtual vote. And a strike would not follow immediately: the union would have to give a 10-day notice before anyone can walk out.

Burley said Kaiser management is nudging nurses and other healthcare workers toward the picket lines.

“The fact that Kaiser would push toward a strike is not good,” he said. “It is a bad choice on their part. Our members want to stay there supporting people. The message that is coming from our members, is if they strike they are doing it for their patients.”

Kaiser Permanente’s Peasnall called on union members to “reject a call to walk away from the patients who need them.” The nonprofit’s HR leader indicated Kaiser is preparing contingency plans in the event of a strike.

“Our priority is to continue to provide our members with high quality, safe care,” Peasnall said. “In the event of any kind of work stoppage, our facilities will be staffed by our physicians along with trained and experienced managers and contingency staff.”

But union leaders argue that better working conditions for nurses and other skilled health care workers would ultimately create better conditions for patients.

“We know their number one concern is staffing,” Burley said. “Kaiser needs to do the right thing to ensure that the future of patient care is intact.”