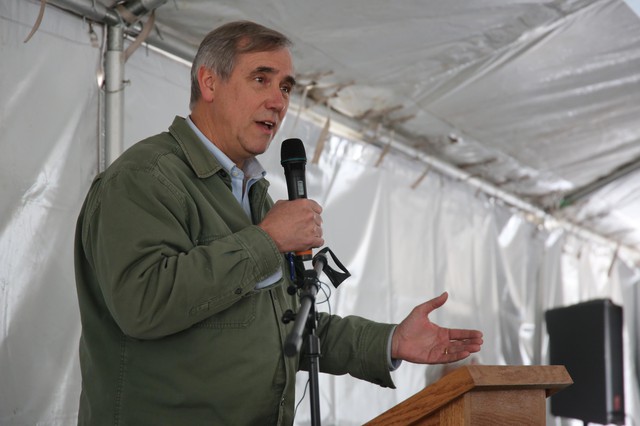 Sen. Jeff Merkley at a ribbon-cutting ceremony in 2019. /Emily Cureton/OPB

For more than 50 years, people booked into local jails have been stripped of their federal health care benefits, leaving an already vulnerable population with even less support.

That lack of federal dollars coupled with the mandate saddles jails with what is often their single largest expense: medical care.

Lawmakers in Washington D.C. put forward legislation last week that would allow federal benefits to continue for people booked into jail, where the vast majority of inmates are awaiting trial.

Sens. Jeff Merkley, D-Oregon, and Ed Markey, D-Massachusetts, introduced two bills that would allow inmates to keep their federal benefits. It would allow them to access their Medicare, state Medicaid plans, veterans health benefits, or in the case of juvenile defendants, the Children’s Health Insurance Program.

The legislation could improve health care — including mental health — for inmates while simultaneously reducing medical costs for counties. It would also apply to other public correctional facilities such as reentry centers.

Merkley said he was particularly concerned with health care benefits being cut off from people who had only been charged, but not convicted, of a crime. In some cases, he said the defendants are stuck in jail because they can’t afford to pay their bail.

Inmates have their federal health benefits suspended when they enter jail. In some cases there can be delays in getting those benefits resorted, even after a person is released from custody.

“To strip someone’s coherent health care away from them, something they’ve paid for when they’ve haven’t been convicted of anything, seems problematic, perhaps unconstitutional,” Merkley said.

He said inmates have their health compromised while counties incur costs they can’t afford.

And the lack of adequate mental and physical care in local jails has led to preventable deaths.

Since 2008, at least 306 people across the Northwest have died after being taken to a county jail, according to an investigation by OPB, KUOW and the Northwest News Network. Of those, roughly 33 percent — or 100 people — died from some type of illness, while another 10% died from drug or alcohol-related conditions. By far, the leading cause of death was suicide.

This year, Oregon’s Criminal Justice Commission and the Council of State Governments put out a report that looked at 12 county jails across the state. It found in 2017, 65% of people who were booked into those jails four times or more were on Medicaid. That same study also found 29% had a mental illness and 45% had a substance use disorder.

The provision that stops inmates from accessing federal health care dates back to 1965. The intent was to prevent states from shifting health care costs of convicted inmates to the federal government. But it also impacted local jail inmates who are still awaiting trial.

“This is an issue that we’ve been struggling with for years,” said Yamhill County Sheriff Tim Svenson. “Trying to provide a high level of medical service to individuals who come into our facility, who are very vulnerable at that time, have high behavioral health, high medical needs. But their benefits immediately get cut off when they walk in the door.”

Svenson said inmates who are waiting for trial shouldn’t be losing a federally protected benefit just because they’re in jail.

In Multnomah County, corrections health care tops $24 million annually, which is paid for out of the county’s general fund. It covers everything from x-rays to gynecological care.

Emily Abrams, eligibility specialist in the Corrections Health Division of the Multnomah County Health Department, spends much of her day signing up people in one of the county’s jails for the Oregon Health Plan.

She estimated 95% of people who come through the jail are eligible for OHP.

“It’s the majority of people who come through here,” she said.

And those managing jail health care systems say because it’s required, there should be more support.

“If that’s a federal benefit and they’re federal requirements for constitutional level of health care in a jail, then it makes sense that the federal government would pay for that,” said Dr. Mike Seale, deputy director of Corrections Health in Multnomah County.

While the bills appear to have broad support outside of Congress, it’s not clear whether they’ll move forward.

“This is the sort of bill we’ll have to build a conversation around,” Merkley said. “It’s not something on the top five list of things people are talking about in America, but I think it’s a very worthy effort to improve the continuity of care.”

He said he would try to attach the legislation to larger health care bills.