An Insider’s Look At The Hunt For Omicron In Oregon 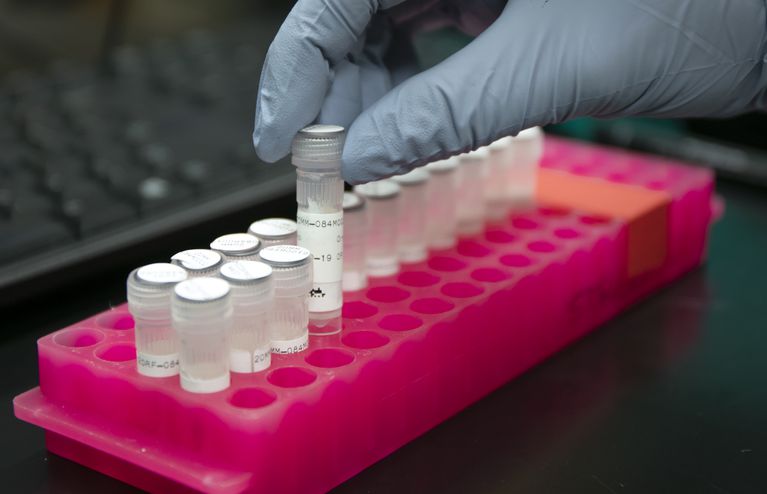 Oregon Health & Science University launched an in-house COVID-19 testing lab in March 2020, and has since expanded it. Now OHSU is leading the search for variants of concern in Oregon./OHSU

One of the region’s leading COVID-19 experts says a team in Portland is already putting clues together in an effort to find evidence of the new variant in Oregon.

Dr. William Messer is part of the Oregon SARS-CoV-2 Genome Sequencing Center, a team at Oregon Health and Science University leading the state’s surveillance effort for COVID-19 variants of concern. His research specialties include viral evolution and the human immune response. As a clinician he cares for COVID-19 patients.

Messer walked us through the team’s hunt for omicron, the new COVID-19 “variant of concern.” Here’s what we learned about what’s good, what’s bad, and what’s hyperbole when it comes to omicron.

Scientists have leg up on detecting omicron

Scientists haven’t found omicron in Oregon yet, but it was detected in a person in California on Wednesday. The many mutations in the omicron variant’s spike protein have given scientists a shortcut to screen for it.

Messer says that while genetic sequencing is required to detect most variants, the omicron variant is among a few that produce a unique signature in a common type of PCR tests that OHSU and many laboratories use to screen nasal swabs for COVID-19.

“This particular virus fails the test for one of the three genes — it’s the spike gene and it’s what we call an S-dropout when the spike gene isn’t detected,” Messer said.

The ability to use some PCR tests as an initial screen for the variant is huge. It means that rather than needing to go through full genomic sequencing — which is only done for a small percentage of samples collected from COVID-19 cases — scientists can screen for likely cases of the variant using the much more commonly used PCR test.

Testing is underway now could show if omicron is in Oregon

The B117 or U.K. alpha variant that spread a year ago is also an S-gene dropout variant, and Messer said that allowed scientists to screen for that variant in routine clinical testing.

Messer said the OHSU sequencing team has gone back to look for that S-gene dropout signature in the PCR tests of swabs it is currently working with.

The team has identified a handful of them. Messer suspects that those cases are more likely to be the alpha variant of COVID-19, which also produces the S-gene dropout. But Messer said the team will be doing full genomic sequencing on all those samples.

“That’s kind of the first thing that we’re doing is moving all of those to the front of the line, to check and make sure that none of those S-dropout viruses are omicron variants,” Messer said.

The team is also developing additional tests that zero in on some of the hallmark mutations of the omicron variant to speed up the process of confirming cases.

Some of omicron’s mutations might help it evade our immune system, making it better at infecting people who’ve had the virus before or been vaccinated.

Messer said that, to date, none of the variants circulating, including delta, have been particularly good at evading our vaccines or immune systems.

One reason for that, he thinks, is that there are hundreds of millions of unvaccinated people still available for the virus to infect. That means from the virus’s standpoint, there hasn’t been a big competitive advantage for mutations that allow a vaccine to better infect vaccinated people.

But Messer says omicron has a lot of mutations in an important location - the receptor binding domain of the virus’s spike protein.

That receptor binding domain is key for two reasons: It’s what the virus uses to fuse with and enter human cells; and it’s the most important area of the virus targeted by antibodies and the vaccines.

It’s possible the virus evolved with those spike protein mutations because they give it an advantage when it comes to sticking to and entering human cells.

Regardless of how the mutations ended up in that particular location, they may make it harder for antibodies familiar with earlier strains of SARS-Cov-2 to target omicron.

We have advantages over this virus, including vaccines

A virus that is better at evading our antibodies doesn’t have a get-out-of jail free card, Messer said.

Human immune systems have their own ways of stepping up and responding to evolving viruses, and antibodies are just one part of a very complex system that protects us.

That’s why Messer avoids using the common term “immune escape,” which, he said, overstates the virus’s ability to evolve around our defenses.

Messer said the current vaccines likely offer some protection even against a virus that is better at evading antibodies.

“Vaccines are a great way to give it a head start against a virus that has immune evasion capacity,” he said.

And finally, masks, physical distancing, and limiting indoor socialization still protect us from acquiring any of these variants, regardless of their genetics.

The omicron variant did not appear ‘out of the blue,’ even if that’s how it feels

“This virus has come to everybody’s attention in part because of the large number of mutations that it has compared to its most closely related progenitor,” Messer said. “It’s important to recognize that those mutations probably did not arise all at once.”

The new variant has about 50 significant mutations, compared to about 20 for the delta variant.

Messer said omicron’s many mutations likely emerged slowly over time, undetected as the virus was circulating in a population where genomic testing for new variants isn’t happening regularly or at all.

In the case of other variants of concern like delta, scientists have a better understanding of the stepwise evolution that took place and enabled the variant to become more competitive.

“Evolution has happened, probably in the same way that it has happened with all of the other variants. But because we didn’t watch it happen, it’s a little bit more alarming,” he said.

Knowing more about where the virus came from could help answer a key question: Will it cause a higher number of breakthrough infections in people who’ve been vaccinated?

Messer said that one of the key unknowns about omicron is whether or not it evolved while transmitting in a population that had been relatively unexposed to the virus and unvaccinated.

In that scenario, its primary evolutionary driver would favor mutations that made it more successful transmitting from one person to another.

On the other hand, if omicron evolved while passing through a highly vaccinated population or a population that had been previously infected with COVID-19 in large numbers, that would suggest it faced evolutionary pressure that selected for mutations that allow it to escape our immune response.

‘We don’t know where this virus evolved to acquire all of these mutations,” Messer said. ”We don’t know for sure what the driving force was, but you can imagine why that would be really important to understand.”

The next few weeks will be a critical learning period

Messer says in the next two to four weeks we’re going to find out what omicron is capable of.

Scientists and policy makers alike will be looking for answers to three key questions about the new variant:

Is it more easily transmissible than previous variants, such as delta?

Is it better at evading our immune system and causing infections in vaccinated or previously infected people?

And finally, is it more virulent — likely to cause severe infections?

Surges in cases, for example, could indicate the virus is more transmissible.

The rate of breakthrough infections in people who’ve been vaccinated will help indicate whether or not omicron’s mutations make it better at evading our immune response.

“So not just breakthrough, but severe illness breakthrough because those are really going to be the data points that allow us to decide, for example, do we need a new vaccine? Do we simply need to continue to push our vaccine as it exists into unvaccinated populations?” Messer said.

Messer said that in the background of his thinking is this: SARS coronavirus is on a trajectory to become a seasonal virus that moves through the population every year, similar to the common cold. So a new variant that is more transmissible, but doesn’t make people any sicker, is the kind of thing we should start to expect. If the new variant is resulting in more severe disease, that’s a little different.