June 13, 2012 -- Immigration status puts another layer of complexity on an already overly complex system for medical insurance coverage in Oregon and across the U.S.

Oregon’s rate of uninsured children is lower than the nation’s average after the Healthy Kids program expanded coverage to virtually all minors, but there are still residency requirements attached to the program, so undocumented kids are relegated to emergency
medical coverage only. 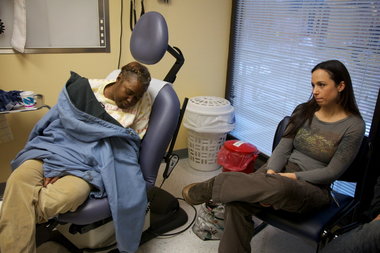 According to this year’s report by the Kaiser Commission on Medicaid and the Uninsured, lawmakers tend to ignore the issue of providing primary medical care to immigrants for reasons that extend beyond the ability of noncitizens to vote in elections.

Due to limited access to employer-sponsored coverage and eligibility restrictions for Medicaid, 47 percent of noncitizens are uninsured compared with 16 percent of U.S.-born citizens. But citizens still are the majority of the currently uninsured population, with the total number of lawfully present and undocumented noncitizens accounting for only 20
percent of the total uninsured.

Although the majority of immigrants work, they generally find jobs with low wages (at $25,000 annual income, half of citizen households) that provide limited access to employer-sponsored insurance. Beginning in 2014, the Affordable Care Act aims to expand Medicaid, create new health insurance exchanges and significantly increase coverage options for citizens and lawfully present immigrants.

“To assure that these expansions translate into increased coverage and to reduce health disparities, it will be important to reduce barriers to enrollment and care, which disproportionately impact low-income immigrant and mixed citizenship status families,” the report concludes.

Lobbying health policymakers to make coverage available to as many people as possible, Andrew Riley, public policy director for the Center for Intercultural Organizing, sees the problems identified in this Kaiser report as equally prevalent in Oregon.

“We view it as unconscionable that any individual—or any group of individuals—would be excluded from receiving health coverage for any reason,” Riley said.

With undocumented folks categorically ineligible for Medicaid or Healthy Kids, Riley argues that the federal government also wrongly squeezes them out of virtually every other direct medical assistance program provided on the basis of income. So-called “safety valves” could create parallel markets for undocumented residents to
receive assistance in purchasing insurance.

“As the system is now, undocumented individuals and families are free to participate in the private market, assuming they can pay the full cost of their own care (no mean feat, especially given the correlation between documentation status and poverty),” Riley said.

“A safety valve system would potentially chip in state subsidies and create a distinct market from the ACA’s exchanges (and thus getting around its blanket ineligibility for undocumented folks). This is politically sensitive, as are most issues surround immigration status, so there hasn't been significant action on it.”

Oregon’s current Citizen/Alien-Waived Emergent Medical (CAWEM) program is available to individuals who meet all eligibility requirements for a medical assistance program except for citizen/alien status and Social Security number requirements.

Individuals eligible for CAWEM are only eligible for emergency medical benefits, so primary and preventative care generally are not covered.

Pregnant women must be legal residents of the U.S., live in participating counties and have not met the “five year bar” requirement for Medicaid. Under the Children’s Health Insurance Program Reauthorization Act of 2009, states found a loophole for eliminating this controversial bar for lawfully residing immigrants during their first five years in the U.S.

Although CAWEM benefits include childbirth services for labor and delivery, only select counties in Oregon have been using Oregon Health Plan funds for prenatal care. Current budgets covering the mother as a “vessel” of the unborn child breaks down to about 74 percent federal funding, 24 percent from the state and nearly 2 percent from the counties.

Lincoln County ended its participation in the program effective Dec. 4, 2009, but in 2011, the program expanded to Columbia, Crook, Douglas, Jefferson, Lane, Morrow, Union and Wasco counties.

Riley noted that a legislative proposal may expand the suite of services offered to undocumented immigrants to include prenatal care, especially given that a number of organizations have been involved in pushing for these services, arguing the federal government will reimburse Oregon for them.

“For the protection and preservation of public health, access to care is critical for all individuals residing in Oregon,” Quartarolo said. “We certainly support the concept of broader insurance coverage as a means to greater access.”

OPCA is still developing a specific state legislative agenda for the upcoming session, Quartarolo said. In the past couple sessions, its state policy agenda focused on healthcare reform through community care organizations, and at the federal policy level last fall, OPCA joined other primary care associations and community health centers in opposing
cuts to Medicaid.

The Kaiser report identifies significant challenges that exist even if people are eligible for coverage, due to fear of immigration enforcement, lack of system and language literacy.

Oregon is establishing a process for registering, qualifying and certifying healthcare interpreters and making sure they are available throughout the health system, said Alissa Robbins, Oregon Health Authority spokeswoman. The agency is also aiming to build models of coordinated healthcare that are traditional in many countries outside of the U.S., such as community health workers and doulas.

“OHA’s Office of Equity and Inclusion addresses the health of immigrant and refugee populations by assuring services meet culturally and linguistically appropriate service standards,” said Robbins. “This means working in partnership with community partners, including immigrant and refugee organizations, leaders and individuals to establish the expectation of healthcare providers to promote and assure health equity.”

The agency will eventually adopt standards for collecting race, ethnicity and language data—with the idea to ensure this data is used to identify inequities in healthcare and track the effectiveness of efforts to eliminate them.

Before the ACA passed, the original version of HB 2009 in the ‘09 legislative session would have limited healthcare reform in Oregon to just citizens, which coalition partners viewed as fundamentally inequitable. The immigration-reform advocates were able to get language in HB 2009 that covered legal residents. The bill’s language effectively mirrors standards in the ACA.

In continuing discussions around what can be done at a statewide level to increase access to health care, Riley says the “low-hanging fruit” is shortening waiting periods, although he knows of nothing specific proposed to address it.

“Our hope going forward is that organizations like CIO and our partners can work jointly with the state to ensure that everyone receives quality, affordable healthcare,” he said.