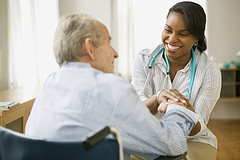 August 15, 2012 -- David Walker fondly remembers when he was growing up in Philadelphia, the doctor who delivered him used to make house calls and walk around the neighborhood.

Walker’s sense of nostalgia, and several years of experience in various aspects of the healthcare and insurance industries, has prompted him to try and re-create that model with Humaucracy Health.

For Walker, the company represents the culmination of nearly two decades of pondering the healthcare system in this country and how it compares to those in other industrialized nations.

“I have a unique perspective from many angles,” Walker said.

Walker’s background includes stints teaching overseas in France and Japan, where he saw how those countries’ healthcare systems work, and in various positions within multiple insurance companies. He’s also worked extensively in healthcare, which familiarized him with the billing codes used by insurance companies and hospitals.

“No citizen has any idea how much the services actually cost,” Walker said.

“Our goal is to make it simple, empowering and healthy,” he said. “That’s our model.”

After all of his experiences, Walker refers to the healthcare industry as a “giant monster” with different hidden power centers, many of which are often in conflict with one another.

“You, as an individual, have no one to stand up for you,” Walker said.

Walker said that Humaucracy Health is designed to eliminate the barriers between doctors and patients. Humaucracy charges $90 per month for its services, and has thus far drawn three subscribers. It focuses on nine health domains, which include diet, emotion, cognition and community.

Although Humaucracy Health currently consists of Walker and three team members, there are no immediate plans to open a physical location. A long-term goal, Walker added, is to have nurses in purple scrubs walking around the Mt. Tabor neighborhood— much in the same way that his childhood doctor used to do.

Image for this story by myfuture.com (CC BY-ND 2.0) via Flickr.