By:
Pat Kruis of The Madras Pioneer 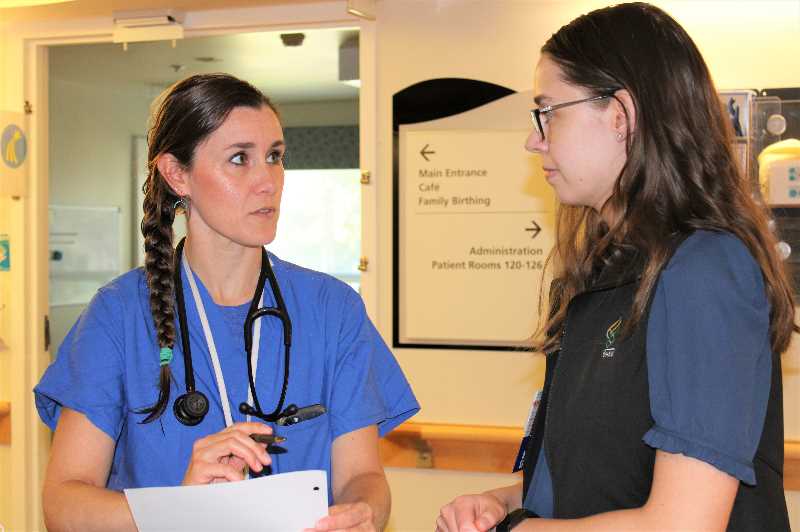 You’ve heard it before. Jefferson County ranks among the three least healthy counties in Oregon.

The county’s low doctor to patient ratio puts a bad mark on our report card.

A new residency program promises to bring doctors to the area and a lot more.

Now the county is a Health Professional Shortage Area. Counties get scored on a range from excellent, 6, to horrible, 26.

“Anything over 15 or 16 is pretty darn underserved,” said Dr. Rob Ross, director of academics and research for St. Charles. “Jefferson and Crook Counties rank between 16 and 18, depending on the year.”

Medical residents in the house

St. Charles announced the Three Sisters Rural Track program in 2020. The first actual participants in the program will show up in Madras in July of 2025.

While that may seem a way off, one resident has already been here on a pilot basis. “It helps our nursing staff and physicians get used to what it’s like to have residents,” said the program director, Dr. Jinnell Lewis.

“It was interesting because I’m the first resident that’s been out there in a while,” said Scheurich.

St. Charles Madras hosts medical students all the time. Residents bring something different to the table

“Medical students are students. Residents are doctors,” explains Scheurich. Medical students go through the process of diagnosing and recommending treatment as more of an exercise. Residents are board-certified doctors who evaluate, prescribe medicine and treat patients under the supervision of the attending physician.

Scheurich says her residency in Madras was educationally rich. “I’m excited about the rural track that is out there. I think St. Charles Madras has a lot to offer residents. Over the next couple of years, Madras will host two to three residents a year.

Setting up the program

Lewis still works part time as a doctor and spends the rest of her time building the program.

“This is the next step up from teaching medical students to teaching residents,” said Lewis, who has practiced in Madras for the past eight years and has always been interested in teaching. “I never thought it could be possible in Madras when I moved here.”

She is making it possible. She’s in the process getting the program accredited. Then next year at this time, she begins recruiting the doctors who will spend two years of their family practice residency in Madras. Residents spend their first year at OHSU in Portland, and the final two years on the rural rotation in Madras.

Lewis says Madras exposes residents to variety of patients they may not see in the same numbers in other rural communities, “with the amount of diversity in Madras with the Latinx and Warm Springs Native population.”

In 2023, newly graduated doctors from all over the country will apply for their residency. Those looking for a family practice residency may consider Madras. Along with the obvious attractions of sunshine and recreation opportunities, Madras is close to Portland with its sophisticated specialty services, and the program is run by OHSU, ranked by U.S. News & World Report as Oregon’s Best Teaching Hospital. “When a program is affiliated with a large education institution like OHSU,” said Ross, “you tend to attract high quality candidates.” Randy Jasa, who manages the St. Charles Family Care Clinic in Madras, is proud to see the residency program settle in Madras. “OHSU has had a good experience training medical students. They want us to train their residents,” he said. “I think that says a lot about our doctors here.”

The program brings more than doctors

Drawing from his experience running a medical residency in Klamath Falls, Ross says a medical residency can invigorate a town. “You attract people who have a pretty good income, and they come with partners, family and friends who tend to be highly educated, engaged people.” Ross says those family members may sit on boards, and open business like restaurants, coffee shops, dentist or law offices. Lewis and Ross say the residency will increase and strengthen the connections between medical resources in Central Oregon.

“When you develop a training program,” said Ross, “that compels the hospitals and clinics to engage specialists to do a clinic a week or one a month.”

Studies show medical residents tend to establish their practice within a 50- to 70-mile radius of where they trained.

Dr. Scheurich grew up and studied in urban areas, but got sold on small town living when she attended Dartmouth Medical School in Hanover, New Hampshire. She knows she’ll settle in a small town. “I like the wide open spaces and the beautiful mountains,” Scheurich said. “I could potentially live in Madras.”

Pat Kruis is a reporter for The Madras Pioneer and can be reached at the Pioneer at 541-475-2275 or by email at [email protected]. This article is used with permission of the Pamplin Media Group. Read more from Oregon’s largest source of independent local news at pamplinmedia.com.

What a wonderful plan! I wish this had been in place during my 27 years of practice in Madras as a partner of Madas Medical Group.