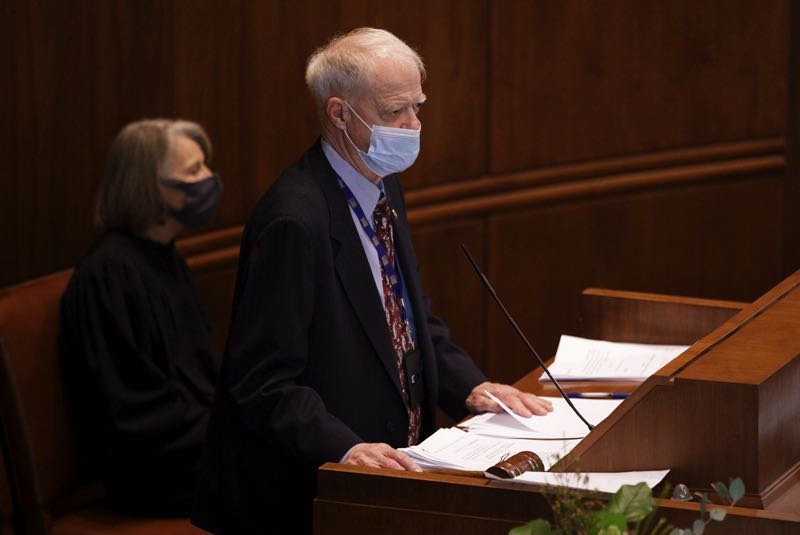 A bill to increase the penalties for assaulting hospital workers died on the desk of Oregon Senate President Peter Courtney, who has long championed equity in mental health services./Jonathan House/Pamplin Media Group

With broad support from health care workers and executives, a bill stiffening penalties for assaulting hospital employees looked like it would cross the finish line last week.

But despite a bipartisan 53-7 vote in the House, the legislation stalled and died in the Senate.

Amid a flurry of activity in the waning days of the short session, House Bill 4142 didn’t budge from the desk of Senate President Peter Courtney, D-Salem. Courtney didn’t assign the bill to a committee and it died without action.

“I have been kicked, punched, scratched, bitten; I’ve had urine thrown on me. I’ve been the victim of unwanted sexual advances,”  testified emergency room nurse Ola  Bachofner, also the sister of Rep. Shelly Boshart Davis, R-Albany, one of the bill's chief sponsors. “And I am one of the lucky ones.”

But the bill also faced stiff opposition from advocates who said it would increase the criminalization of mental illness.The increased criminal penalty wouldn’t deter someone “who doesn't have control over their … actions,” said KC Lewis, an attorney with Disability Rights Oregon. “And a longer time spent in jail or prison or the state hospital will only make their underlying issues worse.”

Thirty-four other states, including California and Washington, have similar laws in place.

The bill’s two chief sponsors were Reps. Boshart Davis and Sheri Schouten, D-Beaverton. Another 22 lawmakers from both parties signed on as regular sponsors. Schouten said the bill “died an unexpected death” in the Senate.

“It had never gotten up off the president’s desk,” Schouten said in an interview. “So somebody over there — and I have no idea who — decided they hated that bill and they weren’t even going to give it a committee hearing.”

The bill passed the House on March 1, three days before the session ended. In short sessions, bills advance quickly.

“It would have had time to move,” Schouten said.

Supporters tried to act swiftly as the session’s end loomed.

As soon as the bill passed, Schouten and about two dozen lawmakers in the House sent a letter urging Courtney to give the bill a hearing.

Schouten said they never heard back.

They made a last-ditch procedural move on March 4 — the last day of the session — to pull the bill from Courtney’s desk so it could get a vote and pass. That move failed and the bill died.

In an interview, Senate Republican Leader Tim Knopp, R-Bend, lamented the bill’s demise, saying there was time to pass it.

The bill could have gone to the Senate Rules Committee, as allowed when there is limited time for a bill to pass before the session ends, he said.

“The idea that we couldn’t raise the penalty for assaulting a hospital worker is for me, quite frankly, unconscionable,” Knopp said, adding that it will be “one of the first bills” Republicans try to pass in the 2023 session.

Boshart Davis said she will bring the bill back. A similar measure died in the 2021 session.

"HB 4142 had overwhelming bipartisan support in the House," Boshart Davis said in a statement. "And from multiple health associations, medical community, and hospital workers. I will be sponsoring and bringing this legislation back, for the third time, in the 2023 long session. Our nurses and hospital workers deserve these protections."

Courtney, who is retiring, won’t be in the Senate next year. But for the short session, Courtney said, the timing and existing concerns about the bill kept it from advancing.

“There was a lot of divided opinion on that bill,” Courtney said in a press briefing. “That’s the kind of bill, that — you put it in a short session, you better have done all the work and make sure it’s ready to go.”

Courtney added: “Time was not on our side, and I’m not winging it. It just wasn’t meant to be.”

As for Senate Republicans’ efforts to get the bill off his desk and up for a vote, Courtney called it a “very unprecedented move.”

“They tried to move the bill onto the floor directly from my office,” Courtney said. “That is a very dramatic move. It’s clever, very clever, very strategic. But I overruled that motion. It went to a vote and my ruling was sustained.”

As Courtney noted, the bill had sparked opposition.

Critics were concerned that the legislation would unfairly charge people with mental health challenges with felonies. The bill was amended to address that concern, by taking out a descriptor of “recklessly” and keeping in “knowingly” and “intentionally” as qualifiers.

Even so, concerns persisted in some quarters, including among physicians in the Legislature. Rep. Maxine Dexter, a physician at Kaiser Permanente, cast one of the votes of opposition in the House.

She filed a three-page vote explanation letter that laid out a series of concerns. For example, prosecutors currently have the discretion to charge felonies after reviewing the facts of a case, wrote Dexter, D-Northwest Portland.

“Although the word ‘reckless’ was removed from the bill in attempts to avoid targeting patients with altered mental state or mental illness, I am concerned at the court’s interpretation of ‘knowingly’ and ‘intentionally’ and hope these specifications will do enough to prevent such vulnerable populations from being criminalized in their times of need,” Dexter wrote.

Rep. Lisa Reynolds, a pediatrician, voted in favor of the bill, but did so with hesitation, she wrote in her vote explanation.

“I’ve been told he would ‘never be charged with a felony,’” Reynolds wrote. “However, I know this bill would increase the risk that a patient who is mentally ill could indeed face felony charges.”

However, she voted yes out of respect to her fellow health care workers and emergency room professionals, Reynolds said in her statement. “Our ER doctors, nurses, and staff have experienced unprecedented challenges these past two years: being on the frontline of the COVID pandemic, creating ICUs in their emergency departments for COVID patients in already overburdened hospitals, and experiencing hostility from patients who deny the science of the pandemic. They are asking for this bill and I am voting yes in a chamber where this bill has the votes to pass. I’m not particularly proud of this vote.”

Mar 10 2022
News source:
The Lund Report
Keywords:
mental health, behavioral health, worker safety
×
This article is for premium subscribers. If you are one, please sign in below.
You can see two more premium stories for free. To subscribe, click here. We depend on premium subscriptions to survive, and they are tax deductible.
Sign InGo Premium Not now