HIV Prevention Drugs Out of Reach for Many at Risk

Many at risk for the virus cannot afford a drug that's costly but is highly effective at preventing treatment.
By:
Shefali Luthra and Anna Gorman 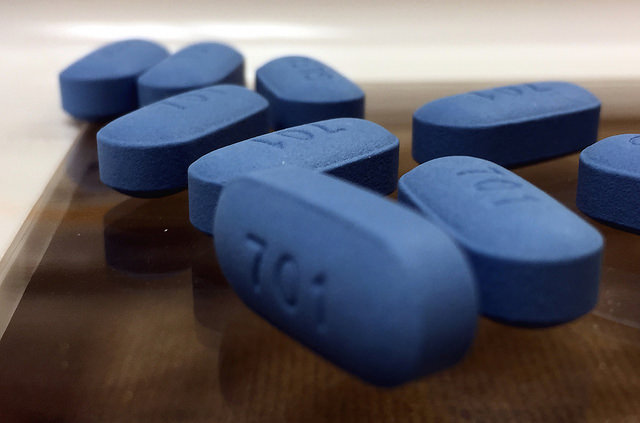 Public health officials are expanding efforts to get the HIV prevention pill into the hands of those at risk, in a nationwide effort to curb infections. But the officials are hitting roadblocks — the drug’s price tag, which has surged in recent years, and changes in insurance coverage that put a heftier financial burden on patients.

Since brand-name Truvada was approved for HIV prevention six years ago, its average wholesale price has increased by about 45 percent. Now, the drug — which rakes in billions of dollars in annual global revenue for its manufacturer, Gilead Sciences — carries a list price of close to $2,000 for a 30-day supply.

Most insurers cover the pill, also known as pre-exposure prophylaxis, or PrEP. It has been shown to be more than 90 percent effective in HIV prevention when taken daily.

But patients can get stuck with out-of-pocket costs that make it unaffordable.

“If there is any example of the dysfunction in the American pharmaceutical system, it is this case,” said James Krellenstein, a member of the AIDS advocacy group ACT UP New York. “We have the most effective tool for ending the HIV epidemic, and one reason we’re unable to scale up is because it costs so (much) unnecessarily.”

As policymakers and the health system debate how to control ever-climbing drug prices, experts say this case underscores how patients are left holding the bag.

Private health plans are making patients responsible for a larger share of drug costs. And more are restricting use of the “copay coupons” pharmaceutical companies have used to shield patients from out-of-pocket expenses. Insurers say the drug companies use coupons to steer consumers toward pricier meds. One way health plans are limiting their use is by no longer allowing them to count toward patients’ deductibles.

“This is one more thing that is going to push people off their medications,” said Jim Pickett, a senior director at the AIDS Foundation of Chicago.

Jared Wile, who lives in Chicago, started taking the drug about three years ago, when he was dating someone with HIV. Wile, who has a $2,750 deductible, used a coupon to obtain the medication. He never paid anything out-of-pocket, he said.

Gilead waives up to $4,800 in out-of-pocket expenses for commercially insured patients.

That changed for Wile this past May, when Wile learned the coupon no longer counted toward his deductible and that he would have to pay the full cost of the prescription — $1,600 per month — until he hit his deductible. Wile said he felt “blindsided” and stopped taking the medication.

“We have designed our assistance programs with the intent that people can benefit from their full value, and we cannot control the actions or decisions of health insurers,” McKeel said in an emailed statement.

The federal Centers for Disease Control and Prevention estimates that more than 1 million people are at high risk of contracting HIV, but Gilead says only about 167,000 people currently take the medication.

Beyond The Money Crunch

Price is one of many barriers — alongside patients’ lack of awareness and doctors’ hesitation to prescribe — that threaten to exacerbate the already stark disparities in Truvada use and HIV infection rates.

One major disparity is along geographic lines. The South, for example, accounts for over half of new HIV diagnoses but only about 30 percent of new PrEP users, according to data from AIDSVu, which maps HIV disease and use of the medication. HIV rates and Truvada use also vary by race and ethnicity.

“We are not necessarily seeing that those most at risk are the ones starting PrEP,” said Kristin Keglovitz Baker, chief operating officer of Howard Brown Health, a Chicago health center.

Gilead has recently gone all-in with advertising to reach people at risk, including print campaigns and TV ads that will air through the summer. Since 2012, it has spent $28 million to fund U.S. organizations that seek to raise awareness of HIV, McKeel, the company spokesman, said.

“We recognize that many people who are at high risk for HIV infection still face challenges in accessing Truvada for PrEP, and we are in regular dialogue with public health officials, advocates and physicians to better understand and, where possible, help to address these challenges,” he added.

But price is also an impediment for publicly funded programs, which have limited budgets and are now shelling out more cash for the prevention effort.

“If it was only pennies … we would be throwing it around,” said Joey Mattingly, an assistant professor at the University of Maryland School of Pharmacy. “Because of how costly it is, we have to control it.”

Some states — California and Florida among them — have launched drug assistance programs that can help patients cover the cost of the medication, along with required lab work and medical visits.

Beyond these state-based programs, some public health departments and HIV service organizations are hiring navigators to help patients navigate the maze of copays and deductibles, and to improve recruitment and retention of new users.

Washington, D.C.’s health department has doubled down on prevention, and Truvada is key in that effort, said Michael Kharfen, the department’s senior deputy director for HIV/AIDS, Hepatitis, STD and TB Administration.

Insurance usually covers PrEP, and patient assistance programs should fill any financial gaps, he said. But when that isn’t feasible, the department steps in, distributing free Truvada starter packs to at-risk patients.

Kharfen said the city in the past three years has spent almost a million dollars just on Truvada pills, which it purchases at a discounted rate through the federal 340B program, which benefits certain health care providers that treat low-income people. And because of new publicity efforts, he expects the department will need to buy and distribute more pills — posing a conundrum.

Treating more people is net positive, he said. But “how do we sustain this?”

Medicaid programs generally cover PrEP, so they confront a similar situation. Outreach efforts lead to more beneficiaries who take the drug, but that, in turn, could subject the states’ Medicaid budgets to financial hardship.

States are spending millions of dollars on the drug. California’s Medicaid program, for example, spent about $50 million in 2017 and expects the costs to continue climbing. But officials said the expense is offset by long-term savings in preventing new HIV cases.

Massachusetts’ Medicaid program spent about $22 million on Truvada that same year — about $18,000 per beneficiary, according to a spokeswoman for the agency’s Executive Office of Health and Human Services. Those figures don’t account for rebates the state receives from Gilead, which are undisclosed and considered proprietary information.

A Complex Solution, And No Competition

Patients also need regular HIV testing and medical care, which add to the cost borne both by patients and the health system. Some experts warn that Truvada’s high price point could financially undermine such broad prevention efforts.

A generic version of the drug, manufactured by Teva Pharmaceuticals, is available abroad and gained approval for use last year from the federal Food and Drug Administration. When it becomes available in the United States, it could bring down prices, though it’s unclear when that will happen. Gilead’s own forecasts reflect that expectation, showing declines in future revenue from Truvada.

For now, though, Truvada is the only HIV prevention drug available in the U.S., he said. “From a company standpoint … their best strategy is to make as much money as they can.”