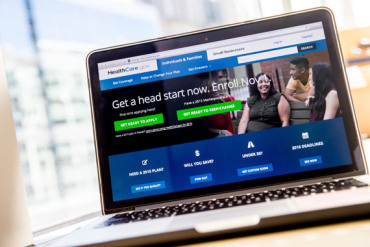 Department of Health and Human Services officials Thursday predicted that about an additional 1 million Americans would sign up for coverage under the federal health law next year and acknowledged that prospective enrollees are worried about the cost of health insurance, even with the law’s financial help.

“We know the remaining uninsured have a lot of concerns about whether they can afford coverage,” HHS Secretary Sylvia Mathews Burwell told reporters.  According to an HHS analysis, nearly eight in 10 of the approximately 10.5 million uninsured individuals likely to qualify for coverage on the health law’s online marketplaces, or exchanges, may be eligible for the financial assistance that helps people pay their monthly premiums and pay out-of-pocket costs.

[The healthcare.gov website, where people can buy health insurance, is displayed on a laptop screen. (Photo by Andrew Harnik/AP)]

The healthcare.gov website, where people can buy health insurance, is displayed on a laptop screen. (Photo by Andrew Harnik/AP)

Burwell said the agency is aiming to have about 10 million people enrolled and paying for coverage by the end of 2016. That’s about a million more than expected by the end of this year. She said the 2016 target is “a strong and realistic goal.”

The HHS goal of 10 million paid enrollees in 2016 is half of the June Congressional Budget Office estimate of 20 million health law enrollees.  Many of those potential enrollees for 2016 are from hard-to-reach groups that have yet to sign up despite two previous enrollment campaigns. It is unclear if even 2016’s tougher tax fines — $695 or 2.5 percent of income, whichever is greater — will spur the remaining eligible uninsured to sign up in large numbers. Another hurdle is that almost 60 percent of this group either doesn’t know that financial help paying for premiums is available or they are confused about how those tax credits work, according to survey data.

The HHS analysis gives a snapshot of this eligible group. Nearly half are between the ages of 18 and 34, about 19 percent are Hispanic, 14 percent are African-American and 2 percent are Asian. And more than half are men.

Varying assumptions explain the difference between the CBO estimate and the HHS target, said Richard Frank, HHS assistant secretary for planning and evaluation.  The CBO assumes that more people will lose their employer-sponsored coverage and that more individuals will move from the individual market to exchange coverage, shifts that have not occurred in numbers as large as CBO predicted, Frank said.

HHS officials said the agency plans to make a series of improvements to healthcare.gov, the federal website where people can enroll in coverage, including a new “Under 30?” tab where individuals in that highly sought after demographic group can get more information about coverage.

“While our audiences may be harder to reach, we’re working smarter to reach them,” Burwell said.