Since racial and ethnic minorities represent a disproportionate share of the uninsured, there was a call for CCOs to become more inclusive
By:
Miriam Widman

November 8, 2012 -- As the state’s coordinated care organizations ramp up, healthcare experts agree that a major advance CCOs can bring to the table is the ability to custom-design healthcare priorities based on the needs of a specific community.

But that won’t necessarily be easy, experts speaking at a conference last week agreed.

“The challenge is getting adequate representation from the community,” Benton County Health Department Director Mitch Anderson told a CCO conference on November 1. The gathering was co-sponsored by Community Health Advocates of Oregon (CHAO) and the Oregon Primary Care Association (OPCA) and attended by more than 250 healthcare professionals. 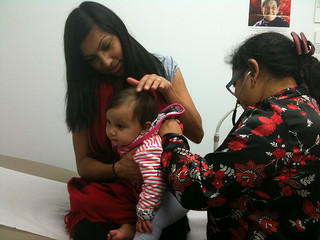 Diversity – or the lack of it – at the planning phase was a major topic of discussion. Each CCO is required to have an advisory committee that represents the community it serves.

“The danger with the advisory committee is that you get the usual members and they come to the meetings and there’s trouble with diversity,” Anderson said.

Several other panelists agreed and Delia Carmen, director of Race Matters Institute, outlined strategies on how CCO’s can be more aware and become more inclusive of its non-white client base. The Washington, D.C.-based institute offers workshops and trainings on how to promote racial equity.

She said inequities are clear when you look at the numbers. Nationwide some 50 percent of Latinos and 25 percent of African Americans do not have a regular doctor. Racial and ethnic minorities account for more than 50 percent of the uninsured, but make up only one-third of the population.

“A key priority for the new CCOs is to figure out how they can advance health equity,” she said.

Some minority community members may feel intimidated because they have no experience working on a committee and do not know how to get their voices heard, said Megan Haase, the chief executive officer of Mosaic Medical, a federally qualified health center serving central Oregon.

“People have not practiced being on a committee, and they don’t realize they have a voice,” she told the conference.

“This is a journey,” said David Ford, the president and CEO of CareOregon and a board member of HealthShare of Oregon, the state’s largest CCO that serves the tri-county Portland area.

“We’re in the birthing stages,” he added. “We’re learning and it is a learnable skill. There is some structure in what we’ve got here in Oregon that will promote that conversation.”

As an example Ford said when Cincinnati Hospital started including parents of critically ill children as members of the care team, outcomes improved. “The medical field was quite resistant to incorporate this.” But just three years later practitioners wondered how they were ever able to practice medicine without having the parents as part of the team.

State Representative Tim Freeman (R-Roseburg), whose district includes portions of mainly rural areas of Douglas, Jackson and Josephine counties, said race is not the only issue. Access is critical, he noted, and many people in his district have to travel at least 45 minutes to see a healthcare provider.

But Freeman said a key advantage of the new system is that it can be adapted to fit local needs.

“The beauty of the CCO model is that they can figure out the best solution for the community. Before it was one size fits all. Solutions for the tri-county area don’t always work for rural Oregon,” he noted.

Ford said people should view the new organizations as the basis for a “health democracy” with the emphasis on health and not on care. It is, after all, much cheaper if people are healthy and don’t need to access the system.

Image for this story by Alec Couros (CC BY-NC-SA 2.0) via Flickr.

How is health reform