mask The flood of fake 3M masks from China has been the most consistent. Courtesy of U.S. Customs and Border Protection.jpg 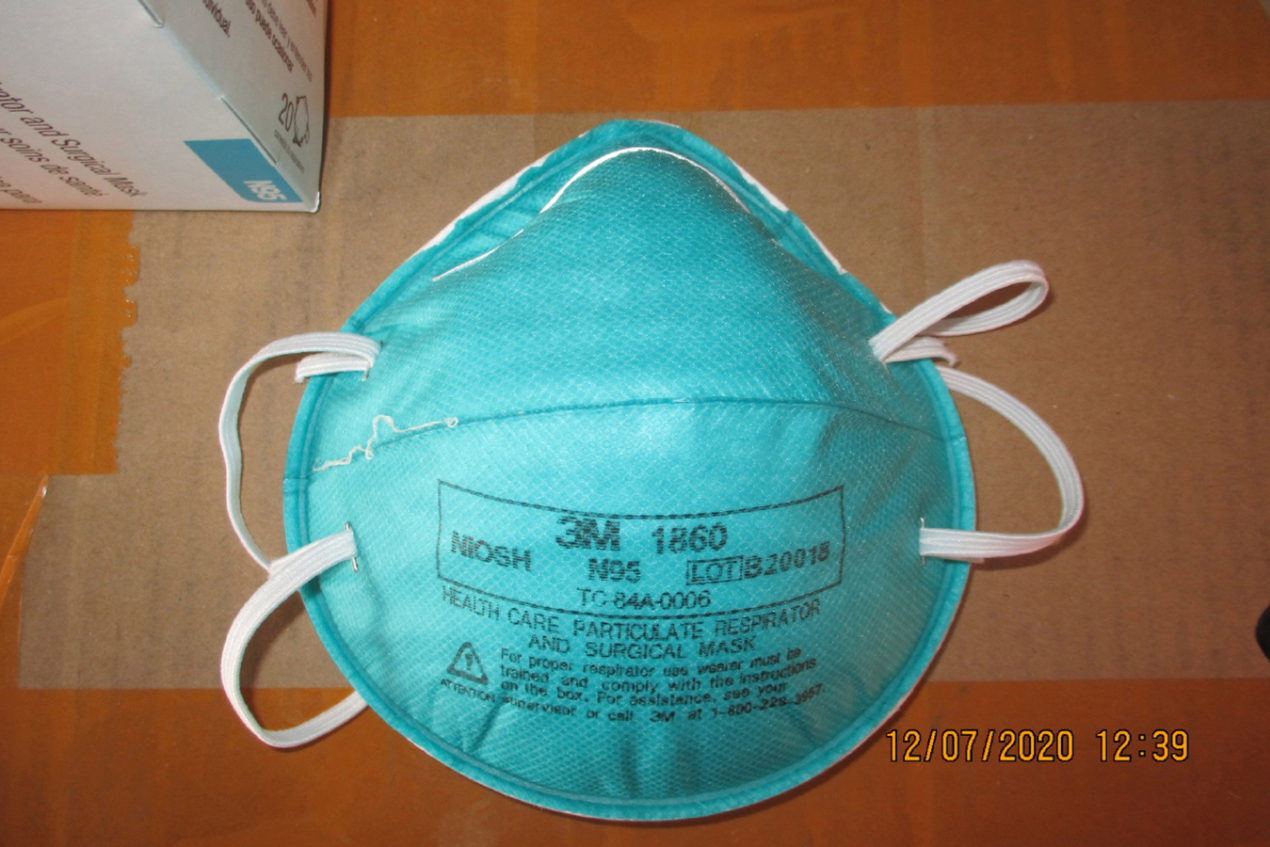 Fake 3M masks have flooded into the United States from China./Courtesy of U.S. Customs and Border Protection

Thousands of counterfeit 3M respirators have slipped past U.S. investigators in recent months, making it to the cheeks and chins of health care workers and perplexing experts who say their quality is not vastly inferior to the real thing.

N95 masks are prized for their ability to filter out 95% of the minuscule particles that can carry the novel coronavirus. Yet the fakes pouring into the country have fooled health care leaders from coast to coast. As many as 1.9 million counterfeit 3M masks made their way to about 40 hospitals in Washington state, according to the state hospital association, spurring officials to alert staff members and pull them off the shelf. The elite Cleveland Clinic recently conceded that, since November, it had inadvertently distributed 3M counterfeits to hospital staffers. A Minnesota hospital made a similar admission.

Nurses at Jersey Shore University Medical Center have been highly suspicious since November that the misshapen and odd-smelling “3M” masks they were given are knockoffs, their concerns fueled by mask lot numbers matching those the company listed online as possible fakes.

“People have been terrified for the last 2½ months,” said Daniel Hayes, a nurse and union vice president at the New Jersey hospital. “They felt like they were taking their lives in their hands, and they don’t have anything else to wear.”

According to 3M, the leading U.S. producer of N95s, more than 10 million counterfeits have been seized since the pandemic began and the company has fielded 10,500 queries about the authenticity of N95s. The company said in a Jan. 20 letter that its work in recent months led to the seizure of fake 3M masks “sold or offered to government agencies” in at least six states. After KHN sent photos of the masks the New Jersey nurses questioned, a 3M spokesperson referred to them as “the counterfeits you identified.”

At KHN’s request, ECRI agreed to test the masks that sparked the New Jersey nurses’ concern. Tests of a dozen masks showed they filtered out 95% or more of the 0.3-micron particles they’re expected to catch. (ECRI is a nonprofit that helps health providers assess the quality of medical technology.)

ECRI engineering director Chris Lavanchy said several health organizations across the U.S. have recently made similar requests for tests of apparently fake 3M masks that the company warned about.

Lavanchy said the results have shown similarly high filtration levels, but also higher breathing resistance than expected. He said such resistance can fatigue the person wearing the mask or cause it to lift off the face, letting in unfiltered air.

“We’re kind of scratching our heads trying to understand this situation, because it’s not as black-and-white as I would have expected,” Lavanchy said. “I’ve looked at other masks we knew were counterfeit and they usually perform terribly.”

3M spokesperson Jennifer Ehrlich said a critical feature of N95 masks, aside from filtration, is how well they fit.

“Without a proper seal and fit, respirators are not filtering [properly] — gaps could allow air to enter,” Ehrlich said via email.

The materials management team for Hackensack Meridian Health, which owns the Jersey Shore hospital, is “working with an independent lab on validating the quality and compliance of specific lot numbers of 3M N95 respirators the company identified as potentially problematic,” according to a company statement.

When the Washington State Hospital Association purchased 300,000 N95s in December, it sent samples to hospital leaders, who said they appeared legitimate.

“It’s not like we just ordered them sight unseen,” said Beth Zborowski, spokesperson for the association. “We had two major medical centers in Seattle … look at the quality, straps, cut them open and decide ‘This looks like it’s the real deal’ before they bought them.”

She said major hospital systems in the state bought more on their own, adding up to 1.9 million.

Throughout the pandemic, workers have also been provided with Chinese-made KN95 masks — approved by U.S. regulators on an emergency basis — that turned out to be far less effective than billed.

In April, the Food and Drug Administration, responding to dire shortages of high-quality masks for health care workers, opened the door to KN95s, which are supposed to offer the same level of protection as N95s.

Yet, as months passed, researchers from the Centers for Disease Control and Prevention, Harvard, MIT and ECRI discovered that KN95s did not meet the high standard: 40% to 70% of the KN95s failed their tests and some filtered out only 30% of the tiny particles.

More than 3,400 front-line health care workers have died during the pandemic, KHN and The Guardian have found in the ongoing Lost on the Frontline project, and many families have raised concerns about inadequate protective gear. Yet the actual harm that any substandard or knockoff device presents remains difficult to assess.

Researchers say it’s unethical to conduct a study that involves giving health workers a product they know is less protective than another when lives are at stake. And short of performing in-depth genome sequencing on each worker’s viral strain, it’s hard to know exactly how any person got sick.

His job for the past year has been investigating a wide variety of covid-related scams. Of all those cases, Rose said, the flood of fake 3M masks from China has been the most consistent.

“It’s definitely cat and mouse,” Rose said. “Where we might get better [at intercepting counterfeits], they can ship elsewhere, change the name of the company and keep going.”

Many investigations lead to seizures in the nation’s massive ports of entry, where enormous cargo ships and planes carry giant containers of goods. There, agents might spot a dead giveaway like a box just off a ship from Shenzhen, China, marked “3M” and “Made in the USA.”

“I’d like to say that makes it easier, and it does, but the sheer volume of them coming in …” he said. “It’s like a needle in a stack of needles.”

The demand for highly protective masks has surged twelvefold during the pandemic, said Chaun Powell, vice president of disaster response for Premier, a major hospital supply company. The national medical use of N95s used to be about 25 million a year, but it soared to 300 million last year, he said.

That meant hospitals and other health providers couldn’t rely on their usual sources of products to meet their need for personal protective gear.

Health care providers “had to find alternatives,” Powell said, “and that created opportunities for fraudulent manufacturers to be opportunistic and sneak in.”

Many of Rose’s investigations originate from customer complaints about apparent fakes to 3M, which forwards reports to his team. Others come from hospitals, health systems or eagle-eyed first responders who email [email protected].

Border Patrol agents, working with Rose’s team and anticipating shipments from known counterfeiters, have seized thousands of fake N95s in recent weeks, including 100,080 at a port of entry near El Paso, Texas, in December and 144,000 flown from Hong Kong to New York. In all, federal officials say, they have seized more than 14.5 million masks, many fake 3Ms but other counterfeit cloth or surgical masks as well.

The masks, which seemed flimsy and made some workers’ faces burn, were turning up in every unit of the hospital. After a union member discovered a letter on the 3M website pinpointing their mask lots as potentially fake, managers began to remove the masks but suspected fakes continued to turn up, McCann said.

Hackensack Meridian said a daily call with hospital leaders includes “reminders to report any suspect PPE so that it can be removed immediately and evaluated.”

The episode added stress to caregivers who are terrified about getting infected and bringing the virus into their own homes.

“Nurses are scared to death,” McCann said in mid-January as the masks continued to pop up, “because they’re not being provided with the proper PPE.”

Eli Cahan contributed to this report.