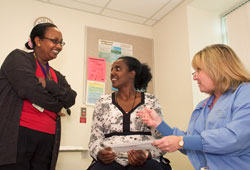 What kind of physical and mental health problems top the list among Health Share’s 252,000 members?

This data “over time will look at closing the gap for people experiencing the greatest disparities,” said Sonja Ervin, a community advisory member at its meeting last week.

For adults over age 65, a whopping 53 percent reported high blood pressure, 29 percent had diabetes with chronic heart and kidney disease and obesity rounding out the remainder. .

But the data doesn’t tell the whole picture, said Katie Cadigan, Health Share’s data analyst. Among children who speak Spanish, obesity and asthma are the most prevalent, while Russian language speakers have the lowest rates. Also, the data doesn’t indicate whether such children are healthier or just not accessing services.

Amy Anderson asked if adverse childhood experiences could be embedded in the data. “If a child experiences ACEs, they’re going to have 95 percent of those chronic conditions you listed.” To truly improve health, “will we expand beyond what we’re required to do?” she asked.

“There will be many more discussions moving forward as we develop strong relationships and continue to build trust in the community,” said Clark. “It’s exciting to have new sources of data for the first time and look forward to making meaning of the information together with our Council and community members.”

Among Health Share’s membership, 41 percent are children and 23 percent select a language other than English (usually Spanish). And, 25 percent need an interpreter, said Dalila Sarabia, with state officials scrambling to certify another 300 language interpreters.

About 45 percent of Health Share’s members are people of color, and they represent 47 percent of Multnomah County’s African immigrant population and 47 percent of the state’s Asian and Pacific Islander population.