The new marquee drug Sovaldi has been a boon for its manufacturer, provoking big concerns among coordinated care organizations. But competition should soon eliminate its monopoly and help the healthcare system pay for this promising new cure for a deadly disease.
By:
Christopher David Gray 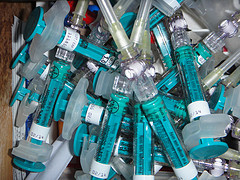 Near the start of the year, a new drug came on the market, one that could cure Hepatitis C, halve the length of treatment time and for some types of Hep C, be taken without injections of Interferon.

“Interferon had so many side effects that a lot of people had to withdraw from that,” said Katie Lueken, the medical director at Willamette Valley Community Health, the coordinated care organization in Salem.

But at $80,000 for a course of treatment, or $1,000 a pill, the price of the new drug, Sovaldi, has insurance companies and coordinated care organizations scrambling to know if they’ll be able to cover it.

Sovaldi’s manufacturer, Gilead Sciences, is already on track to rake in $9 billion in sales this year alone.

California has estimated the tab would be $9 billion to treat everyone in its state with the disease. Extrapolating from that figure, FamilyCare CEO Jeff Heatherington put the pricetag at $1.2 billion.

“In the end, we cannot deny a cure which is a terrible disease,” Heatherington said.

But Dr. Atif Zaman, the director of hepatology at Oregon Health & Science University, says there is a middle approach that can get the neediest patients their cure now, while delaying care -- and the cost -- for others, without putting their lives in danger.

Zaman agreed that Medicaid, Medicare and commercial insurers would have a huge problem on their hands if they tried to treat everyone. “It is not possible that every Hep C patient could be treated. It will break the bank.”

But, he said, there is a very careful, fair, and science-based approach that could help temper the sticker shock and still get people a cure. Zaman recommends prescribing Sovaldi for patients with late stages of the disease, especially those with cirrhosis of the liver, also known as Stage IV.

Zaman said these patients have too much too lose not to get treated. Cirrhosis can easily lead to liver cancer and death. A liver transplant costs $300,000 and patients must wait months if not years to get a new organ. They’d then be on drugs to keep their body from attacking the new liver for the rest of their life, at the cost of $40,000 a year.

But for less aggressive stages of the disease, treatment can be delayed.

“I tell my patients, we’re waiting for a safer, more effective regimen that you will take for a shorter length of time,” Zaman said. “Most patients can wait for one year. You don’t lose much by waiting.”

One reason Sovaldi is so expensive -- and its manufacturer, Gilead Sciences, has charted record profits -- is that it’s the only drug of its kind. But the U.S. Food & Drug Administration is expected to approve three competing drugs before the end of the year, and market forces should drive down the cost of treatment while improving care.

Sovaldi can be taken orally with for genotypes II and III, but it must still be used with hazardous Interferon to work for the most common form of Hep C, genotype I.

Zaman said a year from now the lower cost and safer treatment should allow health insurers and CCOs to offer the cure to stage II patients. These patients had been offered a previous, longer treatment using the drug Pegintron with Interferon, but since their disease can take years to become life-threatening, that Interferon treatment is no longer recommended for this group.

The disease progresses very slowly, taking five to seven years to advance to the next stage, if it advances at all. Only about 20 percent of disease carriers ever reach the end stage -- stage IV liver fibrosis, or cirrhosis of the liver.

The earlier course of treatment with Pegintron, wasn’t exactly cheap, either, costing about $60,000 for a 24-week course, without counting the cost of Interferon. Sovaldi only needs to be taken for 12 weeks.

The new drugs awaiting approval are better than Sovaldi -- Zaman said they may cure the disease for all genotypes without injections of Interferon.

The protocol Zaman describes has been adopted at Willamette Valley, which has 386 members known to suffer from Hep C, but only one who has started treatment on Sovaldi. Other CCOs are likely to follow the lead of Salem’s coordinated care organization, which uses the treatment for patients with Stage III Hepatitis, as well as Stage IV, where cirrhosis of the liver has set in. By contrast, the Veterans Affairs health system is only giving Sovaldi to those patients who have cirrhosis.

The disease is so pervasive in American society that the U.S. Centers for Disease Control and Prevention has recommended that every baby boomer get tested, regardless of their risk factor. The disease is transmitted through the blood and the most common way of passing the disease is through intravenous drugs, like heroin, or intranasal drugs, like cocaine, where nosebleeds can help the virus travel through shared straws.

Zaman said the disease can be transmitted sexually, but it’s rare. He has patients who have carried the disease for 30 years without their spouse becoming infected.

It’s also very possible that patients acquired the disease from blood transfusions, in the days before 1992, when he nation’s blood supply wasn’t screened for Hep C. Some boomers have carried it for decades without knowing it.

As many as 80,000 Oregonians know they have Hep C, but the real number in Oregon might be as high as 300,000. Zaman said three-quarters of Hep C carriers don’t know they have it. The disease affects anywhere from 2 to 8 percent of the population.

In pockets of the population where drug use is high, such as the low-income populations covered by Medicaid, it’s even higher. Zaman said as many as 30 percent of prisoners have Hepatitis C.

Hepatologists break the disease down into four discrete stages, the last of which is cirrhosis of the liver. The disease is further complicated with seven different genotypes, although the vast majority of patients -- 70 percent -- have genotype I.

About 10 percent of Hep C patients have cirrhosis, and about 20 percent are in Stage III. Half of all patients are in an early stage without symptoms.

Christopher David Gray can be reached at [email protected].
Image for this story by Jay Cross (CC BY 2.0) via Flickr.
May 14 2014
News source:
The Lund Report

Sovaldi Not Being Prescribed for Patient with Cirrhosis

I just don't understand. Why if Gilead will pay for the Sovaldi, then why can't Dr. Zaman prescribe it?