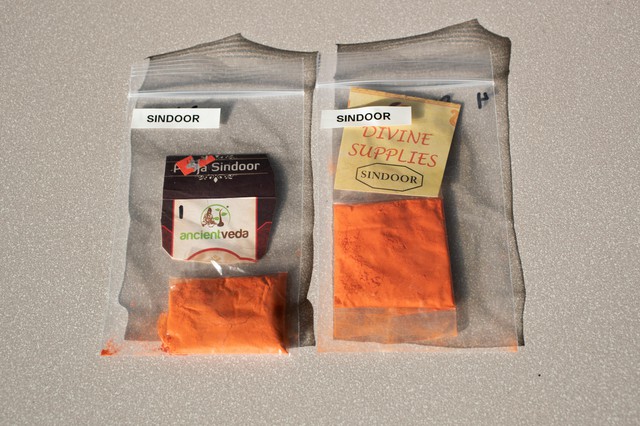 These bright red-orange powders are used for Hindu religious purposes among communities from South Asia. Lead is sometimes used to brighten the color or increase the weight of the product. People can be exposed to lead when powders that contain lead enter the body through the eyes or mouth./Multnomah County

Oregon health officials are warning people about “alarmingly” high levels of lead found in some turmeric and cosmetics traditionally used in South and Southeast Asian cultures.

Officials shopped the Portland area for several products. These included the traditional black eyeliner, kohl, four brightly colored Hindu festival powders, and turmeric that had been hand-carried into the country.

Perry Cabot with Multnomah County said one brand of black eye ore was 58 percent lead, or 58,000 times the recommended limit.

“We’re recommending that families who use these products contact us with questions. We can potentially test the products or we can guide them to how to get them tested,” said Cabot.

State and local health officials said the alarming levels of lead were found in cosmetics used in Hindu and Muslim religious practices.

They’re working with refugee and immigrant communities to get the warnings out in a culturally sensitive manner.

“We fully respect the deep cultural and spiritual traditions of our diverse communities,” said Ali Hamade, a toxicologist and epidemiologist with the Oregon Health Authority.

“Children and pregnant women are most vulnerable to lead poisoning, so we’re asking for help from families, community leaders, shop owners and public agencies to recognize the risk and prevent harm.”

Products of concern include Sindoor, Kumkum, Tikka and Roli, the bright red-orange powders commonly used for Hindu religious purposes. Lead is sometimes used to brighten the colors or to increase the weight of the product.

Officials are also warning about hand-carried turmeric, the yellow-orange spice frequently used in South Asian cuisine and medicine. Health officials say lead is sometimes added to make the turmeric to make it appear more colorful and “to cover insect damage.”

Health officials said they’re “primarily concerned about the spice hand-carried into the United States from India or Bangladesh,” and that lead is unlikely to be found in turmeric bought from major US supermarket chains.