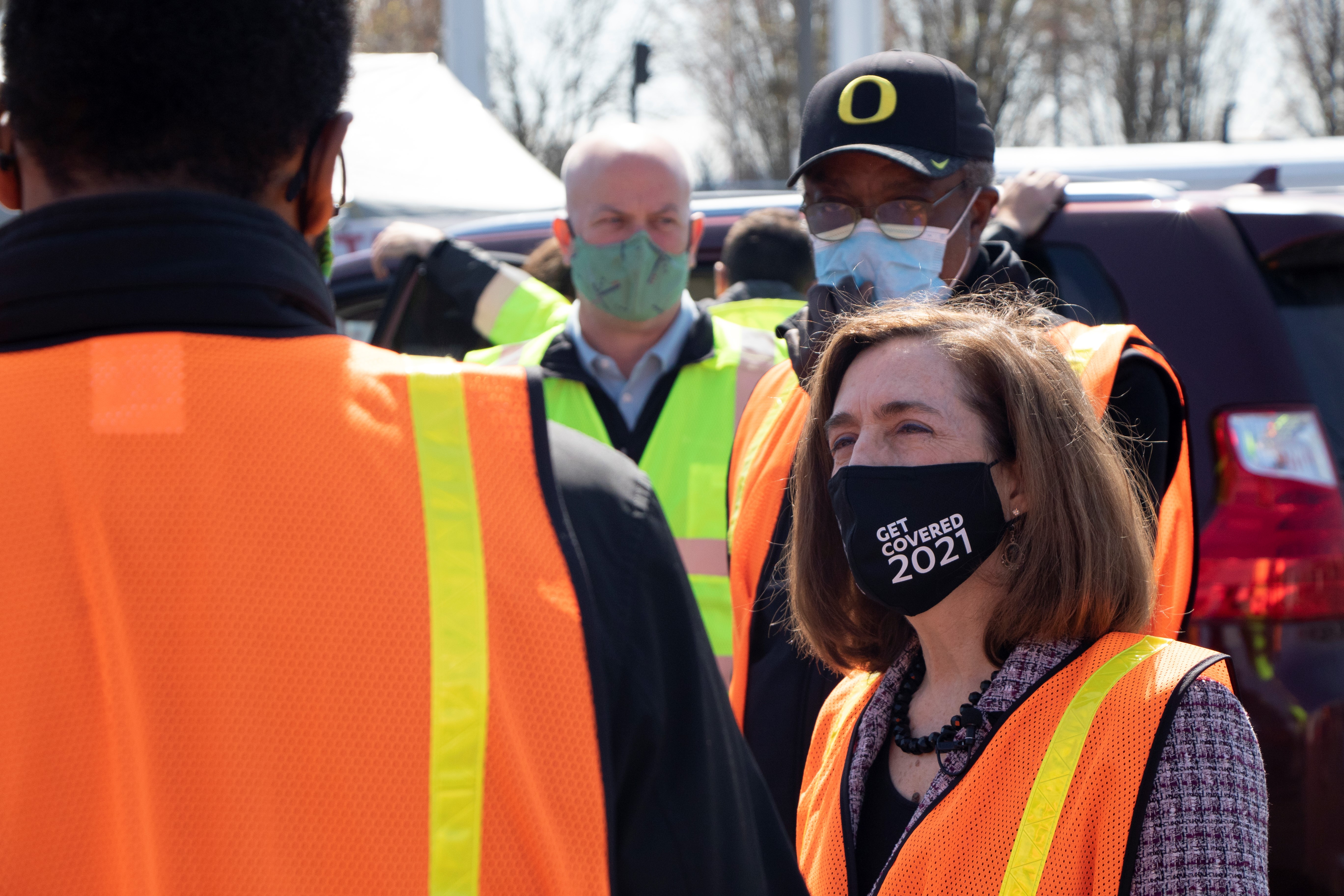 Gov. Kate Brown said Tuesday she will lift most of Oregon’s COVID-19 restrictions statewide when 70% of Oregonians 16 and older have received at least a first dose of vaccine.

Brown’s announcement sets a target for Oregon to move beyond the pandemic. The goal signals what public health officials have said all along: vaccinations are the pathway out of COVID-19 restrictions.

Currently, nearly 60% of Oregonians 16 and older are vaccinated, state data show. That puts Oregon about 10 percentage points away from its statewide goal -- or 430,000 people.

About 49% of the entire state population is vaccinated, though Oregon has not yet started to vaccinate children under 16. But even when Oregon reaches the 70% goal Brown set Tuesday, the state will remain short of the level needed for herd immunity, the point at which the virus begins to die out for lack of hosts. That’s estimated at 75% or more of the total population.

Individual counties can move down in risk categories with restrictions lifted before the state reaches the 70% threshold, Brown said Tuesday. Starting May 21, counties with a 65% vaccination rate will be eligible to move to the lower risk category in the state’s framework COVID-19 risk that assigns public health restrictions. Like the statewide goal, that target is also for residents 16 and older who have received a first dose. To qualify, counties also will need to submit a plan with steps to close equity gaps in vaccine distribution.

“Thanks to you, Oregon, it looks like we’ve crossed the tipping point of the fourth (virus) surge,” Brown said. "Our hospitalization rates have stabilized. Our infection rates are on a downward trajectory. And in the race between vaccines and variants, our efforts to vaccinate Oregonians are taking the lead. We still have some work to do to reach our 70% goal, but I am confident we can get there in June and return Oregon to a sense of normalcy.”

The vaccine is only available for adults and youth 16 and older, although the federal Food & Drug Administration on Monday approved emergency authorization for use on children 12 and older. It’s unclear when children 12-15 will be allowed to get the vaccine, but it could be within days. A federal advisory panel still needs to review the FDA authorization, as does a western regional group of experts that will make recommendations to governors in Oregon, Nevada, California and Washington.

For now, the 70% target only applies to people 16 and older. It’s unclear if the state will change the target’s age range once children under 16 become eligible.

So far, Oregon has vaccinated about 2 million people with at least one dose. In order to hit the 70% target, the state will need to vaccinate another 430,000 people 16 and older.

State officials appeared confident that Oregon could hit that target in June. Different state projections show Oregon could reach a vaccination rate of 70% to 80% in mid to late June.

However, Oregon Health Authority Director Patrick Allen stressed much work remains to reach that target and urged every eligible Oregonian to get vaccinated.

“We can’t pretend the pandemic is over,” Allen said.

Once Oregon reaches the 70% threshold, the new normal still will look different from pre-COVID times. Oregon may continue to require face masks and physical distancing as it continues to evaluate the state’s COVID-19 conditions and receive guidance from the federal Centers for Disease Control & Prevention.

However, once Oregon hits that target, counties will no longer be assigned risk levels in the state’s framework for COVID-19 public health measures. That framework has four risk levels and sets restrictions such as whether restaurants can have indoor dining and capacity limits for restaurants, bars, retail outlets, gyms, and entertainment venues. That means that there would no longer be capacity limits on restaurants, events and retail outlets or restrictions on the sizes of gatherings for social and public events like concerts and rodeos.

The 70% target is not the final step, either. It comes nowhere close to herd immunity, as the 70% counts only eligible people 16 and older, not the population as a whole.

Estimates vary on what vaccine rates are necessary to reach herd immunity, but they range from 75% to 85% of the population.

“We’re not at all talking about herd immunity,” Allen said.

As a result, vaccination efforts will continue even after Oregon reaches 70% of people 16 and older.

Officials acknowledged that the 70% statewide target could be reached even when some individual counties have vaccination rates well below that.

Asked about the wisdom of opening up counties that could become virus hotspots, Brown said that public health efforts, including contact tracing, will continue.

Hood River County, located along the northern state’s northern border east of the Portland metro area, has a population of about 23,000. The county turned to an army of volunteers as it marshaled its vaccination push.

About 300-400 volunteers have run phone banks, administered vaccines and worked on logistics.

The county has had mass vaccine clinics that reached 1,000 people.

“We’ve been really lucky we have a very active volunteer corps here in Hood River,” Trish Elliott, director of the county health department, said in an interview.

The county set up a phone bank with Spanish and English-speaking volunteers to reach different groups of people. It also worked with providers, including Providence Health and Services and One Community Health, a federally qualified health center that provides primary medical care for low-income and under-served communities.

“We’ve worked in a real coordinated fashion to make sure that we were reaching as many  different populations as we could,” Elliott said.

A hospice provider, Heart of Hospice, did a “tremendous amount” of home visits to people who are homebound, Elliott said. The county also coordinated with the local transit agency to drive people to vaccination events.

Lake, Malheur and Umatilla counties, in comparison, have the lowest vaccination rates, ranging from 31% to 32%, state data show.

Malheur County Among The Laggards

In Malheur County in rural eastern Oregon, public health officials continue to urge residents to get vaccinated. While state data show that just over 31% of the eligible population is vaccinated, county officials say that number doesn’t account for about 1,800 county residents vaccinated in neighboring Idaho. However, Malheur County still has a low rate when factoring in those doses.

“Best case is that 39% of our eligible population has received at least one dose of vaccine,” Malheur County Health Department Director Sarah Poe said in a statement. “That means we still have thousands of people who need to be vaccinated.”

As mass vaccination sites wind down, other provider groups will continue to offer vaccines. These include primary care providers, hospitals and federally qualified health centers.

Community health centers treat groups of people who may struggle to access medical care, such as migrant communities and people of color.

“As trusted community providers, Oregon’s 34 community health centers are dedicated to equitably vaccinating patients and those in their community against COVID-19 as part of their ongoing effort to further reduce health disparities laid bare by COVID-19,” said Joan Watson-Patko, executive director of the Oregon Primary Care Association, which represents the centers, in a statement.

Watson-Patko said the centers are “uniquely positioned to assist in vaccinating Oregon’s vulnerable and hard-to-reach communities, including people experiencing homelessness and poverty, Black, Indigenous, and People of Color (BIPOC), agricultural and migrant farm workers, and people living in rural and frontier communities.”

The state will announce on May 18 the counties that qualify to move to lower risk on May 21.

Oregon now longer meets the statewide hospitalization benchmarks for extreme risk, the most restrictive category that bans indoor restaurant dining. To reach that category, the state needs at least 15% growth each week in COVID-19 hospitalizations and at least 300 people hospitalized with COVID-19.