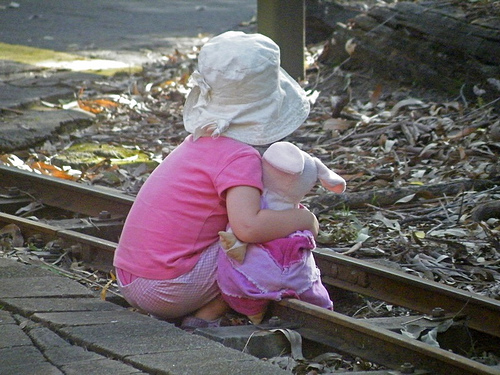 July 11, 2013 – Visits to the Children's Center in Oregon City usually start with a call to the child abuse hot line – and end with the gift of a quilt and a teddy bear.

If the Department of Human Services or a law enforcement officer determines after follow-up that a child should be seen, the child, along with a parent or other caregiver, visits the center, which is one of 21 like it in the state. The family spends several hours at the center, discussing options and performing health screenings – as well as conducting a forensic interview which, if the child consents, is recorded and used in court.

At the end of the visit, the child is given the chance to pick out a stuffed animal and a blanket – and often, executive director Barbara Peschiera said, children light up, despite the difficulty of the visit, which takes several hours.

“They're happy and skipping,” she said, as if the weight of living with the abuse has been lifted. “We get to return their childhood to them.”

Children who visit the clinic are then connected to resources – including family therapy and mediation, as well as legal resources if the family needs them – that will help in the healing process.

Seventy percent of families who visit the Children's Center are on the Oregon Health Plan, which only reimburses for the pediatricians' exam, not the forensic interview, the referral services or drug tests (ordered only if child is believed to be endangered by a caregiver's drug abuse) – services for which there are no billing codes.

Children's centers don't bill children's families for abuse-related exams, instead recouping after-insurance costs through crime victim's compensation and grants or donations – according to Shelly Smith, who serves executive director of Bend's Kids' Center and leads a coalition representing all the children's centers in the state, and each exam costs $1,800. Private insurance, if the family has it, may pay for up to 50 percent of the costs incurred during the exam, whereas OHP pays $207 for the total visit, Smith said -- and statewide, the percentage of Children's Center patients on OHP is higher, close to 90 percent.

Smith added that revenue at children's centers has dropped off sharply over the last four years due partly to the recession, which has decreased the number of Oregonians with private insurance, and partly due to legislation that enables every child in the state to enroll in OHP, regardless of his or her parents' income.

“We're getting less money from the state to do our work, we get less money from reimbursements. All the while the number of kids coming into our centers is going up,” Smith said, adding that a few centers, particularly in rural areas, have had to reduce the number of days they are open, and trim staff time, in order to keep going.

“This is the issue that we're looking at in a lot of different areas. There are a lot of different services that aren't code-able,” said Rosa Klein, chief health strategy officer at Health Share of Oregon, one of the two coordinated care organizations created to serve OHP patients in the tri-county area, has to do with billing.

Creating billing codes for those services may be beyond the state's purview, Smith said, instead being a matter for the Centers for Medicare & Medicaid Services.

Still, Klein said, it's possible that the idea of the “global budget” component of state health transformation – which allows for more flexibility in Medicaid spending – has the potential to help increase reimbursement for the non-clinical component of children's centers' work.

Peschiera said investing in child abuse intervention is consistent with the philosophical underpinnings of coordinated care – the idea that healthcare dollars should be invested in prevention and in services likely to have good long-term outcomes.

The medical interventions at children's centers don't just address injuries or medical problems directly related to abuse, she said. Often pediatricians discover side effects of severe neglect, such as malnutrition, or catch issues the family hasn't had time to deal with, like making sure the child is up to date on vaccinations and dental care.

In addition, research suggests that intervening early in cases of child abuse – that is, removing the child from the abusive situation and ensuring he or she gets appropriate treatment – improves the child's chances of growing up to be a healthy adult.

In 2009, researchers found a strong correlation between adverse childhood experiences and poor health outcomes as an adult. Not only were adults who had been abused as children more likely to experience mental health challenges directly related to their trauma, they were more likely to develop heart, lung and liver conditions, and to be obese as adults.

“We have the opportunity to say, 'This saves the system money,'” Peschiera said.

“The Children's Center is one of the laundry list of things where there's like perverse incentive,” Klein said. “Even now, the prevention strategies that we have are so far downstream. It's once you have a chronic disease that we're willing to pay for it.”

Image for this story by Andy Bernay-Roman (CC BY-ND 2.0) via Flickr.