Game Not Over For Higher Taxes For Beer, Wine In Oregon

The Oregon Health Authority asked Gov. Kate Brown to hike taxes on beer and wine but she balked, saying it would be too hard a lift. But the issue is likely to come up again in the legislative session next year.
By:
Christian Wihtol 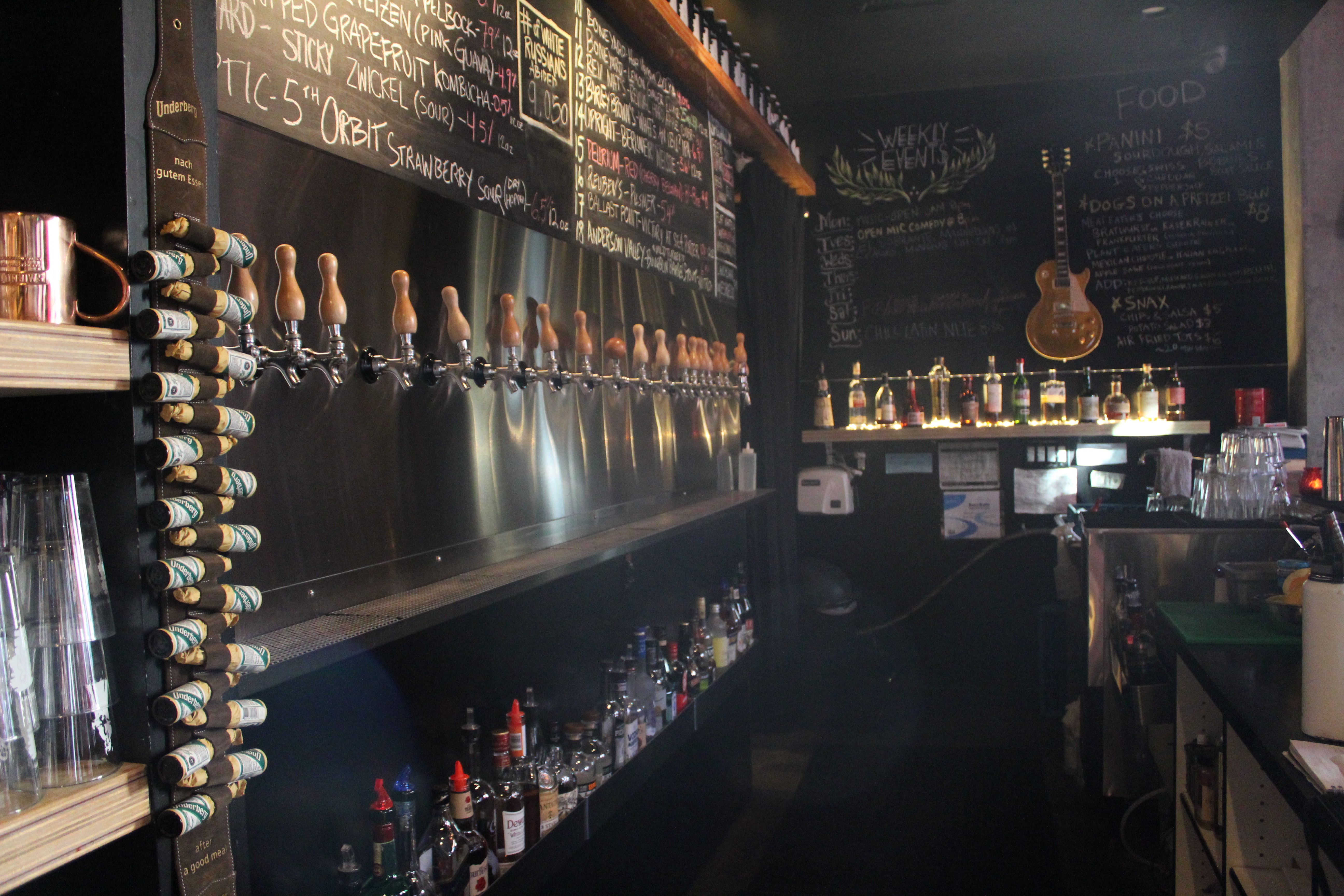 In their recent budget pitch, experts at the Oregon Health Authority were clear in declaring “excessive alcohol use” a scourge that fuels domestic violence and leads to birth defects, car wrecks, liver disease and cancer, killing some 2,000 people a year in Oregon.

“Alcohol is inexpensive and easy to get in Oregon,” the agency wrote in its budget plan for the 2019-2021 biennium. “As a result, excessive alcohol use and many of the problems it causes are on the rise.”

The solution? Increase the taxes on beer, wine and cider enough to raise retail prices by 10 percent, the agency said. That would yield the state $500 million in the coming biennium, compared with the expected $36 million under the current tax rate.

“The most effective policy tool we have – increasing the price – remains unused,” the agency lamented.

But like a mug of beer left out overnight, the idea of a tax hike quickly went flat.

Gov. Kate Brown let the concept sit for a few days, then declared she wouldn’t include it in her budget – although she proposed increasing cigarette taxes to raise money and cut down on tobacco use, and asked for a modest increase in the tax on hard alcohol.

“I know the (Oregon) beer and wine tax hasn’t been increased in 30-plus years,” Brown said during a conference call with reporters. But passing a beer and wine tax hike “is a tough fight at the Legislature and we’re not likely to be successful.”

The wine and beer industries are Oregon icons that draw tourism, provide jobs and give the state cachet. Something of fiscal darlings, the industries have enjoyed tax breaks from municipalities eager to reap the economic benefits that wineries and breweries bring.

Once centered in the Willamette Valley, Oregon’s vintners now are a presence across the state, while breweries have spread from the Portland area to the east, west and southern parts of the state.

With the expansion, many Oregon breweries have received property tax breaks under the state enterprise zone program that in the past typically went to high-tech or other manufacturing companies. In the past several years, roughly a dozen breweries in Lane, Deschutes, Benton and Lincoln counties, for example, have received three-year property tax waivers totaling millions of dollars to encourage their expanded production and job creation, state figures show.

Despite their numbers, Oregon’s beer and wine industries are not politically active. They don’t pour money into campaign coffer, though national brands do.

But though Oregon’s industry lacks a muscular lobby in Salem, it’s got political clout on the ground.

“Oregon has at least one brewery in every county of the state, and the beer, wine and spirits industry contributes billions to the state’s economy in the form of taxes, jobs, tourism and economic development,” said Danelle Romain, executive director of the Oregon Beer & Wine Distributors Association. “So, it’s no wonder that the governor and legislators pause when faced with this question of increasing taxes on their own homegrown industry for questionable benefit.”

Brown’s budget is not the final word. Some lawmakers told The Lund Report they want to look at raising beer and wine taxes, and that those industries should offer a tax proposal and take more responsibility for the harm their products can cause.

Sen. Floyd Prozanski, D-Eugene, a municipal prosecutor, said that in his experience, the leading intoxicant that drives crime “hands down is alcohol, period. There is nothing that comes even near alcohol.”

“There is a valid reason for us to increase the current (wine and beer) tax level,” he said.

The Oregon Health Authority says that excessive drinking costs the state $3.5 billion a year in lost productivity, disease, car crashes, criminal justice expenses and the like.

But she suspects Democrats -- who will hold supermajorities in both chambers in the 2019 session and therefore could approve tax increases without GOP support -- may opt for other tax hikes over those on beer and wine.

“Even among Democrats there are only just so many tax votes that we can stomach,” Monnes Anderson said.

But tax increases of some kind are likely to be on the table. Brown’s proposed biennial budget calls for a whopping $2 billion increase in K-12 spending but she’s not identified a revenue sources. She’s left it up to legislators to scrape up new money.

If a tax increase were presented as a levy on out-of-state “big alcohol,” lawmakers and the public might accept it, said Jim Moore, a professor at Forest Grove-based Pacific University specializing in Oregon politics. “Unless those businesses buy into the tax, it will not be popular among lawmakers.”

Prozanski said he’d exempt small wineries and breweries – that is to say, all of those headquartered in Oregon – from any tax increase. “We don’t want to have an adverse impact on an industry that produces family wage jobs (in Oregon),” he said. He said he’d impose any tax increase only on large-volume producers.

Health experts at  the federal Centers for Disease Control and the World Health Organization say higher prices cut alcohol consumption. Several studies back that up, while other are more nuanced.

“The policy of taxing the entire consuming population to manage a small percentage of abusers typically does not work,” said Lester Jones, chief economist for the National Beer Wholesalers Association. “It is basically unfair tax policy that is both regressive on lower income moderate consumers of alcohol and does not really change the behavior of the heavier consumers of alcohol.”

The state reaps $230 million a year from the sale of hard alcohol, thanks to an average markup of more than 100 percent. Brown proposed raising that even more in her budget. She also asked for a $2 per pack hike on the tobacco tax which brings in $200 million a year. But she stayed away from beer and wine which raises a measly $18 million a year.

That’s because Oregon’s taxes on beer and wine are incredibly low. At 8.4 cents a gallon, Oregon’s tax on beer is the nation’s lowest, according to a state review. The tax on wine, at 67 cents a gallon -- or 13 cents on a standard 750 milliliter bottle -- is the fifth lowest in the nation.

Pressure from the wine and beer lobby has kept those taxes low, said Janet Bauer, a policy analyst for the Oregon Center for Public Policy, a liberal think tank.

The single biggest powerhouse in state alcohol politics isn’t a homegrown company. It’s St. Louis, Mo.-based Anheuser-Busch. From 2016 to the present, the company has donated nearly $400,000 to Oregon legislators and to political campaigns in the state, filings with the Oregon Secretary of State’s Office show. The company is a regular donor to most members of the Oregon Legislature as well.

Take Monnes Anderson. She waxes eloquent on the harms caused by excessive alcohol use and on the societal benefits of higher alcohol prices.

But she’s equally sold on the economic value of Oregon wineries and breweries.

“We’re becoming nationwide and worldwide known for our beer and for our wine, and we love the tourism that it draws. We don’t want to hurt them,” she said.

But the health and state budgetary benefits of a tax increase are plain, she said. “Even the industry must realize that,” she said.

Bauer said revamping beer and wine taxes should be part of “a broader conversation about how we finance our state operations.”

“This is something that should be on the table regardless of the challenges,” Bauer said.

Monnes Anderson said state lawmakers sooner or later will focus on increasing beer and wine taxes. The state’s Alcohol and Drug Policy Commission is launching a broad two-year study of alcohol/drug problems, programs, funding and taxation, she said. Advocates for higher beer and wine taxes may hold their fire until that’s done, she said.

We didn't give a second thought to taxing cannabis for all but medical card holders.