Former Gov. John Kitzhaber Calls On The State To Hit The Pause Button

John Kitzhaber and DJ Wilson at State of Reform.jpg 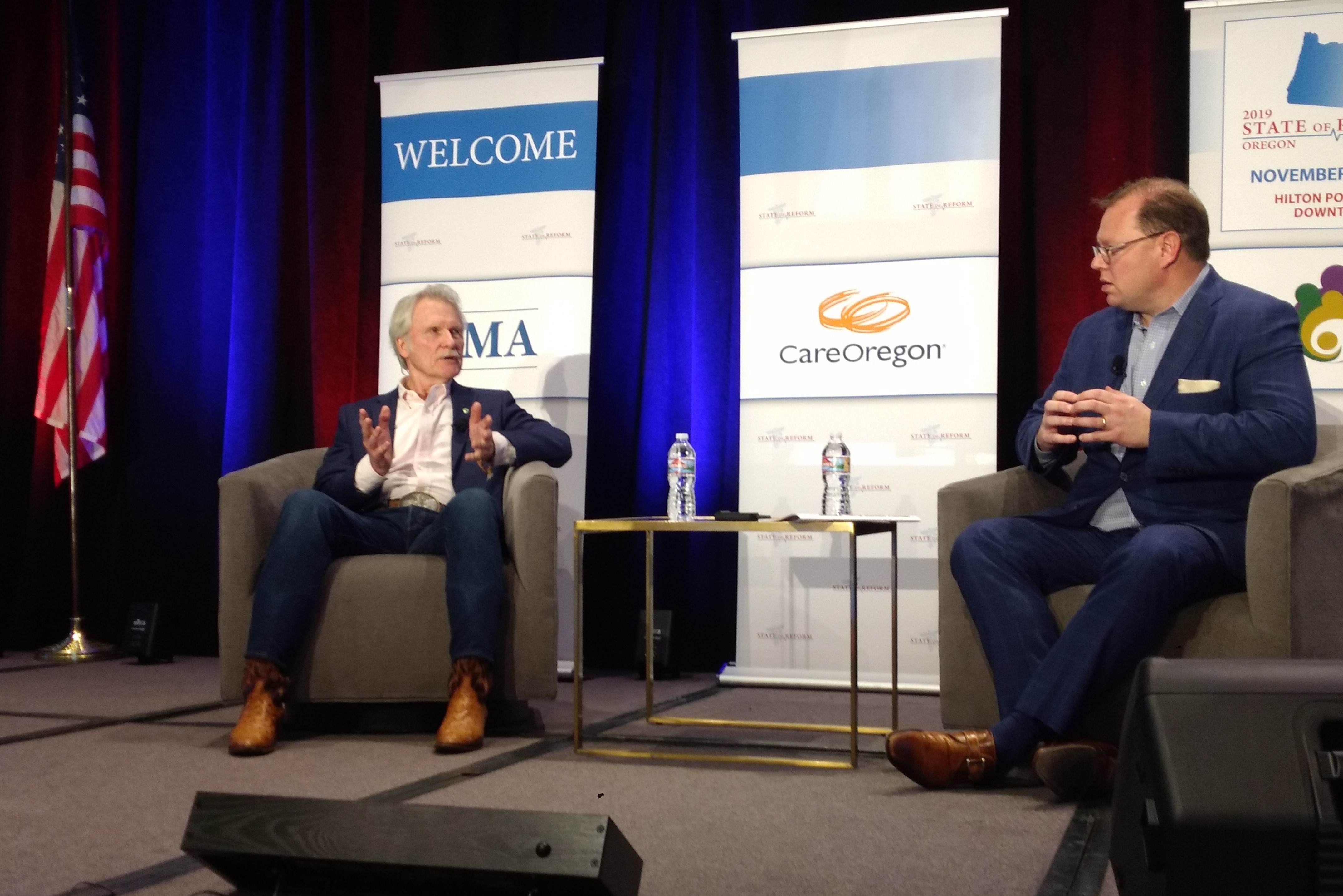 Former Gov. John Kitzhaber is not giving up.

Four years out of power, he still uses public speaking appearances to voice his concerns about the direction of the Oregon Health Plan, the state’s Medicaid system that covers nearly 1 million Oregonians at a cost of more than $6 billion a year.

He fears the program, which he played a large role in creating and shepherding into existence as a longtime legislator and governor, risks falling apart.

“At some point in the next five or 10 years we will be operating on a significantly constrained budget,” he said during a keynote address ending the State of Reform conference this week in Portland. When that happens, he fears the plan could be squeezed and people could lose their coverage.

That was the situation that led in the first place to the creation of locally based coordinated care organizations that act as insurers for Oregon’s poorest population, he said.

“We had a $1.2 billion dollar hole in the Medicaid budget that without revenue would have disenfranchised tens of thousands of Oregonians,” he told the crowd. “That created a certain intensity and motivation to come together.”

But now, five years after the first round, the state is charging forward with a new iteration, heaping new responsibilities and constraints on the CCOs without giving careful, collaborative thought to the desired endpoint, he said.

It’s time to hit the pause button, he said.

“We might be on absolutely the right track, but let’s just slow down a minute, let’s bring the CCOs to the table, let’s talk about the problems we’re trying to solve, the obstacles that we’re trying to overcome and then let’s start again together,” he said.

Kitzhaber said the CCO system was built on a “learning collaborative” which involved regular meetings among officials and coordinated care leaders, who’d get together, hash out ideas and share experiences. He said that’s what’s needed now. He called on Gov. Kate Brown and legislative leaders again -- after sending them a letter in September to reorganize these sessions to ensure that everyone is working together for the same goal.

Kitzhaber is clearly worried about the Medicaid contracts that the Oregon Health Authority recently awarded to 15 companies. The contracts take effect on Jan. 1 and most will run for five years. They span Brown’s priorities, which include an emphasis on behavioral health care, moving towards a payment system that rewards insurers for outcomes rather than reimbursing them for procedures, cost control and a focus on social determinants of health. That includes things like education, employment and housing.

Kitzhaber questions whether coordinated care organizations are the right entity to deal with that.

Kitzhaber clearly opposes the health authority’s approval of a Medicaid contract in the Portland area for Trillium, a for-profit CCO owned by Centene Corp., a Fortune 500 company that’s headquartered in Missouri.

“The whole idea of local buy-in and local support is an issue,” Kitzhaber said.

Trillium will compete with Health Share of Oregon, a nonprofit that includes all of the major hospital systems and behavioral health providers in Multnomah, Washington and Clackamas counties. But although the health authority approved a contract and even tweaked rules to try to force providers to negotiate with Trillium, the company has not lured a single hospital system into its network of providers. Without that, it can’t serve Medicaid members, who Kitzhaber said have been ill-served by the health authority's handling of Trillium's contract in the Portland area.

“The first weekend of this month letters went out from the health authority telling members of Health Share that they’d be reassigned to Trillium, which didn’t have a contract at the time and by the way is suing three Portland hospitals,” Kitzhaber said.  “So now we’re going to have to send letters out to all those people (saying) ‘Oh by the way you are not going to Trillium.’ But six months from now you might get a card saying you are.”

He said the flip-flopping makes no sense.

That line resonated in the room, with people breaking out in applause.

The former governor is also worried about new regulations approved by the Legislature that increase reporting and other requirements for coordinated care organizations. House Bill 2267 requires coordinated care organizations to assess the health of their members by working with public health officials and local hospitals. Senate Bill 134 covers behavioral health, a new priority for Gov. Brown. It directs the health authority to come up with rules on how CCOs should approach behavioral health care. And Senate Bill 1041 gives the Oregon Health Authority authority to regulate CCOs as if they were commercial insurance companies, for example, by putting them into receivership if their finances fall apart.

All three bills go into effect in January.

“I don't think anybody objects to more accountability and more transparency,” he said. “We have to have that. But we’ve moved from 60 administrative rules and regs to about 200 and 12 new categories of civil penalties at the same time. My question is: What is the problem that we’re trying to address?”

He said the state needs to first set its sights on the end goal.

Kitzhaber was also critical of the drive by Democratic presidential candidates towards Medicare-for-all. He said he favors universal coverage but pointed out that it’s not the end-all for a healthy community. Other factors like healthy pregnancies, good housing, balanced meals, stable family life, education and a good job play a bigger role on health than providers and pills, he said.

“This whole debate is about coverage. It’s about Medicare. It’s not about health and communities and dealing with the enormous opportunity that we have and the fact that we’re leaving our children with an enormous, staggering burden of debt because we didn’t have the courage to invest in our future,” he said. “We just kept investing in a system that’s unraveling.”

Kitzhaber said he doesn’t think much will change nationally on health care in the near term. But he said Oregon could be an example for future change.

“One of the reasons I feel so strongly about the Oregon coordinated care effort is that it is an effort that’s actually trying to address cost,” he said. “If that falls apart, it removes  one of the few working models working in this nation that our Congress could look at and say actually it is possible to do that.”

Nov 14 2019
News source:
The Lund Report
Keywords:
john kitzhaber, State of Reform, medicaid, oregon health authority, coordinate care organizaitons, cco 2.0
×
This article is for premium subscribers. If you are one, please sign in below.
You can see two more premium stories for free. To subscribe, click here. We depend on premium subscriptions to survive, and they are tax deductible.
Sign InGo Premium Not now