A First for PeaceHealth Sacred Heart Hospitalists: Some Good News

In bizarre twist, PeaceHealth Medical Group comes back to the negotiating table, announces new hires and changes to management of the physicians, who say they are severely understaffed, overworked, and frustrated.
By:
Christopher Heun 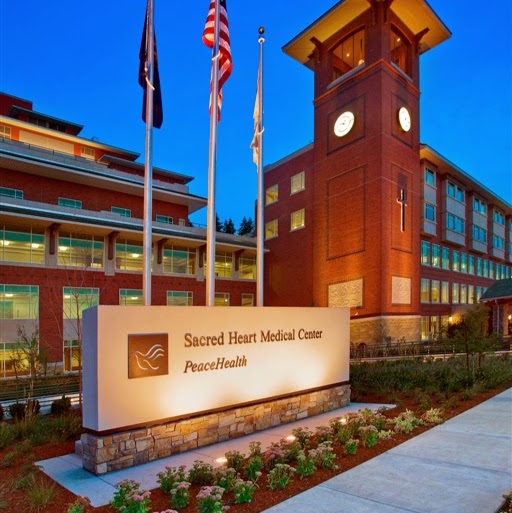 After nearly a year of conflict between hospitalists and the administration at PeaceHealth Sacred Heart Medical Center, which physicians there believe has led to unsafe conditions that endangered patient lives, the administration announced a new management structure last week, along with an intention to hire more staff.

For the first time within PeaceHealth Medical Group, a not-for-profit Catholic health system that operates 10 medical centers in Alaska, Washington and Oregon, an administrator will supervise physicians, rather than a medical director based outside of the facility.

Rand O’Leary, the chief administrative officer of PeaceHealth Sacred Heart Medical Center, will now oversee the hospitalists, who manage patients admitted to the hospital. He met with a group of them last Thursday in an attempt to mend relations that were fractured in April 2014, when PeaceHealth announced it would solicit bids to outsource hospitalist services at its two locations in Springfield and Eugene.

“That was the beginning of 11 months of unbelievable turmoil here,” said Dr. Richard Barnhart, a hospitalist at Sacred Heart Medical Center RiverBend in Springfield.

Since last April, nearly half of the hospitalist staff has resigned, PeaceHealth began and then dropped negotiations with a hospitalist provider that paid a $14.5 million settlement in 2013 for overbilling Medicare, and the hospitalists at RiverBend took the extraordinary step to form their own union, becoming the first group of physicians in the country to ever do so.

Just last month, the hospitalists department, known as PeaceHealth Hospital Medicine, wrote in a letter addressed to medical staff leadership at PeaceHealth Sacred Heart Medical Center that “meddling” into their services by John Hill, chief executive officer of the PeaceHealth Oregon West Network, had led to a staffing crisis and an “increasingly hostile work environment.”

“This mismanagement has not only burdened the specialist medical staff, but it has also led to unsafe practice conditions that endanger patient lives,” stated the letter, written by Dr. Edgar Arturo Salazar-Quiros, a hospitalist at RiverBend.

At the same time the hospitalist staff was declining, the number of patients increased dramatically. Salazar-Quiros and his colleagues are frustrated that the administration knew in advance of a staffing crisis, with 15 physicians giving notice of their resignation by the winter, but did little to prepare for it.

“They made no attempt to hire replacement physicians and they had only a handful of last minute locums [tenens] come in to fill in gaps in the schedule,” Dr. Brittany Ellison, hospitalist at RiverBend, told The Lund Report, referring to temporary hires. “Our census skyrocketed because it was flu season and we had only half the work force to deal with it.”

Since December, hospitalists have seen between 17 and 21 patients per day at RiverBend, according to Barnhart. About a month ago, the group decided that it would establish a patient load of 18 as its threshold of safety, and any more would be unsafe.

“Eighteen is more than we think is good, but as of now we will take it,” he said.

That exceeds what is generally considered to be safe practice. In a 2010 survey of 890 hospitalists published in the Journal of American Medical Association, physicians reported that they could safely see 15 patients per shift.

Not only is the total number of patients increasing at PeaceHealth Sacred Heart Medical Center, but they are also more difficult to treat.

Occupancy rates have risen above 90% in recent months, with the hospital often going into "divert status,” Salazar-Quiros wrote in his letter last month. He added that the case mix index, or average complexity of patient cases, for PeaceHealth Hospital Medicine rivals that of Oregon Health & Science University Hospital.

“PeaceHealth Hospital Medicine physicians are now below national values for compensation, lack meaningful administrative support, and are far above industry standards for encounters per day, which a regional market analysis will confirm,” Salazar-Quiros wrote.

On top of that, Sacred Heart Medical Center has no electronic medical record system. Physicians carry their hand-written orders from patient rooms to ward clerks.

“There is an inordinate amount of waste in the inefficient processes in place at Sacred Heart Medical Center. This wasted time adds up and detracts from the time we have for each patient,” Ellison said.

In a statement following the meeting Thursday, O’Leary said that “permanent new leadership, including a medical director and an administrative leader, will be chosen to oversee the clinical and management needs of the hospitalists.”

O’Leary said in his statement that PeaceHealth will conduct a national recruiting effort to attract additional permanent hospitalist physicians. “We are committing all resources at our disposal, both at the network and at the system level, to ensure that we recruit the best and brightest from all parts of the country to join our program,” he said.

O’Leary was not available for additional comment. A PeaceHealth spokeswoman declined to provide details on the number of hospitalists that will be hired, or explain why the company chose to break off negotiations with Sound Inpatient Physicians Inc. The Tacoma-based company paid $14.5 million to settle allegations that between 2004 and 2012 it submitted to Medicare and other federal healthcare programs inflated claims on behalf of its hospitalist employees for higher and more expensive levels of service than were documented by hospitalists in patient medical records.

Despite their belief that PeaceHealth Hospital Medicine does not currently have a sufficient number of physicians qualified and trained to fully staff their ranks, the hospitalists say they never considered asking for an investigation by the Oregon Health Authority’s Health Care Regulation and Quality Improvement program.

They’re hopeful the working conditions will change now that O’Leary is in charge.

“This is actually what we’ve been lobbying for the whole 10 months,” said Barnhart, explaining that it’s a relief to know that the administration is finally sitting down to negotiate. “At first blush we are pleased with it.”

Another meeting between O’Leary and the hospitalists is scheduled for this week.

Chris can be reached at [email protected]

My first job out of residency was as a hospitalist and only one day did I have less than 20 patients over a 3 month period. We covered the ICU as well - 18 is definitely over what I would consider safe and manageable.