Findings about protein could open door to new class of antibiotics 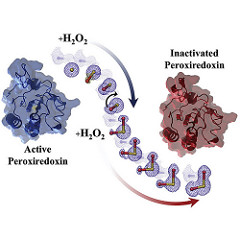 CORVALLIS, Ore. – Researchers have made the first-ever detailed, atomic-level images of a peroxiredoxin, which has revealed a peculiar characteristic of this protein and might form the foundation for a new approach to antibiotics.

Scientists at Oregon State University have used X-ray crystallography, a powerful technique that can reveal structures down to their individual atoms, to study the fundamental nature and behavior of this peroxiredoxin. Their findings were announced today in the journal Structure.

Peroxiredoxin is needed by all cells to help eliminate hydrogen peroxide, a toxin, and in normal cells this process is healthy and valuable. But peroxiredoxins inside bacteria also help provide protection from our immune cells and increase the virulence of bacterial cells that cause infections.

The researchers were able to visualize peroxiredoxin chemistry in action. They found that when it’s restrained and loses its mobility, it also loses its function. And if the normal function is lost, it can lead to cell death.

If a molecule can be found that selectively blocks the motions of peroxiredoxin only in bacterial cells – which the researchers believe may be possible – it could function as an entirely new way to kill those cells. This would leave normal cells undamaged and set the stage for new types of antibiotics.

With the increasing problem of antibiotic resistance to many existing drugs, this approach could have significant value, researchers said. It might also work in synergy with existing antibiotics to improve their efficacy, they said.

“Peroxiredoxins are found in animals, plants, and bacteria, and are proteins that are crucial for cell survival,” said Arden Perkins, the lead author on this study which was done at OSU, in collaboration with Andrew Karplus, a distinguished professor of biochemistry in the OSU College of Science.

With the extraordinary images provided by X-ray crystallography, the research also discovered that there are special regions on bacterial peroxiredoxins, different from those found in humans, that could be specifically targeted. If compounds could aim at those targets and selectively shut down the protective function of peroxiredoxin just in bacteria, it would weaken or kill those cells.

“There’s a lot of potential for this to be foundational work, something we can build on to create a new class of antibiotics,” Perkins said. “The key concept is selectively restraining the motions of peroxiredoxins in some cells, inactivating its function and leading to the death of the cells you want to kill.”

In related approaches, Perkins said, the concept may also hold some value against certain non-bacterial pathogens, like those that cause malaria or African sleeping sickness, which increasingly are difficult to treat.

This work, titled Peroxiredoxin Catalysis at Atomic Resolution, was supported by the National Science Foundation, the National Institutes of Health, and the U.S. Department of Energy. It was done in collaboration with the OSU Department of Chemistry and the Wake Forest School of Medicine.

Perkins is now a postdoctoral scholar at the University of Oregon. Karplus is a fellow of the American Association for the Advancement of Science, the world’s largest scientific society, in recognition of his contributions to protein structure determination and for improving the analysis of crystallographic data.

About the OSU College of Science:  Home to the life, statistical, physical and mathematical sciences, the College of Science is a vibrant scientific community committed to expanding the nation’s intellectual capital and preparing a scientifically literate public. The college is recognized as a national and global center for excellence in research and scholarship, teaching every OSU student and building the next generation of leaders in science.