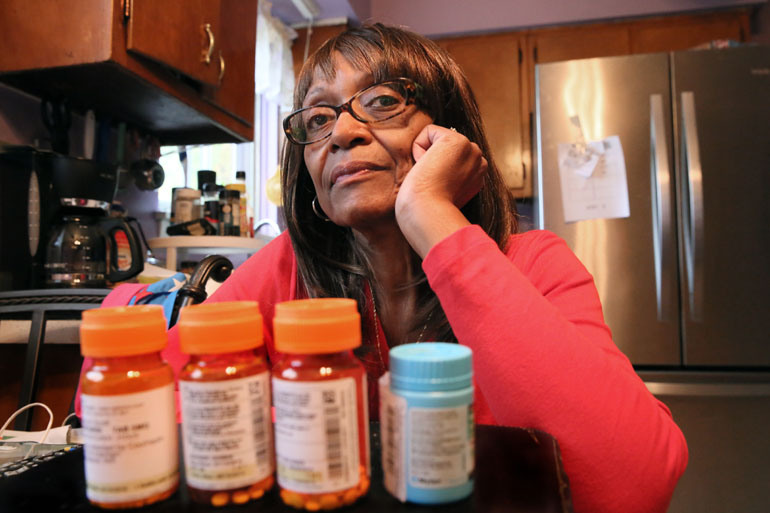 Even though health problems forced Denise Scott to retire several years ago, she feels “very blessed” because her medicine is still relatively inexpensive and a subsidy for low-income Medicare beneficiaries covers the full cost of her monthly drug plan premiums. But the subsidy is not going to stretch as far next year.

That’s because the premium for Scott’s current plan will cost more than her federal subsidy. The 64-year-old from Cleveland is among the 2 million older or disabled Americans who will have to find new coverage that accepts the subsidy as full premium payment or else pay for the shortfall. As beneficiaries explore options during the current Medicare enrollment period, there are only 227 such plans from which they can choose next year, 20 percent fewer than this year, and the lowest number since the drug benefit was added to Medicare in 2006, according to the Centers for Medicare & Medicaid Services.

It was only when Scott called a counselor at the Benjamin Rose Institute on Aging on Cleveland, a social service agency helping her with Medicare questions, that she learned she would have to pay the difference between the subsidy and new higher premium. So she switched to a different plan that will be premium-free.

“I would’ve gotten into something I really can’t afford,” Scott said. Because she has a limited income, she said any new expenses “can end up putting a strain on my budget.”

Eight million people in traditional Medicare have drug plan subsidies, also called “Extra Help.” To qualify for the full subsidy, an individual must have an income below $17,655 in 2015 and less than $13,640 in assets.

Even beneficiaries with drug plans that will continue to be premium-free next year may still want to switch, said Christina Dimas-Kahn, program manager for Self-Help for the Elderly in San Mateo, Calif., which is part of the California Department of Aging’s Health Insurance Counseling and Advocacy Program.  Like anyone else shopping for Medicare drug coverage, they should make sure the new plan covers their medicine and check whether there are restrictions that can make it more difficult to get the drugs their doctors prescribed. They also should confirm what pharmacies are in the plan’s network.

There used to be a dozen or more premium-free plans in most states in the early years of the program, said Juliette Cubanski, associate director for the Program on Medicare policy at the Kaiser Family Foundation. (KHN is an editorially independent project of the foundation.) But after insurance market consolidation and federal rules discouraging duplicative options, the number of drug plans has fallen, she said. In 2016, 22 states will have six or fewer premium-free plans, according to a KFF study released last month.  Florida will have just three.

The subsidy is recalculated annually using the average of premiums for standard drug plans in a particular region.

Health insurers “strongly support proposals to ensure low-income beneficiaries remain in their plans without facing additional costs,” said Clare Krusing, a spokeswoman for the America’s Health Insurance Plans, a trade association. “However, the soaring price of prescription medications has resulted in an unprecedented increase” in health insurance costs, which have led “to higher premiums in many plans,” she said.

Enrollment ends Dec. 7 for 2016 drug plans and Medicare Advantage, the private insurance policies that are an alternative to traditional Medicare. After Jan. 1, most plan subscribers are locked into their plans for a year. But there’s an exception for subsidy beneficiaries.

Semanthie Brooks, Benjamin Rose’s director of community advocacy, said some people with low-income premium subsidies don’t know they can switch plans anytime, and “believe they are stuck paying a higher cost.” And then there are others who are afraid to take a chance with a new insurance company even if they can’t afford the added expense.

“They will pay more for peace of mind and give up something else.”