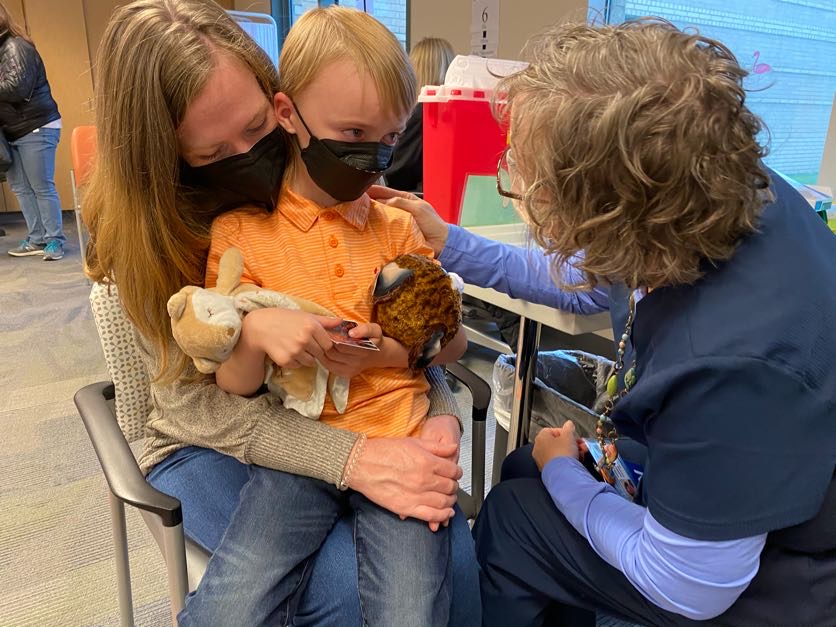 A provider consults with a boy and his mother at its Vancouver location./Karen Vitt, Kaiser Permanente/Oregon Capital Chronicle

WASHINGTON — Parents of children under 5 are one step closer to vaccinating their young kids against Covid-19 after the U.S. Food and Drug Administration’s outside vaccine panel recommended emergency use authorizations of two Covid-19 vaccines Wednesday.

The 21-person Vaccines and Related Biological Products Advisory Committee voted unanimously to recommend the FDA approve emergency use authorizations for a three-dose Pfizer vaccine and a two-dose Moderna vaccine.

If the FDA does issue its authorization later this week and the Centers for Disease Control and Prevention recommends use, shots will likely begin next week.

Dr. Peter Marks, director of the FDA office responsible for assuring the safety and effectiveness of vaccines, began the day-long meeting Wednesday citing the high number of children hospitalized during the omicron wave this winter, as well as the 442 kids younger than 4 who have died since the start of the pandemic

“We are dealing with an issue where I think we have to be careful that we don’t become numb to the number of pediatric deaths because of the overwhelming number of older deaths here. Every life is important,” Marks said. “Each child that’s lost essentially fractures a family.”

Vaccines for illnesses like the flu, Marks said, are something parents have accepted in the past to try to prevent their children from dying.

“Here we have a different pathogen, but one that has created a lot of havoc just the same,” Marks continued.

The Moderna vaccine, about a quarter of the dose of the adult vaccine, would be administered in two shots, with the second given a month after the first.

Side effects for children between 6 months through 36 months of age include fever, irritability, crying, sleepiness and loss of appetite. Study participants between the ages of 37 months and 5 experienced fever, headache, fatigue, muscle aches, joint stiffness, nausea/vomiting and chills.

Four children between 16 and 19 months experienced febrile seizures following the vaccine, with two of those happening within 10 days, one 21 days later and one 66 days after vaccination. Three of the seizures were deemed not related to the vaccine by investigators.

The Pfizer vaccine dose is about one-tenth the adult vaccine. The second dose is given three weeks after the first, with the third dose coming at least two months later.

Study participants had some redness, tenderness and swelling at the injection site for both vaccines.

Moderna filed for emergency use authorization for its two-dose vaccine for children between six months old and 6 years old on April 28.

The company said in a statement the vaccine was 51% effective for kids between 6 months and 2 years old and 37% effective for children between 2 and 6.

Pfizer announced its request for an EUA for a three-dose Covid-19 vaccine on May 23, saying in a statement that the specialty vaccine was 80.3% effective in children 6 months to 5 years.

That number, however, is based on just 10 symptomatic Covid-19 cases and the FDA advisory panel members expressed concern Wednesday that might not be the level of protection when the Pfizer vaccine is given to a much larger number of children.

“We have to be aware of the fact that we care tremendously at FDA about the safety and effectiveness of these vaccines, and we will continue to monitor these vaccines as they are deployed,” Marks said.

Any evidence of additional side effects from the two Covid-19 vaccines for young kids would be quickly released, Marks noted.

Shots by next week?

White House Covid-19 Response Coordinator Ashish Jha said earlier this month that the federal government would begin shipping doses of the vaccine formulated for young kids as soon as the FDA authorized one, or both, of the vaccines.

While doses cannot be administered until after the CDC recommends emergency use, Jha said, he expected shots could begin next week.

“We have asked states to distribute the initial tranche of doses to their highest priority sites, including those serving the highest-risk children and hardest-to-reach areas,” Jha said at the time. “We’ve also asked them to prioritize sites that can handle large volumes, such as children’s hospitals.”

While Jha said, it would take “some time to ramp up the program and for vaccinations to be more widely available,” he also said “that within weeks every parent who wants their child to get vaccinated will be able to get an appointment.”

The federal government has enough funding to distribute free vaccines for kids under 5 despite the Biden administration issuing dire warnings about the fate of testing, treatment and vaccines amid a funding stalemate with Congress.

It’s not clear, however, how many parents will get their young children vaccinated with either the Pfizer or Moderna vaccine.

Thirty percent of kids in the 5 to 11 age group that became eligible for Covid-19 vaccines in October were fully vaccinated as of June 1, according to the CDC.

Those numbers have increased steadily during the last six months, rising from 3.8% in the beginning of December to 23% in early February to 28% on April 1.

A Kaiser Family Foundation poll conducted in April showed that about 18% of parents plan to get their children under 5 vaccinated right away while 38% of parents said they would wait and see.

Another 11% said they would only get their young children vaccinated if it was required and 27% said they definitely wouldn’t get them vaccinated.

Jha said during a separate press conference this month that the Biden administration doesn’t have any “internal targets” of how many young children should be vaccinated after a week or a month or three months.

“A reminder that these things take time, that vaccine confidence builds over time,” he said. “It builds with trusted voices, physicians, faith leaders, others helping people get vaccinated. This is not a one-and-done, this is not an automatic.”