Many contractors who provide farm labor and must now offer workers health insurance are complaining loudly about the cost, while others worry about immigration risks that may arise
By:
April Dembosky, KQED 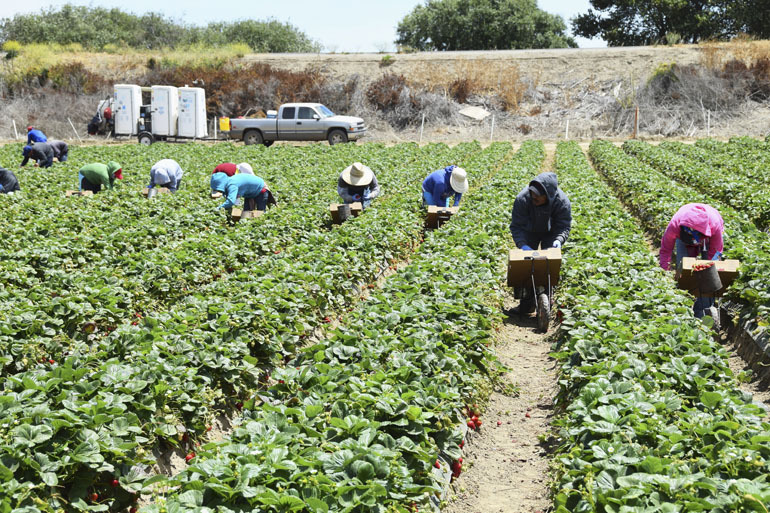 Obamacare is putting the agricultural industry in a tizzy.

Many contractors who provide farm labor and must now offer workers health insurance are complaining loudly about the cost in their already low-margin business.

Some are also concerned that the forms they must file with the federal government under the Affordable Care Act will bring immigration problems to the fore. About half of the farm labor workforce in the U.S. is undocumented.

“There’s definitely going to be some repercussions to it,” said Jesse Sandoval, a farm labor contractor based in Stockton, California. “I think there’s going to be some things that cannot be ignored.”

Sandoval came to an educational conference for farm labor contractors — essentially staffing agencies for field workers — held at the San Joaquin County Agricultural Center in Stockton in the fall. Men with broad shoulders, wearing denim jackets and cowboy hats, sat in the audience, listening to lectures on a litany of laws and rules regulating their industry, including Obamacare’s employer mandate.

Sandoval has about 100 workers on his payroll. When farmers need a crew to pick cherries, pumpkins or asparagus, they call him to send the workers. He has to offer them insurance this year, and he’s smarting over the price tag. At $300 a month per employee, he’s looking at a $30,000 monthly bill.

Sandoval said he can’t absorb the hit. “The numbers aren’t there,” he said. “My margin is 10 percent, and I have to increase expenses 10 percent? Well, that doesn’t work.”

But for farm workers who pick oranges or peaches for $10 an hour, that’s still too much. Agostin Garcia of Fresno, California, said the two contractors he works for near Fresno offered him insurance directly. But when he saw the price tag, he turned them both down.

“For me, I’m the only one in my house who works,” he said. “There’s five of us in the family. It just wouldn’t work. Either I pay for health insurance, or I pay the rent and utilities.”

Garcia said only a fraction of his co-workers have signed up for coverage. He said when farm labor contractors hand out packets explaining the coverage, the page where workers reject it is right on top.

The cost isn’t the only thing about Obamacare stressing people out in the ag industry. Some are worried about immigration problems. Employers have to file new health care forms with the IRS for all their workers, whether or not they accept the insurance.

Attorney Kaya Bromley said this will make it harder for some contractors to turn a blind eye when workers give them fraudulent documents. “Now that there’s more transparency because of all of the reporting, I think we’re going to have a lot more data on how many illegal or undocumented workers we have,” she said.

Bromley said among the contractors for whom she consults, she has seen a range of quasi-legal and even illegal strategies to sidestep the health law.

“I have heard of employees who are choosing to opt out because they want to fly under the radar. I have also heard of employers who are urging the opt-out or at least encouraging it,” she said. “And I warn all of them that they are going to be in big trouble.”

Farm labor contractors say they’re stuck in a Catch-22. Technically, immigrants who are in the U.S. illegally aren’t eligible for Obamacare benefits. But employers can’t admit that any of their employees may be working illegally, so they have to offer the insurance or face stiff fines from the IRS, maybe even a discrimination claim.

“It’s huge. And no one’s talking about the enormity of it,” Bromley said. “When it plays out, and the penalties start getting assessed, that’s when people will start having religion about it.”

Golinda Vela Chavez helps run a contracting company in Salinas, California. For her, talk of Obamacare mainly brings up frustration with the country’s complicated immigration system. She said the U.S. doesn’t enforce the borders, but then doesn’t let people work. “And suddenly the employer is evil,” she said.

Contractors wonder how they’re supposed to comply with the health care law when there’s still so much contradiction in the immigration system. “Our government, all they do is talk about it, they don’t fix anything, they make everything worse,” said Chavez.

The Affordable Care Act is a cookie cutter, she said, and the complexities of the farming industry just don’t fit.

This story is part of a partnership that includes KQED, NPR and Kaiser Health News.