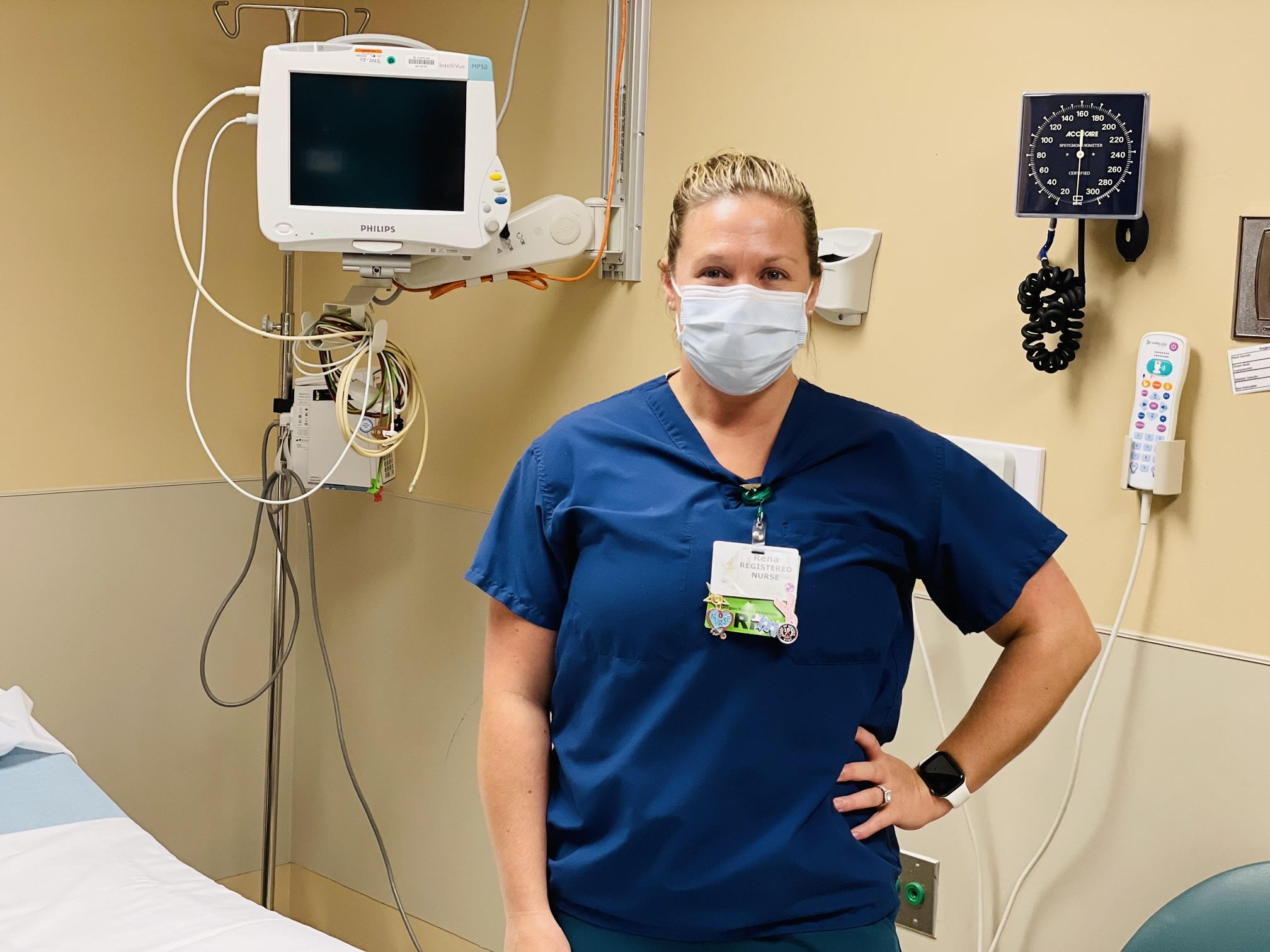 Rena Langlitz is a registered nurse in the emergency department of Willamette Valley Medical Center in McMinnville.

Rena Langlitz used to love her job as an emergency department nurse at Willamette Valley Medical Center in McMinnville.

She appreciated her colleagues, relished the snap-to pace in the ER and enjoyed helping patients heal.

“Nursing is such a rewarding career,” Langlitz told The Lund Report. “And being a nurse in the ER —  it’s a joy.”

She started working at Willamette Valley in 2003. After four years as a certified nursing assistant she became a registered nurse there after earning an associates degree and then a bachelor of science in nursing. She hasn’t wanted to do anything else, but in recent years, she said, her work has become increasingly stressful because of staffing shortages.

“We’ve had a humongous amount of turnover,” said Langlitz, who's 37.

Willamette Valley Medical Center, a 60-bed for-profit hospital, is not alone in having to scramble these days for staff. Hospitals across the state and country are facing an epic staffing shortage as exhausted health care workers head for the door, stay home to care for children or call in sick because they, too, have become infected with COVID-19. Hospitals report difficulty finding temporary staff to plug holes in schedules because staffing agencies are stretched thin, and there are not enough new graduates to replace staff that leave.

But as the pandemic rages on, the demand for beds has not lessened, causing backups in emergency departments where mental health and other patients end up being “boarded” sometimes for days because there is nowhere else for them to go.

All these factors make her job difficult, Langlitz said.

“It’s hard going to work now because you don’t know what is going to be thrown at you,” Langlitz said.

She said she runs among patients to get the work done, including taking vitals, distributing medication, drawing blood for lab analysis and managing intravenous drips for critically ill patients. Because there’s so much work, medications are not always dispensed on time and lab draws might be delayed, she said. She’s never had to skip a task, but she said the staffing shortages degrade  patient care.

“It's poor patient care,” Langlitz said. “We need more ancillary staff. We need more bodies on the floor to answer calls in a timely manner, to be able to help facilitate labs when we know that they're not going to (happen) in time. We need support from our managers to make sure that we get a break sometimes and we're rested. And it's just not happening.”

In response to questions about staffing and other issues, the administration released a statement to The Lund Report:

"Delivering high-quality, safe, and compassionate care for our patients is our top priority at Willamette Valley Medical Center, and we strive each day to be an excellent workplace for our employees. Like many hospitals across the country, we have experienced a surge of COVID-19 patients over the past few weeks, and we are operating at the edge of our capacity.  In fact, we have seen a 102% increase in patients who have tested positive for COVID-19 since August 15th. This reality – and the unrelenting pace, duration, and uncertainty of the pandemic – is taking a significant toll on our physicians, nurses, and other frontline workers."

The statement said the hospital is grateful to its health care workers. "Nurses are a vital part of our workforce, and we are working every day to attract, develop and retain high-performing nursing talent at our hospital," the statement said.

The hospital is part of privately held Tennessee-based LifePoint Health, which owns 89 hospitals nationwide with 42,000 employees and estimated annual revenues of $7 billion. Its financials are not public.

Willamette Valley, one of three for-profit hospitals in Oregon, has consistently ranked among the most profitable, measured by profit as a percent of revenues. In 2020, it reported an $8.9 million profit on operating revenue of $102 million, according to its filing with the Oregon Health Authority.

Amid the pressures at work, Willamette Valley nurses are also pressing for a union contract. The staff of about 175 registered nurses at the facility voted overwhelmingly to join the Oregon Nurses Association in November 2019, a year after Willamette Valley Medical Center was purchased by LifePoint.

“We organized with ONA because we saw what we believed to be a deterioration in the quality of care our patients received, and we watched our wages and benefits fall grossly behind other hospitals throughout Oregon,” Corey Mertz, a registered nurse and vice chair of the nurses bargaining unit said in a statement.

The two sides started bargaining last June and have had more than 30 sessions but have failed to reach an agreement. Wages and working conditions are major sticking points. The hospital has no official pay scale, according to the union.

“WVMC can arbitrarily decide what caregivers get paid,” said Kevin Mealy, a spokesman for the nurses association. “There is no transparency.”

He said an average of one in four nurses have left the hospital over the past four years, and that those now on staff are racking up overtime trying to cover open shifts.

The hospital currently has 34 vacancies for registered nurses, Mealy said.

The nurses association blasted the facility in a report published in March, which said that the turnover rate of nurses at Willamette Valley Medical Center rose from 19% in 2018 to 38% last year.

“These turnover rates are significantly higher than the average … turnover rate (in the western U.S.) of 14.9% and indicate that the nurse-sensitive indicators need to be addressed in order to provide a safe patient care environment for the greater McMinnville community,” the report said.

Besides higher pay, the nurses want better working conditions. They’ve cited safety as a prime concern. Nurses have filed a number of police reports over the past year for assaults and other violence on the job, Mealy said. Many of the attacks have been caused by mental health patients lashing out.

Langlitz said the hospital does not have enough security officials.

“We see a huge amount of (psychiatric) patients and they are typically in our E.R. a minimum of six hours and upwards of a week at a time, depending on what type of care they need,” Langlitz said. “These patients are getting more and more violent. We've had a lot more nurses having to file charges against patients for assaultive behavior.”

The Lund Report reviewed four police reports filed by Willamette Valley staff last year that were obtained by the union.

Langlitz said nurses also have to deal with cursing patients.

“The amount of verbal abuse that we go through is astronomical,” Langlitz said. “This is something that nurses should not have to deal with.”

As part of the negotiations, the nurses association asked Willamette Valley in 2020 for three year’s worth of internal nurse staffing complaints along with the hospital’s written procedures for who staff are supposed to report concerns. When the hospital refused, the union complained to the National Labor Relations Board. In July,

an administrative law judge for the board ruled that Willamette Valley Medical Center executives had engaged in unfair labor practices and ordered the hospital to turn over the records.

In a statement, the hospital's administration said: "We appreciate the clarity provided by the NLRB regarding the lawful and appropriate limits of disclosing confidential documents to the union."

But it's unclear whether the hospital has actually turned over the documents as ordered. The statement said the hospital is negotiating in good faith with the nurses association. "Because we are in active negotiations with the ONA, and out of respect for the confidentiality of this process, we are unable to comment further on the specific items being discussed during ongoing negotiations," the statement said.

With the bargaining dragging on, nurses plan to meet next Thursday in the parking lot of The Diner in McMinnville for a town hall meeting. The event will be part of their effort to put pressure on the hospital to reach a contract.