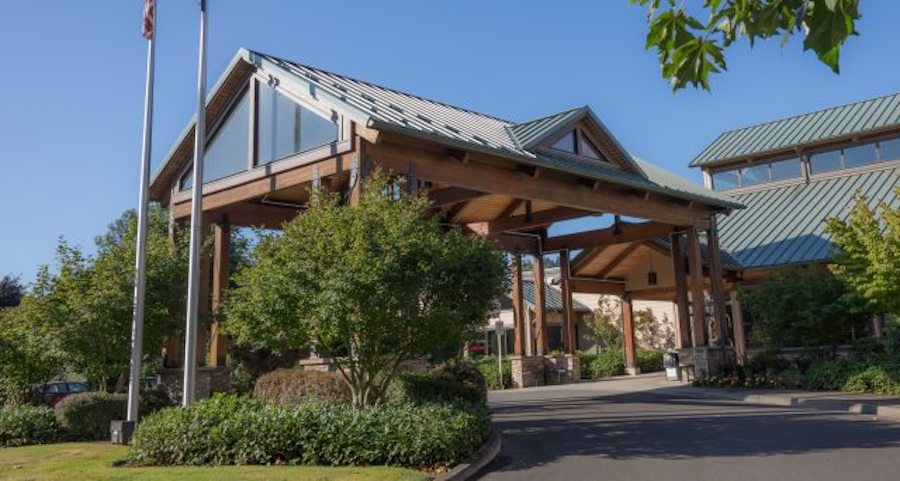 PeaceHealth faces a whistleblower complaint filed by a nursing assistant who complained about low staffing levels at Cottage Grove Medical Center, stayed home and was fired./Photo courtesy of PeaceHealth

(This article has been expanded to incorporate additional reporting.)

For eight years Clinton Petit reported to work at PeaceHealth Cottage Grove Medical Center as a certified nursing assistant. That changed after July 2020 when pandemic-era staffing levels seemed unlawfully thin, and he decided to stay home that day instead.

sued his employer in Lane County Circuit Court, saying PeaceHealth unlawfully terminated him in retaliation for his complaints of unsafe staffing levied internally and to the Oregon Health Authority.

Petit’s lawyer did not respond to emails asking for comment. PeaceHealth has not yet responded to the lawsuit in court, but a spokesperson for the Vancouver, Wash.—based health system issued a statement to The Lund Report.

“PeaceHealth does not publicly comment on pending litigation. However, providing safe, high-quality care in our communities is our highest priority, and we have policies and practices in place that encourage our caregivers to raise any safety concern, at any time. Thanks to their dedication, PeaceHealth medical centers have maintained or improved performance on internal and external reported safety measures during the past two years of the pandemic.”

The state Bureau of Labor and Industries investigated the case and concluded Petit appeared to have a valid case — or “substantial evidence” — that he was fired in retaliation for raising concerns of unlawful staffing. The bureau made that conclusion based on the health system's seeming admission that his complaints played a role in his firing.

Records obtained from the Oregon Health Authority under Oregon Public Records Law show that based on a complaint by Petit, the agency issued a citation to PeaceHealth for “repeated noncompliance” with state health care staffing law, dating back to a 2018 inspection.

Petit, in his July 13 suit, says he “performed his job exceedingly well and received positive reviews and promotions” during his first eight years at PeaceHealth. A manager's email to him sent in the fall of 2020 says that over the summer, “you were recognized for your great de-escalation skills and your polite nature,” according to bureau's file.

Petit, in his complaint to the bureau, said that PeaceHealth changed its internal staffing policies, and on July 22, 2020, he notified his supervisors that the facility's staffing levels were unlawfully low — so he would be not coming in to work.

In response, he claimed, manager subjected him to bullying, intimidation and threats made against his license. After he was written up for taking the day off, he began trying to record and document his conversations with management, records show. One manager described him as “distrustful.”

Another one, Chief Administrative Officer Alicia Beymer, emailed him in the fall of 2020 that PeaceHealth was trying to address his concerns: “Your concern regarding the lack of staffing ... on the medical unit has been escalated to me by nursing leaders on your behalf. I do want you to know we are working on developing an adequate pool of clinical caregivers to fill holes or vacant shifts or to be able to support during times of high patient acuity.”

Petit, however, observed that staffing remained low between August and October, and he continued to complain to managers. On Sept. 15 2020, he submitted a complaint about the hospital's staffing to the Oregon Health Authority, the first of two. He also complained to the Oregon State Board of Nursing before going to BOLI with claims of unlawful whistleblower retaliation. He let his management know that.

PeaceHealth responded to the BOLI complaint using the law form Schwabe, Williamson & Wyatt. In a Sept 1, 2021 letter to the bureau, attorney Thomas Payne denied that the hospital had engaged in unsafe staffing, and claimed Peacehealth fired Petit because his commmunications had become “confrontational” and made him difficult to work with, including by requesting to record what managers told him. At one point, Payne wrote, Petit struck the table with his hand during a meeting with managers. His insistence on recording a “coaching” meeting was the last straw, Payne wrote.

On March 2, 2021, the hospital put Petit on leave, and fired him three days later. The hospital's notice to Petit said “the influx of the swing bed patients” had “created new approaches to our care delivery and we recognize that this has been difficult for you.”

That line about new approaches, according to the state's conclusions about the case, was essentially an admission: “a reference to complainant’s reports of lower than permissible staffing levels” after PeaceHealth changed its staffing policies.

Under state rules, hospitals are required to have a staffing plan and set their own staffing ratios for different units and shifts, based in part on the needs of the types of patients served.

The inspection of Petit’s complaint, completed Aug. 5, 2021, found that, among other things, management at the Cottage Grove hospital had not done that, so no minimums were set for each unit, as required. Records showed that the hospital had failed to let staff have meal breaks as required, and in unit where minimum staffing was set, the outpatient infusion program, that minimum was not followed.

The Oregon Nurses Association represents only a few certified nursing assistants, but is familiar with the staffing laws that apply to them and to registered nurses

Larlene Dunsmuir, a nurse practitioner who serves as Director of Professional Services of the Oregon Nurses Association, said that Oregon’s law is weak and leaves too much power with the employer, who is often not held accountable.

That puts nurses and nursing assistants in a difficult place. Either work in a situation where standards are not being met, putting their license at risk, or face possible patient abandonment allegations — that also are a risk to their license.

“Our members face every day being in this place between a rock and a hard spot,” Dunsmuir said. “So they either acknowledge that the assignment is not safe for them to take, or they take it and risk losing their license — and if they don't take it, and then something bad happens, their license in jeopardy as well. So it's sometimes choosing between your job, your employment, and keeping your license clean.”

Jul 21 2022
News source:
The Lund Report
Keywords:
PeaceHealth, staffing ratios, nursing, nursing assitants
×
This article is for premium subscribers. If you are one, please sign in below.
You can see two more premium stories for free. To subscribe, click here. We depend on premium subscriptions to survive, and they are tax deductible.
Sign InGo Premium Not now