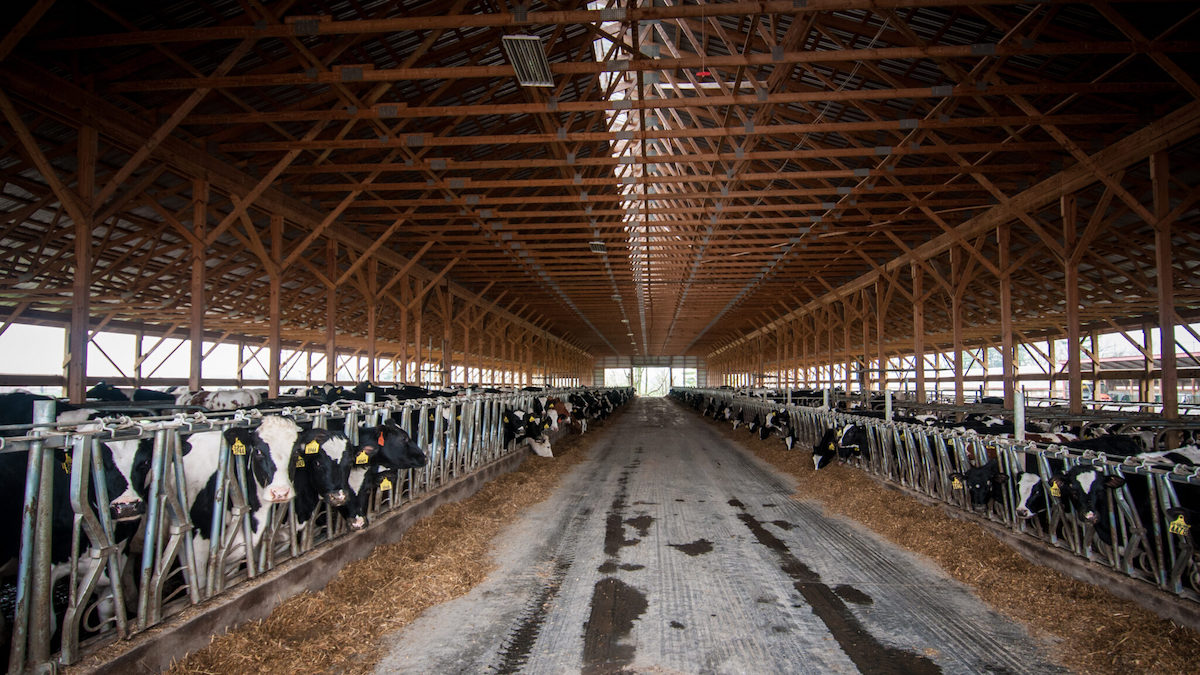 Dairies with more than 700 cows, like this one in Pennsylvania, are known as confined animal feeding operations./Lance Cheung/U.S. Department of Agriculture

This story was originally published by the Oregon Capital Chronicle.

In an Aug. 17 petition, they asked the Oregon Environmental Quality Commission to create an air-emissions program to measure and regulate air pollution from farms with 700 or more cows. Starting at that threshold, owners must obtain a state agricultural permit that regulates land and groundwater pollution from large livestock operations.

The commission, a regulation-setting board for the Department of Environmental Quality, has 90 days to respond to the petition.

This is the third time in 15 years that advocates have called for regulating dairy air emissions. The groups claim the state Agriculture Department and the Oregon Department of Environmental Quality have focused on regulating land and water pollution from large dairies, but have largely ignored air pollution. Each year, cows at large dairies produce tons of manure and urine containing ammonia gas, which is harmful to breathe and can cause burning in the eyes, nose and throat and lead to long-term respiratory issues.

Cows are also among the biggest sources of the greenhouse gas methane. In cows, it’s produced when they digest and then is expelled when they burp and defecate. Methane traps heat in the atmosphere, contributing to global warming.

Another attempt at regulation

In 2007, the state Legislature created a Dairy Air Quality Task Force made up of local and state officials, scientists from Oregon State University, public health professionals and representatives from environmental groups and the dairy industry.

They studied dairy emissions and the effects of methane, ammonia and small particles in the air from animals and manure, strongly recommending the state create a dairy air-emissions program, but legislation was never proposed.

In 2017, another attempt at regulation failed when a bill to create a permit program for dairy air pollution died in the Senate.

Emily Miller, staff attorney at the Washington D.C. based Food & Water Watch, is one of the 22 petitioners. She said the latest petition builds on the work that groups in Oregon have been doing for years.

“This was necessary in 2007, and it’s necessary now,” she said. “It’s very clear that agriculture is the number one source of methane in the state, and that livestock and manure are an increasingly large part of that.”

The number of cows in Oregon has more than tripled in the last three decades, and the number of farms with 1,000 or more cows has too. In 1997, Oregon had eight dairies with more than 1,000 cows, according to Miller. Today there are 68. One of the largest, Threemile Canyon in northeast Oregon, has 70,000 cows. In 2005, its ammonia emissions were among the highest in the nation, according to a Food and Water Watch analysis of Environmental Protection Agency data.

Threemile Canyon did not respond to a request for comment by Monday evening.

In its petition, the coalition included research showing emissions of methane, ammonia and other gasses and particulates from large dairies are detrimental to the health of people who work at large dairies and for people who live nearby.

The groups also claim that Oregon’s regulators are reneging on their duties to “use any and all discretion vested in them by law” to achieve the state’s greenhouse gas reduction targets set by the governor’s 2020 executive order on climate. Those include reducing Oregon’s greenhouse gas emissions to at least 80% below 1990 levels by 2050. By not regulating methane from large dairies, the groups say Oregon’s agriculture and environmental regulators are ignoring a major source of pollution in the state.

Regulating air quality would include mandating a number of practices, the petitioners said. They recommended new rules, including cleaning manure from cow corrals at least four times each year and keeping the depth to one foot. Typically, dairies store manure in lagoons before it’s used on fields as fertilizer. The groups want to require farmers to have vegetation or wooded buffers around them to create barriers so gasses and particles don’t spread with the wind.

Mary Anne Cooper, vice president of government and legal affairs at the Oregon Farm Bureau, which represents 6,700 farmers, said many farmers are doing the practices recommended by the petitioners.

“Many are already doing everything they can,” she said.

Cooper said the groups are using the petition to block new industrial farms in the state.

“They are using any vehicles they can, because at the end of the day they have something against so-called mega-dairies. They’re goal is to not have these dairies in the state,” she said.

Cooper said 700 cows, though a “large” farm by EPA standards, is a family-scale operation in Oregon. She said more regulations would push those farms out, while larger ones owned by corporations would not be affected.

“With new labor mandates – paid family leave, sick leave, overtime – many are barely getting by,” she said. “If a farm just invested in a state of the art liquid manure system, why would the state turn around now and tell them they can’t use it?”

Alice Morrison, director of Friends of Family Farmers, an Oregon-based nonprofit that represents about 1,200 small and mid-sized farms, said the group’s members support stricter regulations on emissions from large operations.

“I want to assure you there are thousands of farmers in Oregon who want this addressed,” she said. “We know no farmer wants to be a source of pollution in their community. It’s a hard reality to face that there are some practices that are status quo, that are emitting unsustainable levels of greenhouse gasses.”

California and Idaho have regulated emissions from the largest dairies for years, Morrison said, adding that workers and neighbors have benefitted.