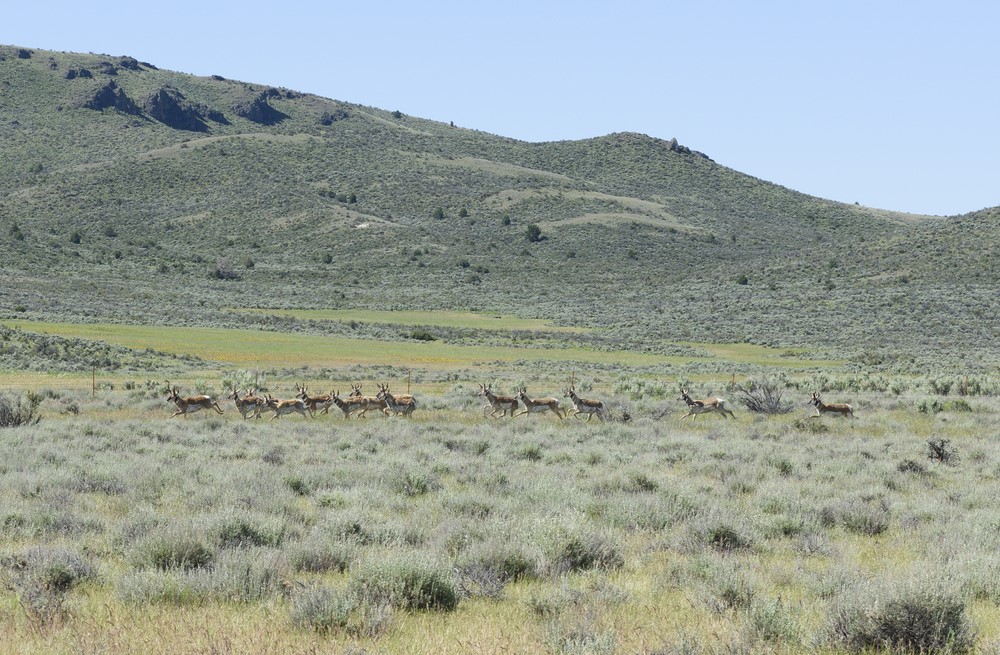 Mandates for COVID-19 vaccines for people in certain worker classes to get a shot or provide a valid exemption by Oct. 18 or lose their job are likely to cause a health-care crisis in eastern Oregon. That’s the message from several eastern Oregon board of commissioners this week, including those in Malheur and Baker, who have declared their counties in a state of emergency at their respective meetings on Sept. 22.

All six counties comprising the Eastern Oregon Association of Counties, which meet monthly, have been discussing the matter for “quite some time,” according to Malheur County Judge Dan Joyce. Currently, they are all on the same page regarding a need to halt mandates until they are more adequately prepared, he said. This includes boards of commissioners from Grant, Harney, Union and Umatilla counties.

The governing boards are urging Gov. Kate Brown to halt the mandates, stating that medical staff may be the hardest hit with staffing shortages already having been happening since the onset of the pandemic and those services have further been strained with the recent surge of COVID-19 positive patients in hospitals.

Malheur County’s declaration points out that health-care systems in neighboring Idaho also recently paused the mandates due to the entire state having entered crisis standards of care.

The declaration seeks to have Brown return the power over the matter of vaccine mandates to local officials versus having the state control them.

Treasure Valley Paramedics business manager Heather Land, echoed Joyce’s statement regarding staffing shortage, stating that the company already has experienced a staffing shortage due to COVID up to this point and that Oregon’s mandates are “definitely causing a ripple.”

Their agency, which currently employees 33 people, is already racking up tons of overtime, their biggest additional cost right now. Land says while they don’t anticipate a shutdown, they could potentially lose about four employees, furthering overtime for those who remain; however, added that most of the staff was vaccinated when they first became eligible.

The mandate is a double-edged sword for the company she said, adding that they want to protect their workers personal rights, but equally want to comply with anything that could harm licensing. As with many businesses, lawyers are handling the finer details.

Filling paramedic openings in Oregon is more difficult than Idaho, Land explained. This is because, unlike Idaho, an associate’s degree is required to be a paramedic in Oregon. Furthermore, the closest specialty school is across the state in Chemeketa. Even if a paramedic was fully trained with the needed schooling, a new hire with Treasure Valley Paramedics has to go through an intensive three-month training program, Land said.

Oregon is working on reciprocity by bringing trained paramedics from Idaho, so long as they have that associate’s degree.

One way in which the company, which is privately owned, is trying to address the situation locally is through the Legislature, Land said, adding that the hope is to get a paramedics program closer to the local area.

“But we’re still plugging along and doing our best,” Land said.'

'Are we going to feel the pinch? Of course'

While the district doesn’t provide personnel, it helps local agencies in myriad ways, including writing policies and protocols, training and working on certain personnel issues that aren’t handled individually by the agencies.

In working with those districts, Dickinson is aware there will be staffing shortages. While he doesn’t know exact numbers, he indicates that some rural or outlying areas, such as Jordan Valley, may be hardest hit. Prior to the pandemic, recruitment for those areas was already difficult, he said.

But it’s early to know the actual numbers, he said, as some people who won’t get vaccinated may get an exemption and be able to keep working.

If push comes to shove, Dickinson said he will put in a request for help from Oregon Emergency Management, but will have to carefully consider the best place to allocate resources in the 9,930 miles that comprise Malheur County.

The county has mutual aid agreements with every bordering county, Dickinson said, including as far as McDermitt, Nevada.

What has been difficult for Dickinson in the pandemic is the political divide over the vaccine.

“I study science. I have given over 2,200 shots,” he said adding that he had made the personal choice to get fully vaccinated.

However, being forced to get the vaccine is different than getting the choice to do so, and he believes the mandates will result in the loss of “good people.”

“Are we going to feel the pinch? Of course, water flows downhill … all this is a big mess,” Dickinson said.

But he aims to stay effective, adding that staffing shortages might take them slightly longer to respond to an emergency, “but we will do whatever we can to make sure people needs are taken care of.”

Dickinson says he really wishes people would understand the pandemic is real and it’s not going away anytime in the near future. He works at the clinic on Tuesdays at the fairground and said it is both “mind boggling” and “frightening” to see the amount of sick people they are testing each week.

“Young kids, babies, toddlers, adolescents, parents, grandparents — these people are sick, they are really sick, and I can’t tell you how sad it is seeing a whole family knowing they are going to have a rough go — some more than others,” he said.Regardless, he says, his passion has been and will continue to be taking care of people. This includes coordinating with Malheur County Emergency Services Coordinator Lt. Rich Harriman on ensuring all providers are getting the appropriate personal protective equipment — especially masks.'

Joyce states that the Malheur County Commissioner’s resolution follows Oregon Revised Statutes regarding governing bodies declaring an emergency exists. This allows the county to prepare for and carry out activities regarding the resolution, he said.

Does that mean the county will not see removal of people from their respective positions for not getting a vaccine or providing an exemption by the deadline?

“We would hope to allow people to continue working,” Joyce said.

He said that the requested exemption is for counties with less than 50,000 people, adding that the emergency declaration would sunset once current staffing conditions improve.

The county judge is not against the vaccine, but he worries about the unintended consequences of the mandate.

“I took the shot and will probably take the follow-up and a senior flu shot, like I did last year. I think it will really help — a double whammy, then go from there,” he said. “But I can’t ask people to go do something they don’t want to do.”

Joyce said he has heard horror stories from women who have received the vaccine, but also was hopeful that scientists will continue to work on a cure and that the government will provide money toward that.

He stated that he had heard a promising story from some local people, two of whom were immunocompromised, who were able to get monoclonal antibodies within a few hours of first getting COVID symptoms after positive tests. They reportedly told Joyce that within a couple of hours their symptoms were gone.

Those antibodies are said to mimic the immune system’s response to COVID-19 and are available to eligible, non-hospitalized patients age 12 and over who have tested positive, who are experiencing mild or moderate symptoms within the last 10 days, or who are considered high risk due to underlying factors, such as age, weight, pregnancy or other issues.

Baker County’s declaration states that its incident management team has determined that the county will be “unable to provide for pre-hospital emergency response and Saint Alphonsus Medical Center will be unable to provide basic hospital care as a result of staffing shortages” as soon as the mandate goes into effect on Oct. 18.

The newspaper reached out to Saint Alphonsus regarding the statement about its Baker location. Spokesman Mark Snider responded with a news release the evening of Sept. 23.

The release stated that the Baker City medical center has requested a print retraction from the Baker County Board of Commissioners, removing the reference to Saint Alphonsus from the county’s emergency declaration.

The news release states that referencing the hospital was inaccurate, adding that the hospital was “not notified nor asked to participate in any discernment or action as implied by the declaration.”

“We are firmly committed to continuing to serve the residents of Baker County as always, and in addressing the COVID-19 pandemic with the resources available. We want to reassure the Baker County community at large that our colleagues and medical staff stand steadfast in our commitment to provide needed health care services, and address the COVID-19 pandemic with the resources available,” said Priscilla Lynn, president and chief nursing officer for the Baker City facility. “We are extremely grateful for Governor Brown’s support and allocation of additional resources as demonstrated by the recent authorization of National Guard and contracted clinical personnel to our hospital.”

A request for comment about the declarations from Gov. Brown was returned by Charles Boyle, deputy communications director for the governor’s office.

There was no comment about whether or when Brown might address the governing boards over the emergency declarations; however, the message emphasized getting vaccinated.

“The Governor’s goal is to keep our schools, businesses, and communities open. Our hospitals are full, and our doctors, nurses, and health-care workers are being stretched beyond their limits. Hospitalizations increased nearly 1000% between July 9 and their September peak. The vast majority of Oregonians hospitalized for COVID-19 are unvaccinated. People are dying right now when we have safe, effective, and free vaccines readily available. The Governor is responding to a public health crisis,” reads Boyle’s response.

“Unvaccinated people in the workplace put themselves and everyone around them at risk for COVID-19 — and, quite frankly, COVID-19 outbreaks in workplaces across the state are happening right now and are already a disruption to the workforce. Vaccination is the key to putting this pandemic behind us.”

The Centers for Disease Control states that fully vaccinated people are also able to spread the virus to others.