The opioid crisis on the East Coast and in the Midwest has fueled a national surge in drug deaths, even as fatal overdoses have decreased or remained stable in parts of the West, new federal data show.

Deaths from opiates, cocaine and methamphetamines shot up by 35 percent in the United States between the year ending in May 2015 and that ending in May 2017, from about 49,000 to about 66,000, according to a Kaiser Health News analysis of statistics from the Centers for Disease Control and Prevention. 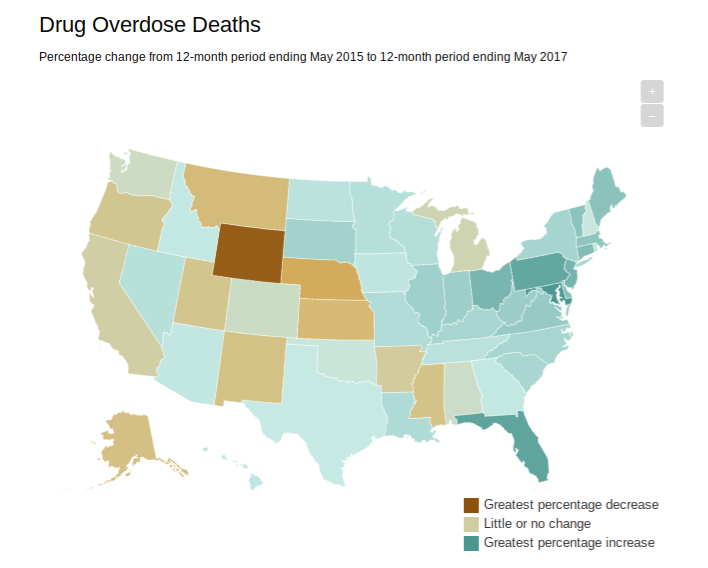 One major reason for the spike in some states, experts say, is the presence of fentanyl in the street drug supply.

Fentanyl, a synthetic opioid that is 50 to 100 times more potent than morphine, is being mixed with heroin and other street drugs in some regions of the country, sometimes without the knowledge of drug users. Even small amounts can lead to a deadly overdose.

“States that are seeing relatively little fentanyl in their supply, their overdose rates are more or less remaining flat,” said Leo Beletsky, associate professor of law and health sciences at Northeastern University.

But states that have been flooded by fentanyl are seeing overdose rates rise, he said.

Beletsky said the potent and deadly synthetic opioid has not saturated the market in California and other Western states as it has in parts of the East Coast and Midwest — at least not yet.

Lindsay LaSalle, senior staff attorney for the Drug Policy Alliance, which advocates for less criminalization of drug use, said some states with stable death rates not only have less fentanyl, but they have adopted policies to protect the health of drug users.

“California has for many decades embraced harm-reduction strategies” that may be limiting drug deaths, LaSalle said. These include needle exchanges that provide drug users with information about how to avoid overdoses, and programs that distribute the overdose reversal drug naloxone to opiate-dependent people, she said.

In Washington state, where overdose deaths increased by 5 percent, more treatment options and investments in housing and employment may have diverted people from drug abuse and avoided more deaths, she said.

Most other states rely primarily on law enforcement to control drug use, LaSalle added.

Since November 2015, 25 states have passed laws that increase penalties related to the sale and distribution of fentanyl, according to the alliance. Florida implemented a law last year that allows drug dealers to be charged with murder for selling fentanyl that causes a death.

However, the criminal justice approach “really has not shown to be effective in the long term,” Beletsky said.

The CDC cautioned that the statistics for the year ending in May 2017 are provisional and could underestimate the problem.