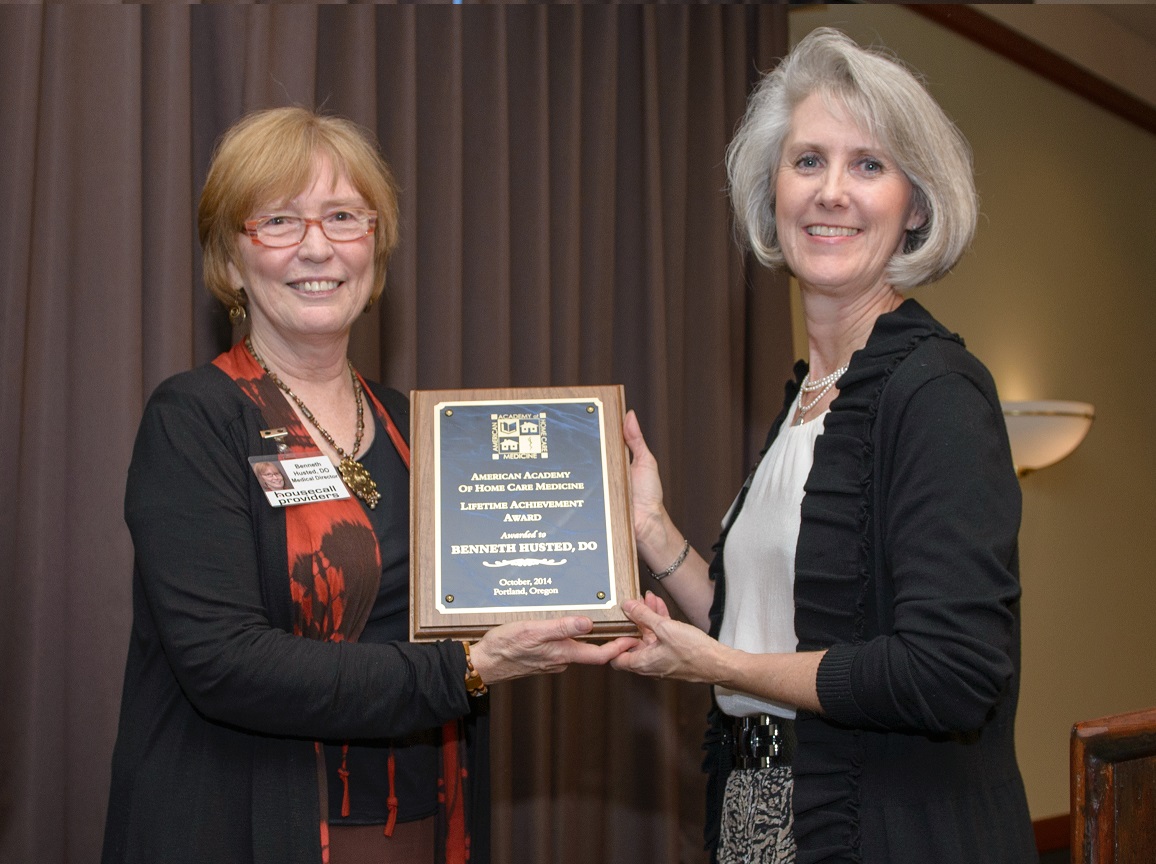 Dr. Husted, who will be retiring from Housecall Providers at the end of October, received the award via video from Dr. Tom Cornwell, President of the Academy at “One Woman’s Vision,” an event honoring Dr. Husted and her many contributions in aiding the homebound, medically fragile members of our community.

U.S. Sen. Ron Wyden (D-OR) surprised the 200+ attendees at the Multnomah Athletic Club with a personalized video message thanking the doctor for her “vision, courage and tenacity” as well as sharing his hope that “after a well-earned sabbatical, you will continue to dedicate your time as an advocate for increasing awareness of home-based medicine.”

Dr. Husted founded Housecall Providers in 1995 with a small staff and a shoestring budget. Today, under her guidance and leadership it is a $9 million organization, employing a staff of 91 and offering primary, transition and hospice care services to its nearly 1,400 patients across the metropolitan area.

“An early winner of the Academy’s House Call Physician of the Year Award, Dr. Husted always said publicly she was not a saint. But in house calls circles she certainly has inspired awe and devotion among all of us who know her work,” remarked Academy Executive Director, Constance Row.

The Academy’s Lifetime Achievement Award began in the late 1990s to honor outstanding long-time members of the Academy who had been leaders in the field. The first winner was Dr. Eric Baron, an early champion of quality and the use of electronic medical records. The second was Dr. George Taler for his ongoing leadership for the home medicine field in many areas including public policy. Dr. Husted is the third.

For members of the media with questions or seeking additional information, please contact Barb Gorman, marketing & communications specialist at 971-202-5535 or [email protected].

Housecall Providers is a Portland area nonprofit primary care medical practice and hospice dedicated to delivering, coordinating, and advocating for the quality medical care that homebound seniors and persons with disabilities need in order to experience healthful lives in their own homes.

Housecall Providers is currently involved in a three-year national demonstration project, Independence at Home. The demonstration is through the Center for Medicare and Medicaid Innovation and is testing whether primarily medical care in the home can decrease emergency department visits and hospitalizations so often seen in this fragile population.