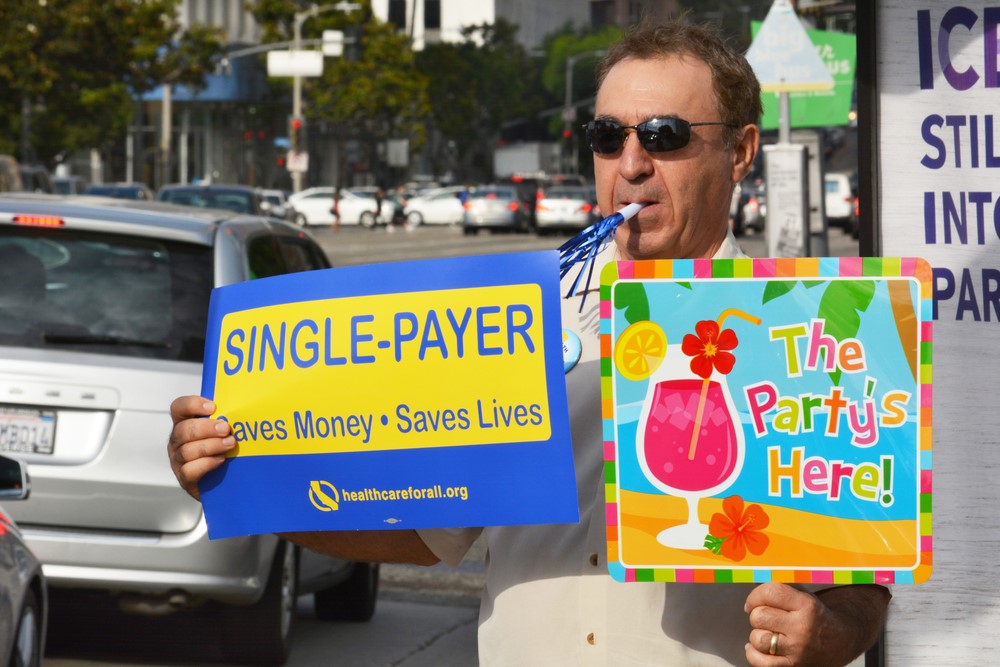 SALEM – In early April, as the Oregon legislative session neared its halfway point, residents across the state filled a hearing room to implore the Senate Committee on Health Care to pass Senate Bill 770 and pave the way for universal health care in Oregon.

The bill would establish a Universal Health Care Commission, tasked with studying a government-managed health care program for Oregon and reporting its findings over the next two years.

SB 770 has enthusiastic backers. Dozens of activists at the April hearing joined more than 100 residents from Portland to rural eastern Oregon who submitted written testimony supporting the push for a single payer system.

But while Democrats are broadly behind the bill – more than 40 of the 56 Democrats currently serving in the Oregon House and Senate have signed on as co-sponsors – not all of them are as certain about actually implementing a single payer program.

The bill is one of several this session designed to promote broad transformations of Oregon's health care system in the years to come – at the same time that the state's health authority is finalizing plans to revamp its   Medicaid coverage for roughly 1 million low-income residents through the Oregon Health Plan.

Given supermajorities in both chambers, Democrats have the numbers to pass just about any legislation over Republican opposition. Passage of a universal coverage bill would put Oregon at the forefront of health care reform efforts nationwide.

But the push for bold reform to Oregon's health care model has exposed a rift among Democratic lawmakers that few publicly acknowledge. While some argue that the time is ripe for sweeping change to the health care system, others worry a new single payer era would spell the end of the Medicaid model the state has spent hundreds of millions of dollars to build up and support.

The push for universal coverage comes amid a wave of proposals by Democrats this session to restructure how Oregon delivers health care, particularly for the 6 percent of Oregonians who still don't have health insurance coverage.

Those proposals are getting varied receptions from many of the coordinated care organizations that administer coverage under the Oregon Health Plan.

"We fully believe in the (coordinated care) model," said Mary Williams, a lobbyist for the Coalition for a Healthy Oregon, which represents seven of the 15 coordinated care organizations across the state. "We believe in the work our locally embedded community CCOs are doing. Would a large, systemic sort of change shake that foundation? Maybe."

House Bill 2447, proposed by Rep. Mitch Greenlick, D-Portland, would require the state and the coordinated care organizations that are structured as nonprofits – eight of the 15 – to collaborate on long-term vision for a future system of delivering health care in the state.

Greenlick, the longtime chair the House Committee on Health Care until he was removed this year over rude conduct, also established a Universal Access to Care Workgroup, which met last year.

That workgroup was chaired by Rep. Andrea Salinas, D-Lake Oswego, who has proposed House Bill 2012 to create a state program similar to a "Medicaid buy-in." The bill would enable lower-income Oregonians who earn too much to enroll in the Oregon Health Plan or receive federal premium subsidies through the Affordable Care Act to receive care through their regional coordinated care organization.

But the universal health care study bill has the most vocal grassroots backing, from a collection of Oregon labor unions and community advocacy organizations.

SB 770 proponents say the state can take short-term steps to improve its existing health care system and plan for a major shift to a single payer model at the same time. If passed, the bill would establish a commission of various stakeholders to study a publicly funded health care model, starting in November, making final recommendations to lawmakers at the start of the 2021 legislative session.

Implementing any of those proposals would "be quite a ways out. It's hard to estimate how far," said Charlie Swanson, legislative committee chair of Health Care for All Oregon - Action, one of the groups pushing for the bill. "But it's encouraging that (lawmakers) are taking it seriously. We think a whole lot of other countries, pretty much every other country in the world has figured it out. It seems like we know a lot of what can work. And yeah, it's going to take a bit of political courage."

SB 770 has its ardent supporters in the legislature, too. Sen. James Manning, D-Eugene, brought the bill up this session after a similar bill in 2017 failed to advance out of a Senate committee. Manning and other single payer supporters say the state urgently needs to expand coverage for financially burdened residents beyond the coordinated care model.

"We have hundreds of thousands of Oregonians that don't have medical coverage," Manning told The Lund Report. "CCOs are targeted within certain areas and certain groups of people. I'm looking at all the other folks we have in the state who don't have health coverage, bringing them in."

The bill awaits a hearing in the Joint Committee on Ways and Means because its passage would require spending roughly $700,000 in general fund money and staff resources to hold meetings, conduct research and compile data, according to a fiscal analysis.

Gov. Kate Brown plans to sign the universal health care study bill if it gets to her desk.

"She recognizes that moving in this direction would be a significant shift that would need to be examined carefully and thoughtfully," a spokeswoman for Brown said in an email.

A National Push For Single Payer

State health officials say they are amenable to major reforms, even as they finalize the awarding of contracts to coordinated care organizations that will lock them in place as the state's Medicaid providers through 2024.

Speaking about Greenlick's health care transformation bill in a recent Senate committee hearing after it passed the House last month, Oregon Health Authority Director Patrick Allen praised the lawmaker's efforts to "look around the next corner and maybe the corner after that to think about what innovating and driving the system forward looks like."

But no such health agency support was given for the universal health care bill. Instead, several Democratic lawmakers and dozens of residents from across the state gave often passionate testimony urging Oregon to lead a bold push for single payer health care.

"Isn't it time to focus on providing care instead of denying it?" Tom Sincic, president of Health Care for All Oregon, a family nurse and progressive activist, told lawmakers. "Isn't it time to bring equity into our health care system and stop forcing people to choose between food and health care? How long must Oregonians wait? Yes, it is time to face the truth, we have an emergency. Oregonians want a real fix to these problems."

At the national level, the push for single payer is enjoying its most visibility ever, championed by several 2020 Democratic presidential candidates. Congress on April 30 held its first-ever hearing on "Medicare-for-All" legislation – though it is doomed to fail with no Republican support and the Trump Administration pushing for less, not more, government involvement in the health care industry.

Still, political observers say the push to make Oregon a model for a single payer health care plan mirrors growing excitement by activists across the country, as national Democrats grapple with how much to embrace what would amount to the largest new government program in generations.

"Nationally this is taking off simply because so many Democratic primary candidates are saying, 'Hey, we've got to have this,'" said Jim Moore, a political science professor at Pacific University and longtime Oregon political analyst.

But there is a short and treacherous track record for states actually trying to implement a single payer system without federal help. A 2011 Vermont law established the country's first single payer health program. But rather than implementing massive tax increases that would have been needed to prop it up, officials shut the cash-strapped program down three years later,.

"It's expensive and hard to make happen. The nuts and bolts of it are really tough," Moore said. "And in a Legislature like this one in Oregon, where there are big pushes for cap and trade, big pushes like $2 billion in taxes for education, all that kind of stuff is where the complexity really is right now, where the brainpower and political will is. It's not with these more speculative things" like universal health care.

Still, the 2021 legislative session may go a long way in dictating the future of Oregon's health care system.

If SB 770 passes this year, lawmakers will start the next full legislative session with a laundry list of policy recommendations from the Universal Health Care Commission. Those discussions will come as state health officials start planning for the future of coordinated care organizations after the next Medicaid waiver period ends.

For Sen. Manning and other single payer proponents, the best way forward is clear.

"My best guess, my best hope is that around 2023 or 2024 we will be able to start implementing universal health care," he said.

But Rep. Salinas, who testified in favor of SB 770 last month, is less sure. She recently emphasized the importance of keeping the state's attention on efforts to reduce prescription drug costs, regulate pharmacy benefit managers and increase financial transparency requirements for hospitals and coordinated care.

"I don’t think we should be making large investments until we get a strategic plan coordinated around how we want to improve mental health, substance abuse and other issues," Salinas told The Lund Report. "We’re working toward this incrementally. I don’t think anyone will dispute, at least on the Democratic side, wanting to get to a single-payer system. I just think it’s about, how do you do it? And I don’t necessarily know if undoing the whole system, ripping off the Band-Aid, is the right way ... I think those are some of the challenges we need to meet and address before we start to move toward single payer."

But some activists have already indicated her buy-in bill amounts to just one step in their vision for the future of health care. Sincic, president of Health Care for All Oregon, made the point clear in March testimony he gave supporting Salinas' bill:

"Even after you pass this, in spite of best efforts barriers and challenges and complexities will remain," Sincic said. “We look forward to the next step, which is Senate Bill 770 … This will put Oregon on the path to what is needed, an equitable, affordable, comprehensive, publicly funded health care system for everyone. This is a system aligned with Oregon values, and that’s what we need.”

May 3 2019
News source:
The Lund Report
Keywords:
Senate Bill 770, medicare for all, universal coverage, single payer
×
This article is for premium subscribers. If you are one, please sign in below.
You can see two more premium stories for free. To subscribe, click here. We depend on premium subscriptions to survive, and they are tax deductible.
Sign InGo Premium Not now