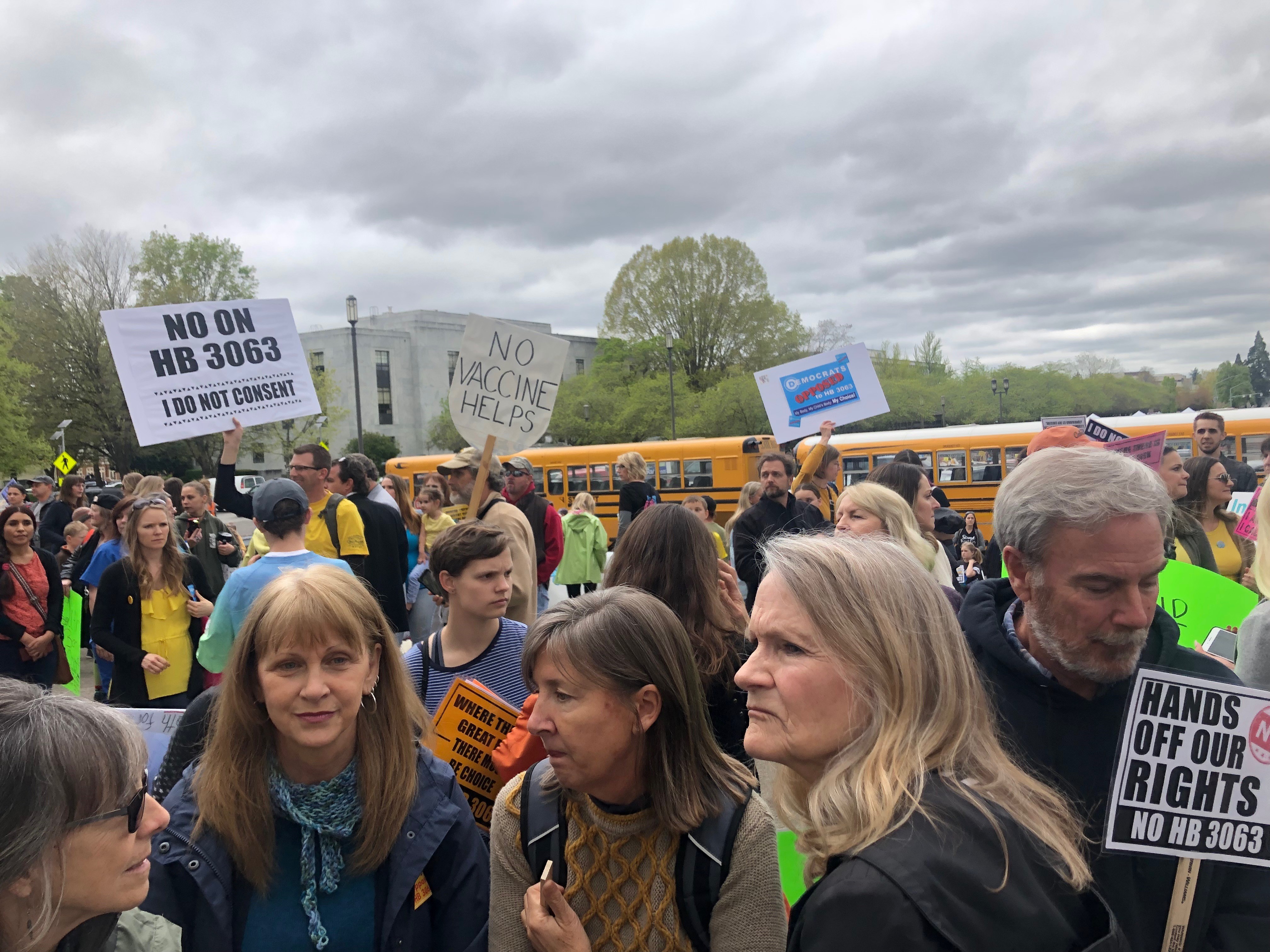 A day after hundreds of opponents of mandatory vaccinations rallied outside the Capitol, lawmakers advanced a bill that would eliminate non-medical vaccine exemptions for school-aged children.

House Bill 3063 moved out of the Ways and Means Joint Subcommittee on Human Services on Wednesday with support from the committee's five Democrats and opposition from its three Republicans – though one Democrat, committee co-chair Sen. Lee Beyer, D-Beyer, said he voted in favor of passage solely to advance the bill and would likely vote against it in a full chamber vote.

The vote moves HB 3063 to the full Joint Committee on Ways and Means. Passage there would send the bill to the full House floor for a vote, and then over to the Senate if the House passes it.

The bill would eliminate Oregon's practice of granting non-medical exemptions to parents who decline to vaccinate their children for religious or philosophical reasons. Children who aren't vaccinated and don't have a medical exemption would be barred from attending public or private schools starting in fall 2020.

About 31,000 Oregon children are not fully vaccinated according to the Centers for Disease Control and Prevention's recommended schedule, state data show. Oregon's 7.5 percent rate of kindergartens lacking one or more vaccinations due to a non-medical exemption is the highest in the country.

Bill supporters say HB 3063 is necessary to combat rising outbreaks of preventable illnesses like measles, which the CDC had declared eradicated back in 2000. Outbreaks this year have infected more than 70 Clark County children and more than 500 people in New York, most of them children. Local governments and states including Washington have recently sought to restrict non-medical exemptions.

But HB 3063 has outraged many parents who choose to alter their child's vaccination schedule or forego them entirely. Numerous speakers blasted the bill in testimony Wednesday, with some saying they would leave the state before forcing their child to receive vaccinations.

Other speakers noted the potential health risks of large unvaccinated populations on infants too young to receive vaccinations.

"Part of the reason many of us are able to be up here today to speak about this bill is because we have a longer span of life because we're free of the many childhood illnesses that vaccines (eliminated)," Nosse said. "We're on the cusp of a moment in time when people are losing faith in that, and we're in danger of losing herd immunity so people can have medical exemptions if they need them."

But the human services subcommittee's three Republicans warned of dangerous overreach by letting the state decide who should be excluded from schools.

"I believe if this bill passes the House and Senate, it is truly the death of freedom," said Sen. Dallas Heard, R-Roseburg, before turning to his Democratic colleagues. "You are not evil people. You are good people, I know you are. That's not political BS; I know how much you care about kids and how much you care about freedom. But you're wrong about this."

HB 3063 supporters, including Sen. Elizabeth Steiner Hayward, D-Beaverton, have written numerous amendments to try and ease some of the opponents' concerns. Hayward, who co-chairs the full Joint Committee Ways and Means and is a physician who failed to garner enough support to pass a similar effort in the past, outlined an amendment Wednesday that would establish a process for licensed physicians, nurse practitioners and naturopathic physicians to approve medical exemptions for vaccines. Those exemptions would be reevaluated annually.

The amendment "is in response to concerns we heard from parents with current medical exemptions who say the process is cumbersome and inconsistent," Hayward told committee members. "There are reasons to be giving medical exemptions." She noted that pediatric cancer patients are among those who are highly unlikely to receive standard immunizations.

Another amendment Steiner Hayward introduced would restrict children from attending school if they have a restricted disease that's not preventable by immunization, such as salmonella infection until a qualified medical official determines the child is no longer carrying the disease. Committee members approved both amendments as they passed HB 3063 to the full Ways and Means committee.

If HB 3063 passes with this amendment to allow naturopaths to write for exemptions, oversight will likely confirm my concerns.

I'm married to a board certified pediatrician.  Her MD degree does not equal an NP degree.  Her training was far superior.