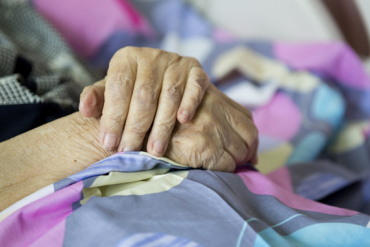 Unpaid caregivers and family members spend more than 100 hours a month, on average, assisting elderly people with dementia who live in the community and not in residential care or nursing homes, according to a new study. The time commitment was significantly higher than for similar caregivers who helped elderly people without dementia, who themselves put in an average 73 hours each month.

Overall, people with dementia make up 10 percent of noninstitutionalized adults age 65 or older, but they account for more than 40 percent of unpaid caregivers’ time.

“That overall picture of the footprint of caregiving to older adults that is attributable to dementia is the study’s most important message,” says Judith Kasper, the lead author of the study and a professor of health policy and management in the Johns Hopkins Bloomberg School of Public Health.

The study, published in the October issue of the journal Health Affairs, analyzed 2011 survey data from the National Health and Aging Trends Study and the National Study of Caregiving. It included 2,423 adults age 65 or older who were not in nursing homes who received help with routine activities, and 1,924 family members or others who provided unpaid help to them.

As people live longer, the number with dementia will increase, further straining caregiving resources. About 1 in 9 people over 65 has Alzheimer’s disease, the most common form of dementia, according to the Alzheimer’s Association. By the time they reach age 85, about one-third of people have Alzheimer’s.

Medicare generally covers home health services only if they are related to medical care. It doesn’t cover the routine personal care and other services that people with or without dementia may need on an ongoing basis.

More than 90 percent of the caregiving hours that people put in were for people in a community setting.

However, caregivers who helped someone with dementia in an assisted or independent living facility also put in significant time, 45 hours a month, on average.

Even though they provided fewer hours of care, “it’s interesting that you still found a high percentage of caregivers who were in contact with people when they were in residential facilities,” Kasper says.