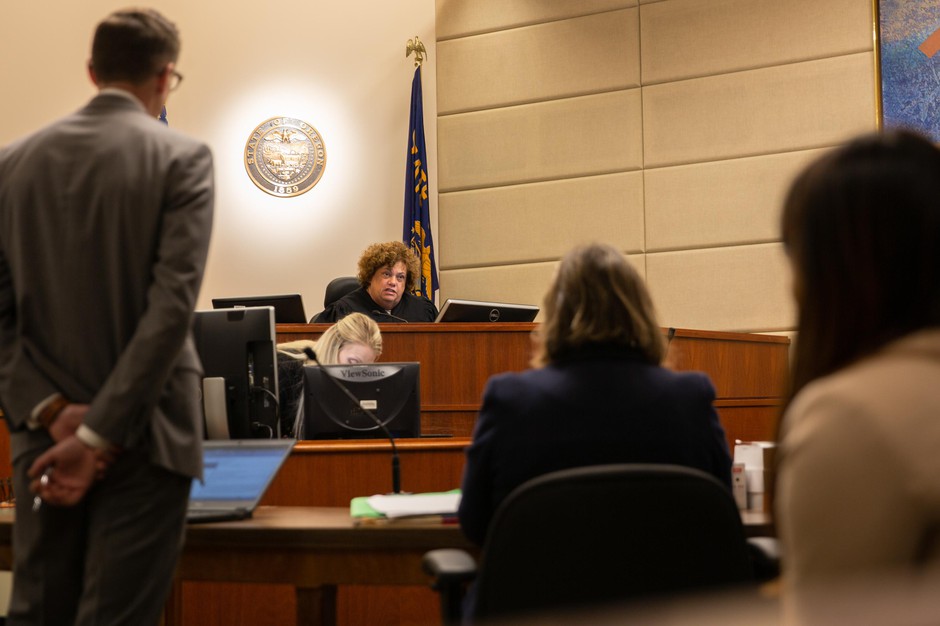 Judge Nan Waller speaks from the bench during a court hearing Tuesday, Oct. 8, 2019, at the Multnomah County Justice Center in Portland./Conrad Wilson/OPB

Court had been in session for close to an hour before Ms. Nilsen’s turn came.

She wore a white jail jumpsuit, like many of the other defendants who had already stepped into the windowless courtroom that day. A corrections officer stood directly behind her as Multnomah County Circuit Court Judge Nan Waller greeted her.

Nilsen replied, but soon her attention drifted toward the gallery, her eyes fixed on the back of the room. She spoke quietly to herself, at times opening her mouth and sticking out her tongue — all actions Waller and others noticed while deciding how to proceed.

This hearing was to determine whether Nilsen could aid in her own defense or if she needed mental health treatment before continuing with her case.

The charges against Nilsen, whose full name OPB is not using because of the sensitive nature of mental illness in the criminal justice system, included assault and harassment, both misdemeanors. According to court records, police were called to a home in Gresham where she and her elderly mother had been in a physical dispute.

Since the alleged assault, Nilsen had been in and out of jail at least five times. Sometimes for days, other times for weeks.

“I will find that Ms. Nilsen is unable to aid and assist based upon a qualifying mental health disorder,” Waller said.

A few months ago, there’s a good chance a finding like that would have sent Nilsen to the Oregon State Hospital to get her well enough to continue with her case. But the Legislature passed Senate Bill 24 in June, making it harder to send people there, especially those charged with misdemeanor crimes.

The change in the law was partly in response to a lawsuit against the Oregon State Hospital that alleged people who needed treatment weren’t getting it because there weren’t beds available at the Salem facility. Criminal defendants ordered there for mental health treatment were instead languishing in local jails, where they became sicker.

Oregon lawmakers responded with Senate Bill 24, which made it harder for judges to send people to the state hospital. While that reduced the longest waits for mental health care and ended the lawsuit, it’s left other people without the mental health treatment they need.

Under the bill, people charged with misdemeanors need to have a qualifying mental illness and be deemed dangerous in order to go to the state hospital. But some mental health professionals say considering someone dangerous is entirely subjective.

“We didn’t know if we were looking at imminent danger, danger in the next few months or lifetime dangerousness,” Guyton said. “And those are all very different questions that require different levels of assessment.”

In Nilsen’s case, she was found to have a qualifying mental illness and in need of a hospital level of care. But mental health professionals did not find her dangerous. In Multnomah County, where Nilsen lives, there aren’t services to meet someone in her situation.

“I’m going to release you,” Waller said as she ruled. “Do you have a place to stay?”

“I don’t currently,” Nilsen said. “Do you have suggestions?”

Nilsen was ultimately released to the streets.

In an interview later, Waller said the system shouldn’t work this way. There should be appropriate community-based services, she said.

“Releasing somebody who really needs in patient-level treatment is difficult,” Waller said. “If it’s not the criminal justice system, then we should have something to address the needs of people who are clearly having great difficulty.”

Reding said Senate Bill 24 has exposed how little mental health care there is in Oregon.

“It’s frustrating to not be able to help my clients the way they need help,” she said. “I’m here to offer a criminal defense. But they need a lot more help than what I can give them and our state is not providing it.”

SB 24 has left many counties suddenly required to meet the mental health treatment needs of misdemeanor defendants who previously would’ve gone to the state hospital.

Lawmakers are looking at ways to fill that gap in services. A recently passed bill puts a new tax before voters on the November 2020 ballot. It would increase taxes on tobacco products by $2 a pack. It also includes e-cigarettes, which currently are untaxed in the state. All told, state health officials said it would bring funding for the Oregon Health Plan from about $90 million every two years, to an estimated $360 million. But only a percentage of that money would go to mental and behavioral health.

Until more funding for services is in place, Oregon Health Authority Director Patrick Allen acknowledges there will continue to be gaps in the system. But he defends what the state is doing to support local mental health programs.

“I think it’s a fair question of, Are there enough? Are they in the right places? Are they the right kind?” Allen said. “We’ve been spending $30 million a biennium on community-based kinds of services for a while now. So these resources do exist in the community. And so what we’re talking about is adding to them and improving their effectiveness, not start stuff up from scratch.”

Yet those working in the community have said new services are needed.

Bill Osborne, who manages Multnomah County’s diversion courts, like the one Nilsen was in, said what’s missing is the ability to help those who need a hospital level of care, but don’t meet the new admission standards — people like Nilsen.

“It would be amazing to have something between a supportive housing model and the state hospital,” Osborne said. “It would be great to have a secure residential level of care.”

Stakeholder groups are meeting ahead of February’s legislative session with the goal to present lawmakers with ways to improve Senate Bill 24.

For now, that leaves people like Nilsen with little support. The charges in her case have been dropped.

The day after she was released from jail, she was on the street outside the Justice Center in downtown Portland, carrying her belongings and talking to herself.