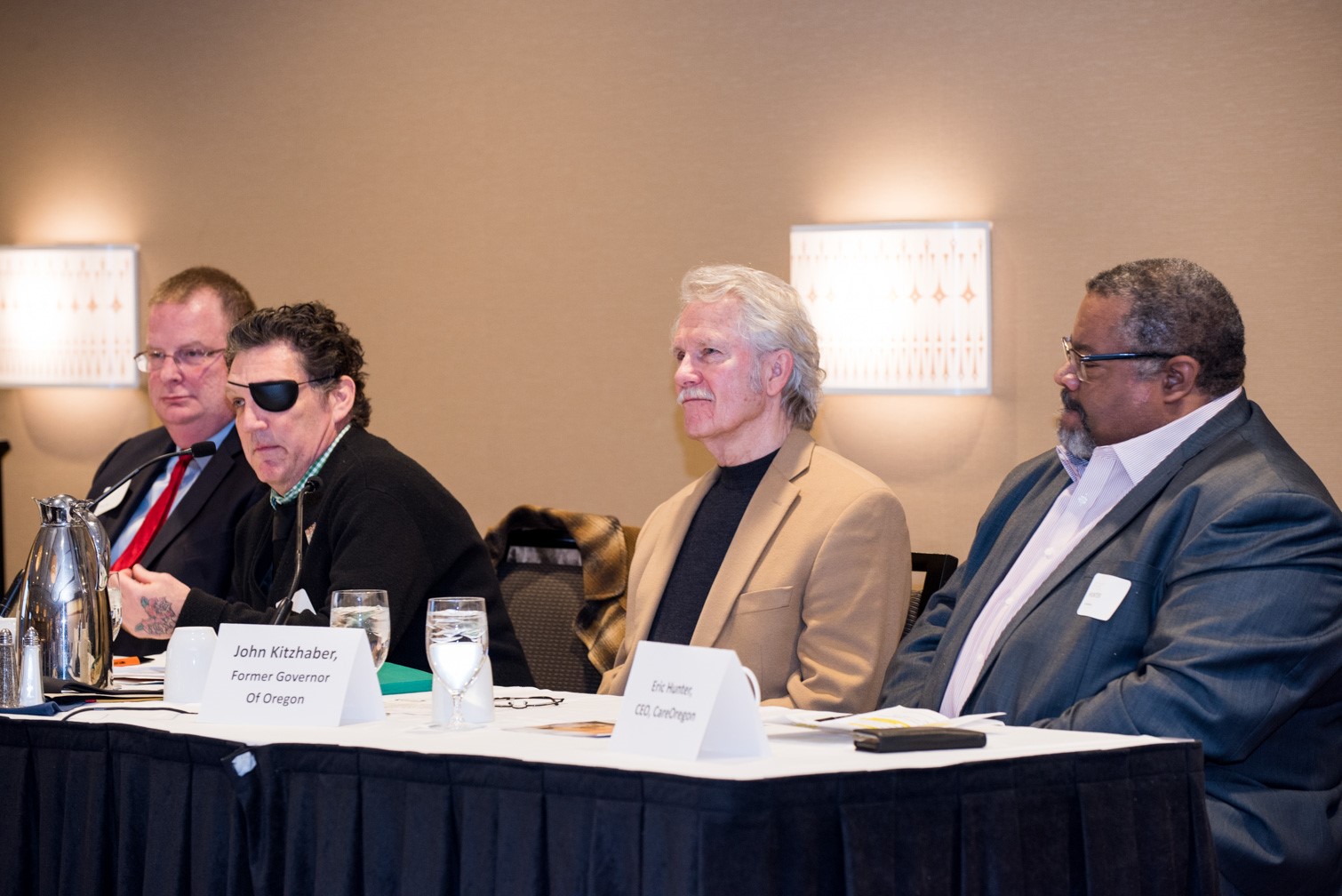 Oregon health officials are proud of the state’s Medicaid system, but critics say it’s careening towards a financial crisis that could topple a system that’s unique across the country.

Former Gov. John Kitzhaber warned the head of the Oregon Health Authority and other top health officials that the state may soon be unable to afford a health care system that a quarter of the state’s population relies on.

Costs are rising too fast, with no end in sight, he said. They could hit a breaking point in two years.

Kitzhaber was among four panelists on Wednesday at a breakfast meeting in Portland sponsored by the Oregon Health Forum, a sister organization to The Lund Report. The forum focused on the state’s reform of its Medicaid program -- an initiative known as “CCO 2.0.” The panel also included Oregon Health Authority Director Patrick Allen, CareOregon CEO Eric Hunter and Gary Cobb, co-chair of CareOregon’s community advisory board and community outreach coordinator for Central City Concern.

Panelists agreed that Oregon’s Medicaid program has made notable progress on expanding access to health care, but they said it still has a long way to go when it comes to containing costs and improving access to behavioral health care. It also has a long way to go toward moving away from a fee-for-service model and promoting collaboration among Medicaid payers to address community needs.

“We’ve got a lot at stake in the next five years,” Kitzhaber said.

Medicaid costs are the largest component of state spending and one of the main contributors to Oregon’s global budget deficit, Kitzhaber said. Oregon faces a $950 million Medicaid budget deficit that Gov. Kate Brown hopes to fill https://www.thelundreport.org/content/proposed-medicaid-tax-break-school... with a tobacco tax, hospital and insurance plan taxes, a tax on employers with employees on Medicaid and general fund dollars.

The state spent more than $3.5 billion on Medicaid in the 2017-2019 biennium, according to Oregon Health Authority spokeswoman Allyson Hagen.

The budget deficit can’t be solved, Kitzhaber said, unless Oregon changes its health payment system from one that pays per procedure to a global budget set by the state.The state would give Medicaid insurers a fixed amount of money to spend on care and to invest in social contributors to health care like housing, food and transportation.

The state currently pays its Medicaid insurers, also known as coordinated care organizations, a per-member per-month rate based in part on the amount the payers spent in previous years, how sick their populations were, how often patients seek care and on regional factors like access to providers. The Oregon Health Authority awards bonuses to Medicaid insurers who meet certain quality metrics such as cancer and mental illness screenings and it adjusts rates to award insurers who contained their costs.

Medicaid insurance officials say this method discourages them from saving money and from investing in reform. Kitzhaber said this method perpetuates a broken payment system.

“It takes what we did in the past and locks that in going forward,” Kitzhaber said.

The former governor said there should be a consequence for Medicaid insurers that don’t keep their cost growth down. He suggested that closing down an insurer that doesn’t meet its cost containment goals would be less detrimental to Medicaid patients than the Oregon Health Plan failing if the state runs out of money.

“If we go back to the old system, all of those people will be vulnerable,” Kitzhaber said.

Patrick Allen, who oversees Medicaid reform as the health authority director, agreed that spending is increasing too much and that the fee-for-service model doesn’t work. Oregon is supposed to limit cost increases to  3.4 percent a year, something many Medicaid payers are failing to meet. Even that is not ambitious enough, Allen said. Health care spending should increase no more than 2 percent, like the overall growth of the economy, he said.

Getting rid of the fee-for-service model isn’t easy, Allen said. The Centers For Medicare & Medicaid has denied two requests from the Oregon Health Authority to use global budgets instead of rates based on formulas that assess risk.

A spokeswoman for The Centers For Medicare & Medicaid did not reply to a request for comment by deadline.

“We’ve done everything we can to bend cost curve and extend the global budget,” Allen said.

Shifting to global budgets is a “political issue,” Kitzhaber said. He urged Oregon health officials to engage politicians in Washington D.C.,  just as he did when he got Oregon’s federal exemption renewed in 2012.

Kitzhaber met with officials from the Centers for Medicare & Medicaid, along with staff from the Obama administration, at the White House. Obama’s White House staff ultimately approved the proposal after federal agency officials appeared uninterested, Kitzhaber said.

That federal agency is risk-averse, Kitzhaber told The Lund Report.

“Ultimately, it’s a political call,” Kitzhaber said. “A no from CMS is not necessarily a no if you can get the administration to do this.”

CareOregon CEO Eric Hunter said that while cost savings are important, meeting community health care needs should be the priority.

If the main goal is to save money, Hunter said, Oregon might as well “invite Aetna and other (national health insurance companies) to come in and pay 80 cents on the dollar and treat people like garbage.”

Hunter said collaboration is key to providing the best health care for members. He said that’s why Health Share, CareOregon’s parent company that contracts with four health insurers and three counties, decided to apply for the state’s next Medicaid contract as one entity.

The CCO 2.0 procurement process has forced Health Share and its partners to examine how they can become more efficient in delivering care and investing in health-related community needs like housing and education, Hunter said.

“We literally had hundreds of hours of meetings to say ‘how do we reimagine Health Share?’” Hunter said.

Three of Health Share’s partners -- CareOregon, Providence Health Assurance and Kaiser Foundation Health Plan of the Northwest — had applied separately for a piece of the more than  $5 billion Medicaid procurement, but withdrew their applications.

Health Share partners thought consolidating would be in the best interest of patients and providers and in the best financial interest of the companies,  Hunter said. That way, providers wouldn’t be forced to choose plans or to “play (plans) off of each other,” and the insurers wouldn’t have to spend money on marketing, he said.

Hunter and Kitzhaber agreed that while competition can be a good thing, it’s not when it comes to caring for Oregon’s most vulnerable.

Hunter said he welcomes Trillium’s desire to contribute to the Portland health care community, but he questioned why the insurer decided to enter the Portland market as a competitor to Health Share instead of partnering with the longstanding Portland Medicaid payer.

There was wide agreement at the forum over the need to improve the state’s behavioral health care system, which ranks near the bottom nationwide.

“Discontinuity of care is a huge issue,” Allen said.

“Turns out it’s a pretty hard job to recruit for,” Allen said.

That’s something that Sharon Meieran, a Multnomah County Commissioner and emergency room doctor, disputes. She got up from the audience and told Allen that the authority’s lack of leadership on behavioral health is “not acceptable at this point.”

“There hasn’t been any leadership from the Oregon Health Authority on this for years,” she said.

She shared the story of a patient she saw while working an emergency room shift last weekend.

Meieran said the woman told her that she needed treatment, otherwise, she was afraid that she was going to walk out of the emergency room doors and die.

All Meieran could do was refer her to a list of mental health providers, many of whom have a months’ long wait.

Have a tip about health care? You can reach Jessica Floum at [email protected].