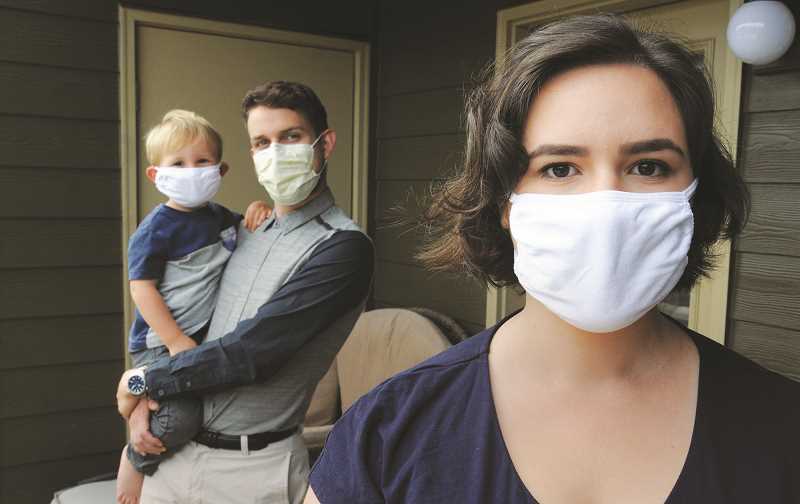 The latest coronavirus variant is sickening thousands of Oregonians a week and increasing demand for hospital beds, and the monkeypox virus has spread only to a few dozen people.

Monkeypox is not something most people should worry about, Dr. Dean Sidelinger, Oregon’s state epidemiologist, said in an online news conference on Wednesday. But COVID-19 remains a concern.

Reported cases and hospitalizations – along with wastewater sampling results – show “high levels” of transmission,” Sidelinger said. He noted that 21 counties in Oregon are considered at high risk, according to the federal Centers for Disease Control and Prevention. Only three counties – Hood River, Wheeler and Gilliam – are classified as low risk.

Sidelinger said hospitalizations for COVID-19 and other conditions – including people who had delayed care during the first two years of the pandemic – have thrown the state’s hospitals into a crisis.

“Our hospital systems are extremely stressed, and it’s not spread evenly across the state,” Sidelinger said. “But no health care system is immune from this.”

Central and southern Oregon hospitals are grappling with the highest rates of staff shortages, Sidelinger said. St. Charles Health System, with three hospitals in Bend, Madras and Prineville, recently laid off about 4% of its staff following a drop in revenue.

Last week, 458 patients with COVID were hospitalized in Oregon, Sidelinger said, noting that the demand for beds has not lessened.

Like the rest of the country, a variant named BA.5 is dominant in Oregon. Specialists say it’s the most transmissible variant yet and is effective at evading immunity either by vaccination or prior infection. People who become infected can be reinfected two weeks later, experts said.

The Western States Scientific Safety Review Workgroup – which approves COVID-19 vaccines for California, Oregon, Washington and Nevada – authorized a new vaccine for use. Made by Novavax, it uses a traditional technique based on a protein in the virus that teaches the immune system to attack it when it enters the body. Sidelinger said it showed in clinical trials before the omicron variants spread to be as highly effective at preventing severe disease and deaths as Pfizer, Moderna and Johnson & Johnson doses.

Sidelinger indicated that he doesn’t expect the vaccine, which is two doses like the Pfizer and Moderna vaccines, to dramatically increase the vaccination rate in Oregon. Currently, nearly 85% of adults have received at least one vaccine dose. A total of 77% have had two doses, and 47% have received a booster shot, health authority data show.

“While it may not have a major impact because it’s available for those who are not yet vaccinated and that’s a fairly small percentage of those in Oregon, there may be some folks who are still questioning their vaccine options,” Sidelinger said. “This option is now available for them.”

Supplies are not yet available in Oregon. Sidelinger said he expects the first shipment to arrive in about a week. Doses will be limited at first but are expected to ramp up, Sidelinger said.

Although the state has lifted most mandates, Sidelinger advised people to mask up indoors.

“All of us should wear tight-fitting masks, in particular when we may be around others in indoor settings,” Sidelinger said. “For individuals at high risk or those who care or live with someone at high risk for complications from COVID-19, wearing a mask in indoor public places offers an extra layer of protection. And wearing a mask in areas of state with higher transmission provides protection for those around you.”

Vaccines against monkeypox or hMPXV are also limited, Sidelinger said.

“The manufacturer is bringing more into the county and our federal partners are distracting it to states based on their burden of disease,” Sidelinger said.

The health authority is limiting doses to people who face a high risk of infection. They are gay men and other men who have sex with men. Transmission occurs through skin-to-skin contact or through prolonged, close exposure.

Since June 7, the health authority has counted 32 cases of monkeypox in Oregon. The state has identified 15 cases in Multnomah County, 10 in Lane County, six in Washington County and one in Clackamas County.

That number is an undercount, he said.

All of the Oregon patients are men, and most, if not all, sleep with other men, he confirmed.

He said local officials have conducted outreach to the gay community, including to bath houses and bars, to get the word out about the infection and vaccine availability. Men at risk should contact their provider and might be put on a waiting list for a vaccine, he said.

Symptoms usually start with a fever and other flu-like symptoms. Most patients develop a rash, with lesions on their face that spread to their limbs. While no patients have died and the disease has not caused high levels of hospitalization, Sidelinger said patients suffer.

He said some patients report experiencing the worst pain of their lives.

The state is trying to target the LGBTQ community to make them aware of the outbreak and urge them to protect themselves. The best protection is to abstain from sex when symptoms appear and to talk to sexual partners about the disease before having sex, experts said.

“I want to assure most Oregonians that they are not at risk for getting an hMPXV infection,” Sidelinger said. “This is not spread nearly as easily as COVID-19.”