The premium tax will cost a family of four about $460 a year, which Cover Oregon officials insist is still needed despite moving to the federal website, healthcare.gov.
By:
Christopher David Gray 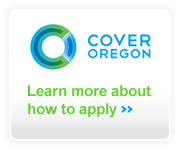 Cover Oregon’s leaders plan to keep the full assessment tax it charges health plans for its services, despite abandoning much of its operation to the federal exchange.

The health insurance exchange had charged a $9.38 fee per individual per month  -- money that was intended to let Cover Oregon run on its own when the plan was to have a stand-alone marketplace, acting director Clyde Hamstreet told legislators Wednesday.

The federal government will now be doing much of the work, but Cover Oregon will not only keep its tax, the board also voted to raise the fee to keep up with inflation, setting it at $9.66 -- a surcharge of about $460 for a family of four each year.

Hamstreet testified with Tina Edlund, who has been tasked by Gov. John Kitzhaber with managing the process of salvaging the Oracle technology for the state Medicaid program, the Oregon Health Plan.

Backed by Rep. Mitch Greenlick, D-Portland, Hamstreet and Edlund’s presentations before two legislative committees Wednesday were carefully calibrated to prepare the political landscape for the state to keep that full revenue stream.

Their remarks shifted from earlier indications that the state would simply pull the plug on Cover Oregon. On Wednesday, the state officials emphasized that Oregon will still have a state-based marketplace, with the state responsible for selecting plans, ensuring competitiveness and setting rates. To them, merely the technology -- the only part most consumers interact with -- will be federal.

“My assumption is we are going to continue the management of the exchange,” Greenlick told Conger.

“It wasn’t a plan to get rid of the management of the exchange,” confirmed Edlund.

But most of that work -- setting plan costs, is done during the Oregon Insurance Division’s rate review process, and has never been the purview of Cover Oregon. The state will also close its call center and require insurance agents who want to participate to be retrained to use the federal government’s system.

Cover Oregon will carry on working with community partners and tribal organizations as well as signing off on plans for the exchange, bringing in about $6 million to $8 million a year.

Because Cover Oregon charges a flat tax, people who purchase a cheaper plan pay a higher tax, percentage-wise, while those who pick a more expensive plan pay a smaller percentage to Cover Oregon.

Cover Oregon will still be a much leaner operation than now -- after blowing through $11 million a month while Bruce Goldberg was manning the insurance exchange -- and Cover Oregon was still paying for software it would ultimately not use. Hamstreet said he had cut costs down to about $5 million a month, and had enough to squeak through on its remaining federal grants and the premium tax for the rest of the year.

Hamstreet told the House Health Committee that Cover Oregon is projected to have just $1.9 million in the bank at the end of the year -- the equivalent of two weeks’ operations at the current rate of spending. The GOP gubernatorial candidate, Rep. Dennis Richardson, R-Central Point, expressed grave concern earlier this month about the low cash flow when speaking to The Lund Report. One more mishap, or an order that the state pay money withheld from the maligned web developer Oracle, and that money could be easily wiped out.

“That’s not very much, but that’s about the best we can do at this point,” conceded Hamstreet, whose firm, Hamstreet & Associates, specializes in putting out proverbial fires and turning around companies in peril.

The continued money stream from the premium tax won’t necessarily stay out in the field at Cover Oregon.

At an earlier hearing before the Senate Health Committee, Sen. Jeff Kruse, R-Roseburg, said he wanted Cover Oregon’s operations to eventually fold into the Oregon Health Authority, and not remain as a quasi-independent state corporation. “It was a critical mistake putting Cover Oregon out on its own. It needs to be put back into OHA where it belongs,” Kruse said.

Sen. Chip Shields, D-Portland, said it behooved Hamstreet and Edlund to have a better backup plan when open enrollment restarts on Nov. 15 for 2015 than Cover Oregon did last fall.

“We need the unvarnished truth. Feel free to give us all the bad news. In fact, we demand it,” Shields said.

Edlund replied that the federal website is already working; until the switch is made, the hybrid process will continue, said Hamstreet -- a backup plan that was not in place when Cover Oregon failed to launch last October.