Moda Health has contributed $500,000 to increase the number of medical residents in Oregon
By:
Shelby Sebens 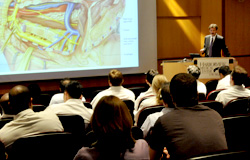 A consortium of representatives from the health industry, from physicians to hospitals to medical schools, is coming together with one purpose: increase the number of physicians in Oregon.

Known as the Oregon GME (Graduate Medical Education) Consortium, its primary goal is to help hospitals create GME programs through cost savings and assistance with complex issues such as accreditation.

“There are a lot of barriers for hospitals,” said Cathryn Cushing, executive director. “It’s not an easy fix. It’s a long game, and it takes a lot of expertise.”

Before the consortium formed, a group of health industry representatives got together to discuss how to increase the number of such programs, and, in turn, Moda Health agreed to donate a $500,000 grant, with those dollars used to hire consultants who have begun contacting hospitals.

The names of the consortium members will be made public later this month, Cushing added.

A big reason for the push for more doctors is to meet the demand of the newly insured. A recent study by the Oregon Health Authority found that Oregon needs an additional 1,700 physicians.

“Pretty much everybody agrees there’s going to be a shortage of primary care physicians in pretty much the whole country,” she said.

A 2011 report by the Association of American Medical Colleges ranked Oregon 40th in the nation for the number of primary care physicians, finding the state has 8.4 primary care residents per 100,000 residents.

The consortium, which holds its first meeting in mid-November in Roseburg, hopes to have more residents working in hospitals by 2017.

“We kind of have to wait and see how many hospitals want to be involved,” said Cushing. Federal regulations cap the number of graduate students that can be reimbursed by Medicare, which can be problematic, and there are also limitations on the size of hospitals that can offer such programs. .

Overall the goal is to keep more doctors in Oregon. Medical students who attend school ad do their residency here are 70 percent more likely to stay, Cushing said.