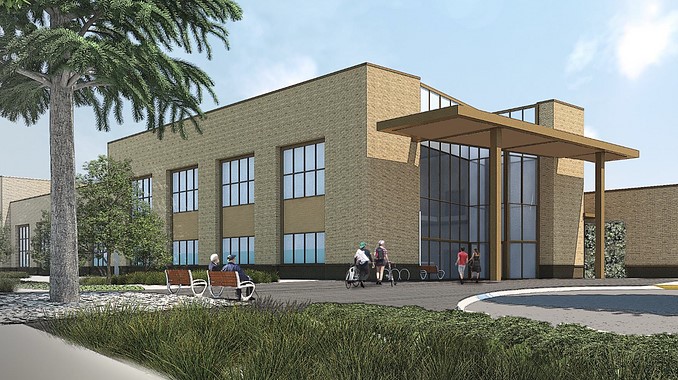 An artist's depiction of a proposed psychiatric hospital proposed for a site in Wilsonville./Universal Health Services

A psychiatric care company has withdrawn its controversial proposal to build a 100-bed psychiatric hospital in Wilsonville, following a six-year effort to win state approval for the $50 million project.

It was not immediately clear whether the company, Universal Health Services, intends to return with a new application or has permanently scrapped the concept.

The withdrawal follows a tentative state decision last October to let the project proceed, but only if the company, Pennsylvania-based Universal Health, cut it to 60 beds and promised that 45% of those beds would be reserved for mentally ill people who have been held at hospital emergency rooms or otherwise been confined, such as in jails, because they are a danger to themselves or others.

Universal Health in a statement on Monday said the state's restrictions were "untenable."

“We know that the need is great for high-quality mental health services in Oregon, and we were prepared to invest $50 million in building a brand new facility that would offer 250 full-time jobs and provide the much-needed care. However, given conditions and limitations imposed that are untenable, we made the difficult decision to withdraw from the (approval) process. We will continue to work with our community partners and remain committed to being part of the behavioral health solution in Oregon,” said Ron Escarda, Pacific Northwest group director for Universal Health.

Universal Health had applied for approval through the state's "certificate of need” process. State law requires that large new freestanding hospitals and other similar facilities go through that process to evaluate whether the project is merited.

Universal Health had proposed a 100-bed facility, with no requirement that beds be dedicated as the state proposed in its tentative decision.

Universal Health’s proposal had drawn both criticism and support. Some critics said the facility, by virtue of its location and services, would largely cater to patients on commercial health insurance while neglecting low-income patients on Medicaid. Commercial insurance is typically more lucrative for providers than Medicaid. Supporters countered that any new psychiatric beds in the metro area would be a plus.

In making the recommendation for the scaled-down hospital, Dr. Dana Selover, OHA’s manager of health care regulation, found there’s a clear need for additional psychiatric beds in the Portland area and that no general hospital in the region has proposed converting any of its inpatient beds into psychiatric units. So, the Universal Health project merits the go-ahead, Selover wrote.

But there’s only a need for 60 inpatient psychiatric beds, Selover concluded. Selover based her estimate on the size and psychiatric care needs of the tri-county area population.

Selover recommended that 45% of the new facility’s capacity be devoted to alleviating hospital emergency departments swamped by behavioral health patients and taking in involuntarily civilly committed people who are waiting for placement.

So-called “ED boarding,” the holding of mental health patients in secure emergency department rooms until space is found for them at a mental health facility, is a well-recognized problem in Oregon, Selover wrote.

The practice of holding mentally ill people in jails because there are no other facilities for them has for decades drawn human rights concerns and increasingly is sparking costly litigation for the state.

Critics said the Wilsonville site is too far away from the central metropolitan area where the need for psychiatric services is most acute and that it has poor access by public transit. They also said that what the region really needs is more supported housing for mentally ill people and more community-based outpatient help for them.

Universal Health has responded that there is still a strong need for more in-patient psychiatric beds.

Backers have been eclectic. They include Portland Public Schools, a Baptist church in Beaverton and some individual letter writers.

Universal Health has pushed the Wilsonville project for years.

The company’s previous application ended with state denial in 2017. The state said Universal Health had failed to show a need for the facility.

The company submitted a new application in 2019.

The certificate process aims to prevent construction of unnecessary major capital projects that could drive up health care expenditures in the state.

State regulations say Oregon should maximize behavioral health services “in the community where the person lives, in order to achieve maximum coordination of services and minimum disruption in the life of the person,” and that the state should “encourage and assist community general hospitals to establish psychiatric services.”

Feb 21 2022
News source:
The Lund Report
Keywords:
behavioral health, mental health, psychiatric hospital
×
This article is for premium subscribers. If you are one, please sign in below.
You can see two more premium stories for free. To subscribe, click here. We depend on premium subscriptions to survive, and they are tax deductible.
Sign InGo Premium Not now