By:
Jaelen Ogadhoh of Portland Tribune 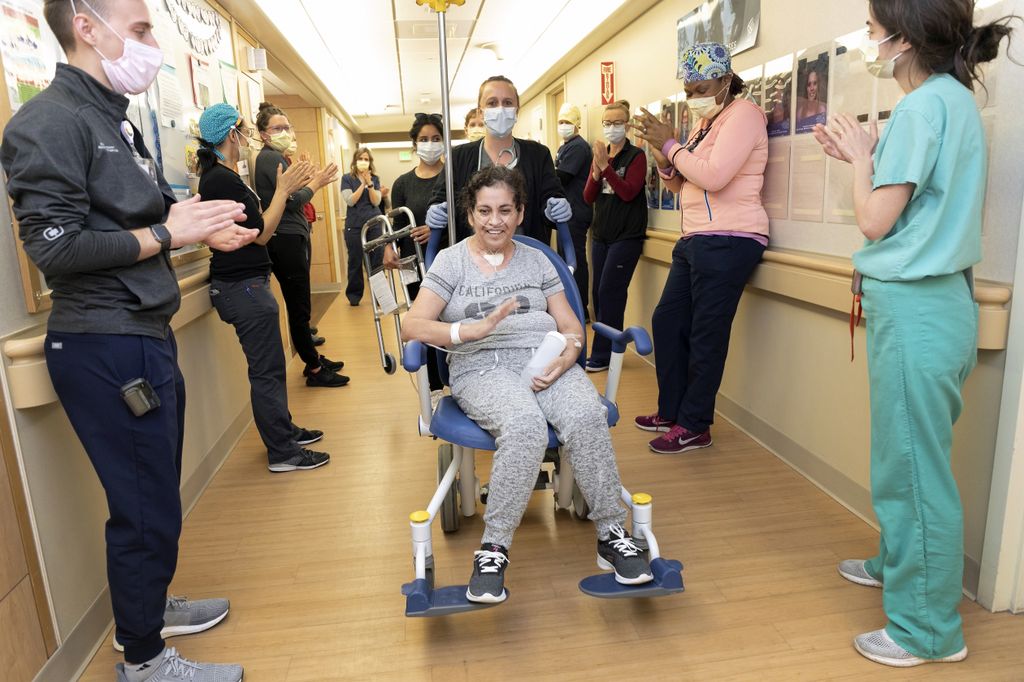 After about two months of hospitalization, Maria Nevarez, one of Oregon Health & Science University’s first patients with COVID-19 has finally been discharged, May 13, 2020. Staff lined the hallway to cheer for her as she left the hospital. (OHSU/Kristyna Wentz-Graff)

Presented with new data showing a spike in Clackamas County's COVID cases amid the rise of the delta variant, Chair Tootie Smith told residents not to panic, adding that she "predicted" residents would increasingly abandon safety precautions and gather outside in the hot summer weather.

"I predicted this was going to happen," Smith said of the spike in cases. "It's summer, people are on vacation, they're finally out having fun which had been denied for 18 months. I don't think that this is any surprise, it shouldn't have been a surprise to anybody."

Smith, who has stood adamantly against mask and vaccine mandates for the county, going so far as to encourage large Thanksgiving gatherings last November, added that she "does not see this currently as a situation where we need to panic" and the best mitigation strategy will be a "steady, contemplative and deliberate approach to continue with the measures that our public health officials have been doing."

"I almost submit if we hadn't been so restrictive we might not have seen this spike in cases, because people would have been out," Smith continued. "I suspect that the spike in cases is from social gatherings of people getting together and having fun as humans do."

Mason-Joyner, who is helping lead the county's COVID-19 response, warned the public not to take the rise in cases lightly, as the number of active outbreaks in the county has nearly doubled in the past week.

"The increase in cases is significant," Mason-Joyner said. "We went from 16 active outbreaks in workplaces and other settings last week, to now 31 active outbreaks our contact tracing team is working on today."

After the presentation, Mason-Joyner and Nibouar stuck around to answer commissioners' COVID vaccine and delta variant-related questions such as how variants are identified, the vaccine's effectiveness in treating them, how institutions such as hospitals and schools are responding, how to navigate rampant misinformation and more — echoing many of the same questions posed by residents via public hearings and social media.

Mason-Joyner reassured commissioners that COVID vaccines are "still very effective" at reducing severe illness and death even among the few "breakthrough cases" where patients have contracted the virus after getting their shots. 94 out of the 404 new cases in the county over the past week have been breakthrough cases, but none of those patients are currently hospitalized, Mason-Joyner said.

Contradicting a theory Smith had posed the week before, Mason-Joyner added that the vaccines are mRNA, meaning they "don't contain live virus," instead they "produce the instructions" for your body to produce an "army of antibodies" to fight COVID.

"Thanks to federal resources, the ability to mass produce these vaccines in a safe and effective way has happened. It's no longer an access issue, it's really around hesitancy," Mason-Joyner said.

Vaccine hesitancy is one of the things public health officials are looking to quell by continuing to engage with the public about questions and concerns they may still have, Mason-Joyner said, because the longer the virus is allowed to spread, the more mutations will have time to develop.

"As a virus continues to be in the community, more mutations will happen. These viruses are going to look for ways to continue to survive," Mason-Joyner said, reiterating that current data shows that vaccinated patients are well protected against hospitalization and death from variants.

He added, "As we move forward with more variants in the future, the concern is yes, these vaccines will not be as effective to fight those variants, because that's what it is — it's a war, the variants versus the vaccine."

Mason-Joyner was unable to answer some of the commissioners' questions right away due to rapidly emerging new findings, but promised to get back to commissioners as soon as possible. Others he answered partially, such as a question from Smith about how doctors distinguish a delta variant case from a regular case, which Mason-Joyner said doctors are able to do but wanted to consult with county Dr. Sarah Present about the technicalities of the process.

Smith responded that she does not think the delta variant is "easily identifiable" yet, and thus would be "really careful" in "talking about it as if it's going to come and just be devastating."

Mason-Joyner said health officials are continuing to provide guidance to quell public concerns about the vaccine's safety, effectiveness and longevity. As part of that effort, health experts will be available to answer questions from attendees of the Clackamas County Fair taking place Aug. 17-21.

With many residents still either hesitant or decidedly against getting their shots, commissioners and public health officials are in agreement that a priority is keeping residents as informed as possible.

Aug 4 2021
News source:
Portland Tribune
Keywords:
covid, vaccine, Tootie Smith, Clackamas County
×
This article is for premium subscribers. If you are one, please sign in below.
You can see two more premium stories for free. To subscribe, click here. We depend on premium subscriptions to survive, and they are tax deductible.
Sign InGo Premium Not now