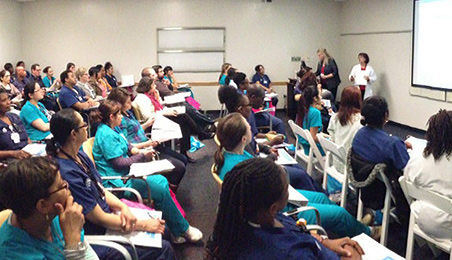 From doctorate-level nurses to unlicensed aides, workforce development in Oregon has been hampered by heavy student debt loads, burnout and the difficulty attracting diversity among its ranks.

Washington seems to have overcome some of these challenges, according to Thao Tran, government and community relations lead for SEIU 775 Benefits Group. Since 2007, his organization has trained 45,000 home-care aides with 70 hours of initial training plus 12 hours a year of continuing education.

Since then, Arizona and Alaska, have begun looking at SEIU’s model as a way to attract and retain a young and diverse home-healthcare workforce.

“The (RN) workforce picture currently is pretty rosy for Oregon,” said Paula Gubrud, associate professor and special assistant to the dean at the OHSU School of Nursing.

The Oregon Consortium for Nursing Education – OHSU and 10 community colleges – creates a pipeline for students to complete their first two years of curriculum at community colleges, get licensed and begin practicing with the option of completing their baccalaureate degrees online. Linfield College also offers such an option.

Most Oregon nursing education programs are fully enrolled, and surveys indicate more than 94 percent of 2014 graduates were employed, Gubrud said. But in the next three to five years, a significant portion of the aging nurse educator workforce will retire. “A few programs have already reduced enrollments because of the lack of faculty,” Gubrud said.

Nurses with Master’s and Doctorate degrees are not replacing retirees because teaching pays less than clinical settings, and most nursing students face daunting student loans.

Healthcare benefits are among the barriers facing those interested in advancing their careers and returning to school, Gruburd said. Some grants are available to help CNAs and housekeepers working in hospital settings to become nurses.

Dr. David Pollack, chair of the Oregon Health Care Workforce Committee, told the forum that his committee has sought to “anticipate where health reform is leading us” – such as the shift to more ambulatory and less hospital-based care, more patient-centered care and less fee-for-service care.

And, those who benefit from better-trained nurses – such as the large hospital systems that employ them – might be in a position to help their existing staff “move up the ladder.”