The center was made possible because of a $8.95 million federal grant and initially will serve 600 homeless people
By:
Corey Paul 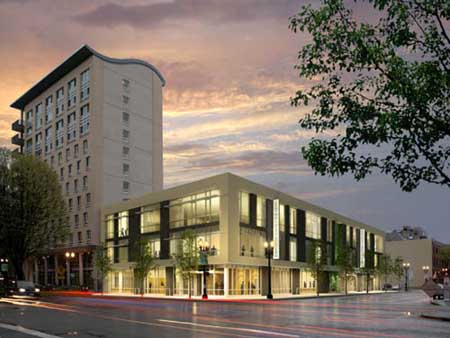 December 2, 2011 -- When Central City Concern opens its downtown clinic on December 12, teams of doctors and alternative medicine professionals will help hundreds of people whose drug addictions or mental illnesses threaten to keep them on the streets.

At a time when funding for such services is drying up, the Old Town Recovery Center will become a reality.

The more than $20 million center stands on the corner of NW Broadway and NW Burnside -- the previous site of an abandoned Burger King.

Inside the three-story building, four teams of six to nine healthcare professionals — including physicians, naturopaths, psychiatric nurses, and a medical administrator— will offer holistic treatment for homeless people. Yoga, acupuncture, educational classes and physical rehabilitation will also be offered.

"Amongst the homeless population you’ll see people whose beginnings of their homelessness generated from mental health issues or addictions, or whose homelessness has exacerbated those conditions," said Ed Blackburn, Central City Concern's executive director.

Integrating such treatment along with primary care is more successful in treating the often complex health issues among homeless people and ending their homelessness, Blackburn said. (Central City also helps find housing and jobs for the homeless.)

Initially the clinic will serve about 600 people. By the end of 2013, it’s expected to help about 2,000 people, Blackburn said.

Half of the money for the clinic -- $8.95 million, came from the American Recovery and Reinvestment Act of 2009, also known as the stimulus package. The rest came from tax credits and bonds.

"We simply don’t have enough resources available anywhere to effectively address homelessness and mental illnesses or addictions," Blackburn said. "There's not enough services, and there's not enough housing. This center will help address part of that service gap."

Without those federal stimulus dollars, the clinic wouldn't be opening, Blackburn said. It could have taken many years to gather local funds, Hidalgo said.

"To rally the support and political will — you can do it — but at a time when our community here and the state of Oregon are really struggling with ongoing fiscal issues, the funding is more limited and dollars to invest are more limited," he added. "They were very lucky, and our community is very lucky . . .This is an entire medical clinic and it's an entire mental health center: It's an amazing opportunity."

To learn about the open house for the Old Town Recovery Center, click here.