The non-profit organization is considering offering in-patient hospice and palliative care, and is looking to build partnerships.
By:
Christen McCurdy 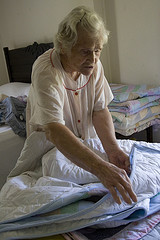 Care Partners is looking to expand its geographic territory as well as form partnerships with other independent healthcare organizations. In addition, the organization hopes to deliver services in a new way – offering in-patient hospice care, and palliative care for patients who need round-the-clock care but aren't necessarily candidates for hospice.

Andy Kyler, the CEO of Care Partners – which opened 31 years ago as Mary Anne Nemo Hospice, and went through a few name changes before settling on its current name – said the not-for-profit grew out of the grassroots movement in the 1970s and '80s to improve end-of-life care. Hospice organizations proliferated throughout the 1980s and 1990s as consumers opted to spend their last days with their families, rather than in hospitals.

Now, hospice care is much more common, Kyler said, and the growing demand has changed the nature of the hospice marketplace. According to the National Hospice and Palliative Care Organization, free standing, independent hospice organizations comprise 57 percent of the hospice providers in the United States. Hospital systems, home health agencies and nursing homes are more likely to acquire hospice organizations or start offering such services on their own. According to Oregon Hospice Association Data released in 2010, 19, or 51.35 percent, of Oregon's hospices in the state are independent and 28 (84.85 percent) are not-for-profit. Care Partners is one of just a handful of independent not-for-profit hospice providers in the Portland area.

“It's a very crowded market,” Kyler said. With that in mind, Care Partners has changed its name and rebranded itself. Now the organization may build an in-patient hospice facility, since not all patients have are able to receive in-home care. For instance, people who are homeless or undocumented – who make up some of the clientele served by Care Partners serves -- may need a place to go at the end of their life.

More affluent patients may need in-patient hospice as well, Kyler said. Hospice staff and volunteers typically help a patient's family and provide comfort and care at the end of life. But, birth rates and family sizes have declined over the past few decades, meaning baby boomers often have fewer family members available to take care of them when they become ill.

“The biggest role in-patient hospices play is in helping people die outside the hospital,” Kyler said.

For instance, in Cowlitz County Washington, 16 percent of people die in hospitals, versus 24 percent statewide, largely because there’s an in-patient hospice facility.

Also, hospice care is typically only provided for patients who are considered in the end stage of their illnesses. Kyler said Care Partners staff stay with people for an average of 20 days. Increasingly, people with terminal diagnoses are living longer, but still need assistance to stay comfortable and meet their daily needs.

Care Partners is gradually expanding into pre-hospice palliative care, which can help manage symptoms and meet the needs of people who are very ill but are expected to live for several months or several years. “All hospice is palliative care but not all palliative care is hospice,” Kyler said. It also makes sense to offer people more continuity of care, instead of coming in – as hospice staff often do – during the last few weeks of life.

Care Partners takes care of 340 people a year and has a staff of 45 people. “The only way we can keep going is if we find a way to grow,” Kyler said. “When you have a saturated market, it's hard to grow.”

Image for this story by Ryan Stone (CC BY-NC-SA 2.0) via Flickr.