The suit claims the hospital chain should not have billed an Oregon man for nearly $15,000 to pay for treatment after an accident and then taken his money.
By:
Lynne Terry 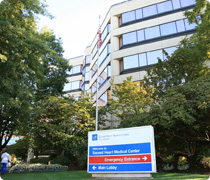 An Oregon man is suing PeaceHealth over the cost of medical treatment from a car accident.

The complaint, filed in U.S. District Court in Portland, accuses PeaceHealth of “secretly” overbilling Medicare patients who are hurt in accidents, saying it routinely charges them for treatment despite a federal rule that bans the practice after a certain period of time. The suit seeks three times the losses suffered by the plaintiff, Donald Griffith. It was filed as a potential class action which needs to be certified by the court before moving on.

“This issue has never been litigated ever before so it’s a big deal,” said Tim Nay, an elder abuse attorney in Portland and lawyer in the case. “I would think that there’s a fair chance that this class may be certified and the litigation may move forward."

A spokesman at PeaceHealth said the organization does not comment on pending litigation.

According to the complaint, Griffith was injured in a motor vehicle accident near Eugene in November 2015. He was treated at PeaceHealth Sacred Heart Medical Center University District in Eugene from the end of November to early July 2016. Though Griffith is a disabled person who has Medicare, PeaceHealth did not bill the federal insurance system. Instead, it billed Griffith in October 2017 for $14,574.83 to pay for his treatment out of the settlement.

Any Medicare provider, like PeaceHealth, has to follow certain time limits when billing for payment from a settlement, according to an exception in federal law that only applies to Oregon. The exception allows Medicare providers to bill a settlement only if the insurance company pays the injured person within 120 days after that individual files a claim or within 120 days of treatment, whichever is earlier, the complaint says.

“Since they didn’t do that in this case, they cannot come back more than 120 days later and try to collect from the settlement,” said Michael Fuller, a class action specialist and lawyer in the case.

The complaint asks that any other Medicare patients who entered an agreement with PeaceHealth under similar conditions join the suit to seek compensation. The class includes any cases up to seven years old.

The complaint says that hundreds of people qualify to join the case. Fuller expects others to come forward.

Woah! This is shocking.

Woah! This is shocking. I was just looking for a good Los Angeles DUI lawyer but coming across this post was informative. I really think that such news and information will help me clear my exam with a very good score.