Trish Yerges, who was diagnosed with two types of cancer last year, had to travel more than 7,000 miles for specialty treatments that are commonplace in large metro areas like Portland.
By:
Susan Parrish 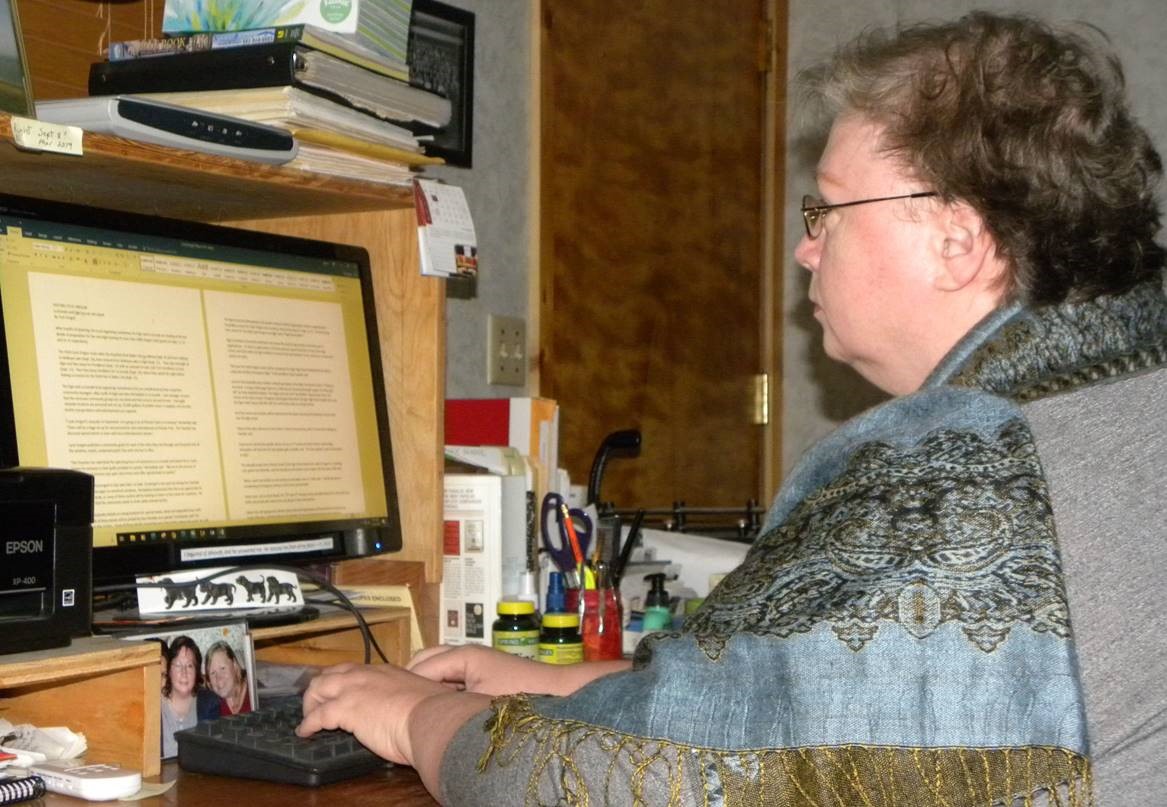 Trish Yerges, who lives in Union County, was diagnosed with two types of cancer last year./Courtesy of Trish Yerges.

Summerville, Oregon  — Trish Yerges was diagnosed with two types of cancer last year. That was bad, but her circumstances were much worse: The area where she lives in rural Union County in the northeastern part of the state lacks cancer specialists.

She had to travel more than 7,000 miles for treatment of endometrial and breast cancer: A published author and freelance writer, she had six appointments at Compass Oncology in Portland, a breast lumpectomy at Legacy Good Samaritan Medical Center in Northwest Portland, 20 radiation treatments at Providence St. Mary’s Regional Cancer Center in Walla Walla, Washington and a hysterectomy at Providence St. Vincent Medical Center in Southwest Portland.

The trips were exhausting and pinched her family’s finances, costing more than $1,600 for travel-related expenses.

“We had to tighten the budget belt a lot, conserve income to cover the costs, eat lightly on the road and pack some foods in a cooler on the drive,” Yerges said. “We even lowered our use of electricity at home to bring monthly bills down.”

Yerges, 61, is not alone. For decades, Eastern Oregon residents have had to travel long distances to medical facilities in Portland, Boise or Walla Walla because of the lack of specialists nearby.

Many specialists are nonexistent in Eastern Oregon: There are no neurosurgeons or gastroenterologists, for example. For cancer patients in the region, the closest radiation therapy clinics are in other states -- in Fruitland, Idaho to the east or Walla Walla to the north. Nearly 30 percent of patients treated at Providence St. Mary Regional Cancer Center in Walla Walla are from Oregon. Of these, the majority are from Eastern Oregon, said Kathleen Obenland, the center’s director of marketing and communications.

Like most Eastern Oregon counties, Union County is served by only one hospital. Grande Ronde Hospital and its affiliated medical facilities in La Grande, offer many state-of-the-art cancer treatments, but with a county population of only 26,000, the hospital doesn’t serve enough people to offer comprehensive care.

“I have a lot of faith in the Grande Ronde Hospital,” Yerges said. “I’ve had excellent care in the radiation department. They just don’t have some of the equipment cancer patients need, so you have to go elsewhere.”

The lack of specialized physicians was even worse in the past.

In the past 10 years, Grande Ronde Hospital has added professionals, like neurologists, cardiologists and neonatologists, who care for children.

“Everything we’ve done has been to bring as much care to people as possible in a rural setting,” said Mardi Ford, director of communications at the hospital.

The hospital also periodically brings in visiting professionals. For patients in remote areas, the hospital offers telemedicine programs that enable patients to communicate with a provider, either at the hospital or in another city.

Some specialists from larger cities travel to La Grande or Baker City once a month to see patients, but they get booked quickly, said Bonnie Dittmann, a physician’s assistant at La Grande Family Medicine. Yerges’ oncologist, Dr. Maynard Bronstein, divides his time between patients in Union and Baker counties.

However, the effort made by Grande Ronde and other rural Eastern Oregon hospitals and clinics still leaves a considerable gap in services. Ford, who declined to discuss any lack of service, acknowledged that “there are instances when patients have to go to other places.”

Cardiologists and pulmonologists are especially in demand, Dittman said. She often has to refer those patients to distant medical centers.

The area has long been a dermatology desert, lacking physicians with that specialty. The only option is a dermatology certified nurse practitioner in La Grande but it can take months to get an appointment. Beginning this month, an independent dermatologist will begin visiting St. Alphonsus Medical Center in Baker City once a month.

Dittmann often refers patients to a Walla Walla clinic, where the wait is usually only a few weeks.

“Walla Walla is only a 90-minute drive,” she said. “We consider that to be pretty close.”

A Financial Hardship For Families

Traveling far from home for medical appointments can pose a financial hardship on patients and their families. Not only do travel costs stack up but patients miss work. Yerges’ husband, who has no employees, had to close his gallery in La Grande while he drove his wife to Portland.

“When my patients return from Boise or Portland, it’s financially draining for them to pay for gas and a hotel room,” Dittmann said. “They often return to me unhappy and overwhelmed.”

Sometimes patients don’t go because they can’t afford the trip.

Most hospitals and many cancer treatment facilities offer a limited number of rooms in low-cost housing for patients and caregivers who have traveled a significant distance. Before her two surgeries in Portland, Yerges tried to book a room in the respite lodging provided by both Legacy Good Samaritan Medical Center and Providence St. Vincent Medical Center, but all of the rooms were full, so she stayed in a motel.

“It was a financial burden,” said Yerges. “I didn’t always have the money for the motel. My two sisters helped me when we needed it.”

Providence St. Mary Regional Cancer Center in Walla Walla offers patients lodging in Herring House, a five-bedroom guest house across the street from the center for only $10 per night. A second guest house, the Robin House, is available in nearby College Place.

But those low-cost options fill quickly, said Stacey Karvoski, a nurse who runs the chemotherapy and infusion therapy clinics for Wallowa Memorial Hospital in Enterprise.

The residents of remote Wallowa County in the far northeastern corner of the state have to drive two hours each way over winding, two-lane roads for radiation treatment in Walla Walla, the closest cancer treatment facility. Karvoski said some Wallowa County cancer patients stay in Walla Walla during their treatments. Some rent motel rooms, but Karvoski said a more affordable option for patients who own recreational vehicles is to live in their RVs in Walla Walla while they undergo daily radiation.

In Boise, many Eastern Oregon patients stay in two-patient guest houses near St. Luke’s Boise Medical Center and St. Luke’s Mountain States Tumor Institute. Bishop Foote Respite House provides lodging for about 3,000 patients and caregivers annually, and about 35 to 40 percent of the guests live in Eastern Oregon, said Gabrielle Moore, manager of patient housing. Rooms rent from $16.95 to $22 a night -- significantly less than $130 for the average Boise hotel room.

The closest cancer treatment for Baker County residents is St. Luke’s Mountain States Cancer Institute in Fruitland, 75 miles east of Baker City. A respite house in Fruitland is scheduled to open in 2019.

Frequently in the winter, driving conditions are hazardous in Eastern Oregon.

Patients have to negotiate the icy and winding 160-mile stretch of Interstate 84 from Cabbage Hill east of Pendleton to Dead Man Pass in the Blue Mountains to Ontario at the Idaho border.

The difficulty of the drive can dissuade patients from getting treatment, though there are options.

When Yerges learned she needed radiation five days a week for four consecutive weeks in Walla Walla, a 90-minute drive over a pass, she found Mid-Columbia Council of Governments -- a free ride program. It manages the Medicaid Medical Transportation program for low-income residents in 14 Eastern Oregon counties.

Yerges rode for free through the program, which caters to patients on the Oregon Health Plan.

Another program carries patients on vans for free from Baker City to St. Luke’s medical facilities in Fruitland and back every weekday.

And Rides to Wellness provides low-cost travel to medical appointments for people of all incomes as far as 140 miles away from the patient's primary care medical facility. The program, funded by the Oregon Department of Transportation, gives veterans free rides with no mileage limit.

“When people are sick, they often don’t know what services are available to them,” Yerges said. “A lot of people would qualify for these medical rides if they knew about the programs.”

But the rides are not always smooth going.

One October day during the trip to Walla Walla, an exhausted Yerges fell asleep as her driver navigated the winding, two-lane road through the unincorporated community of Tollgate, elevation 5,045 feet. She was jolted awake after a truck veered into their lane and forced them onto the gravelly shoulder. Her driver avoiding avoided a head-on crash that could have sent the vehicle plummeting down an embankment.

Worth It In the End

Yerges’ treatments were an ordeal but she had no regrets.

A Portland surgeon performed a lumpectomy, leaving no visible scar. Another Portland specialist used a state-of-the-art robotic technique to for her hysterectomy. The procedure results in a smaller incision, less pain and a shorter recovery.

“If I want that kind of skill, I would not find it in a small, rural hospital here,” Yerges said.  “I’d have to find it in a large city.”

“Even though I had to travel a long distance and I had inconveniences and additional expense, I don’t have any regrets about the choices I made,” Yerges said. “Sure, it would be great if these medical services were close by. But when they’re not, it’s worth the costs to go out of the area and find the very best you can because life is worth it.”

You can reach Susan Parrish at [email protected].

Aug 30 2018
Keywords:
cancer, eastern Oregon, specialists
×
This article is for premium subscribers. If you are one, please sign in below.
You can see two more premium stories for free. To subscribe, click here. We depend on premium subscriptions to survive, and they are tax deductible.
Sign InGo Premium Not now