Can Gov. Kate Brown Sell Oregonians On Her Vision For The State?

Oregon's governor has been in office four years yet faces a competitive race.
By:
Lauren Drake 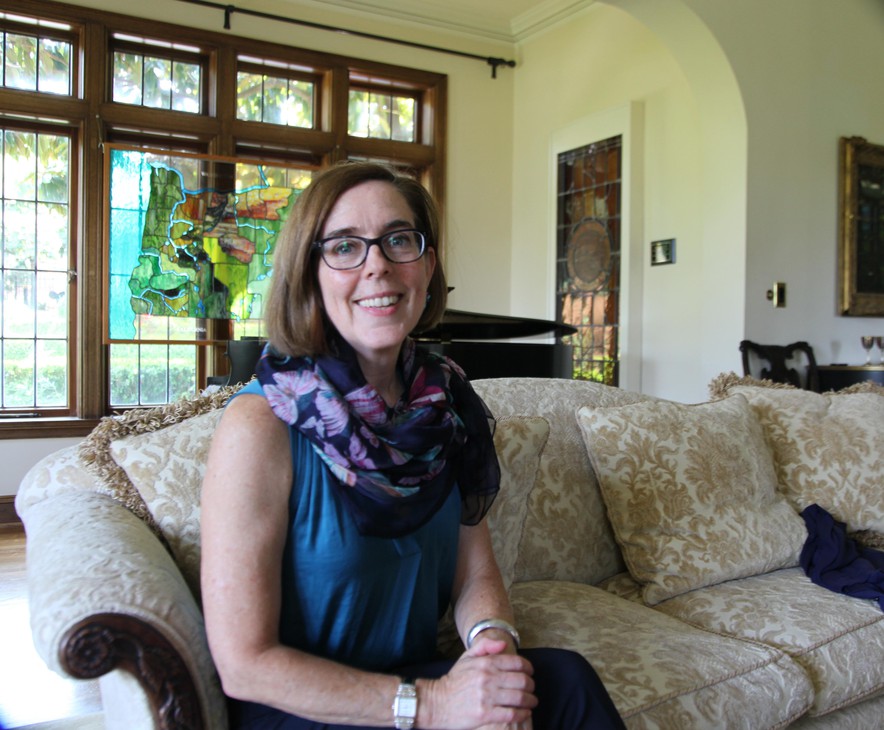 When Gov. Kate Brown was first swept into office by scandal, she benefited from comparisons to the man she was replacing, Gov. John Kitzhaber.

Shortly after Brown succeeded Kitzhaber, the New York Times wrote a glowing profile, noting her verve set her apart from her predecessor. She breezed through the Capitol hallways offering unsolicited “hellos” to people — greeting them by their first names. She hosted BBQs at Mahonia Hall, the governor’s mansion. When a member of the press corps had his first baby, the governor wrote a handwritten congratulatory note.

In other words, Brown was friendly, personable, accessible.

Now, she’s been the state’s leader for nearly four years. And she has a problem.

In a state where Democrats outnumber Republicans and a year in which many strategists expect a blue wave of progressive wins, the race between Brown and her GOP opponent, Knute Buehler, is considered competitive.

In part, Brown’s critics say, that’s because the lowkey incumbent has yet to prove she’s evolved into the leader the state needs right now. The state faces massive problems, yet Brown’s detractors say the governor hasn’t articulated a clear vision or unveiled a comprehensive plan to solve them.

John Horvick, a pollster with DHM Research in Portland, said Brown has left her own party with the feeling that she is, “totally fine.”

But there’s no sense of urgency or excitement about her candidacy, he said.

“Most Oregonians, most Democrats, just aren’t sure what she should be getting credit for,” Horvick said.

A Style All Her Own

The governor has heard the criticism.

She points to legislation passed under her tenure: the increase in the state minimum wage, a law ensuring all Oregonians have access to reproductive health care and the biggest investment in infrastructure — the $5.3 billion, statewide transportation package — Oregon has ever seen.

She says a lot of the criticism could be rooted in her approach to governing.

“My leadership style is not in pounding a table and striding into a room and saying, ‘This is what we’re going to do,’” Brown said. “Because I think that public policy developed through consensus and collaboration — through people really wrestling through the gives and takes — is much more resilient.”

But, she’s quick to say, she can pound the table.

In the midst of negotiating the transportation package, for example, Brown says key stakeholders threatened to walk away from the deal.

The governor pushed back. She told the groups she would travel the state and visit every editorial board. She would ensure people knew who was responsible for derailing the bipartisan package.

“That was pretty hardcore,” Brown said. “That’s not my usual style.”

“(Brown) is just not a showboat,” Roberts said. “Tom McCall was a big showboat, super showboat. Some people are just showboats.”

Val Hoyle, the state’s newly elected labor commissioner, said Brown is often held to a different standard because she is a woman. Brown has a way of leading that brings people around the table. People often confuse that, especially in women, Hoyle said, as not being strong enough.

The governor is someone who “doesn’t jump up front to take credit for things,” Hoyle said of Brown, “but makes sure things get done and doesn’t worry about who gets credit.”

Brown has a saying: “When you don’t care who gets the credit, you can GSD.”

In Brown-speak, GSD stands for “get stuff done.” And Brown says she can GSD in large part because of the relationships she has built.

But there are big problems facing the state.

Despite the good economy, a budget deficit looms. The rising cost of the state’s public employee pension system is crippling local school districts. And the state is failing when it comes to taking care of foster children.

Brown unveiled a plan in August to improve the state’s public school system. But she hasn’t detailed how to pay for it. She acknowledges the state faces a deficit and needs money, but isn’t leading the charge as to how to raise the revenue. And critics say she’s ignoring one of the biggest drivers of the deficit: the pension system.

Her Republican opponent and his allies continue to hit those points. During the campaign, Buehler has pushed to paint Brown as a failed leader and pointed to dismal graduation rates and high drop-out rates to bolster his claims.

Jack Roberts served as the director of the Oregon Lottery when Brown became governor. He was appointed by Kitzhaber to the post and also served as the state’s labor commissioner. Brown fired Roberts, who is a Republican, not long after taking office.

Roberts said the governor has carved out a reputation as someone who focuses on the immediate issues as opposed to implementing broader, long-term policies.

“There is not a real vision of, ‘This is where we’re going’ … That’s what the campaign should be about, but my sense is we are kind of adrift,” Roberts said.

A Record Of Service In Oregon

Brown has been a fixture in Salem since the 1990s.

The governor grew up in Minnesota but moved to Portland to study law at Lewis & Clark College. She was a lobbyist for the Women’s Rights Coalition when she was appointed to a vacant House seat in 1991. Several years later, she was elected to the state Senate and became the first woman to serve as the Senate Minority Leader.

Brown was elected to serve as secretary of state in 2008. She was re-elected, beating Buehler, in 2012. While secretary of state, she pushed a bill to automatically register Oregonians to vote when they get their driver’s license at the DMV. She signed that bill into law as governor, making Oregon the first in the nation to have such a law. Since it’s been enacted, voter registration numbers have climbed and it’s widely been considered a success.

As governor, she’s also had to navigate a number of unforeseen events from the occupation of the Malheur National Wildlife Refuge to the shooting at Umpqua Community College. When fires ravaged the state this summer, she went on a listening tour, which resulted in the creation of a fire recovery council.

She’s been a frequent critic of the Trump administration and resisted calls from his administration, including his calls to be tougher on immigration. But she’s also generally been seen as a quieter leader of the resistance compared to other blue state governors, such as Washington’s Gov. Jay Inslee.

Brown is married to Dan Little and has two stepchildren. She identifies as bisexual and was hailed as the first bisexual governor in the nation.

Perhaps even more than the polling, the money flowing into the race is a clear sign that it’s considered competitive.

Brown picked up $500,000 from the pro-choice political action committee Emily’s List. The Democratic Governors Association has also financially backed her campaign. As of Friday afternoon, she had raised more than $10 million.

Buehler has picked up $1.5 million from Nike co-founder Phil Knight. The national Republican Governors Association has spent another $1 million on Buehler — a sign they consider him a legitimate threat to the incumbent.

The website Real Clear Politics recently shifted their ranking of the Oregon governor’s race from “leans Democratic” to it being a “toss-up.”

But Horvick, the Portland pollster, said despite signs the race is getting tighter, he’s not hearing that Democrats are disillusioned enough to vote for a Republican.

In some ways, comparing Brown to her predecessor is unfair. Kitzhaber had 12 years to learn the job. Brown was thrust into the gig unexpectedly when Kitzhaber resigned. She’s had to campaign for much of her tenure — first in the 2016 race to fill Kitzhaber’s unfinished time in office and now for a full four-year term.

This summer, OPB asked Kitzhaber if there’s a metric by which he judges whether a person is succeeding at the job.

Here’s what he said:

“Having a really clear idea of where you want to end up whether it’s health care or transportation or stabilizing state revenues and being able to articulate that.”

When Brown was first swept into office, she benefited from not being John Kitzhaber.

But Kitzhaber was also considered a dealmaker. Someone not afraid to confront his own party. And he was able to communicate where he was taking the state.

Now, the often pragmatic Brown is on a mission to persuade voters she can be both a manager and a visionary.

That she can both have strong relationships and defy her political allies.

And that if she’s given four more years, Oregonians will find out what kind of leader Kate Brown really is.