Brown Praises Biden’s Vaccine Timeline, But Won’t Commit To It

Kate Brown at May press conference.jpg 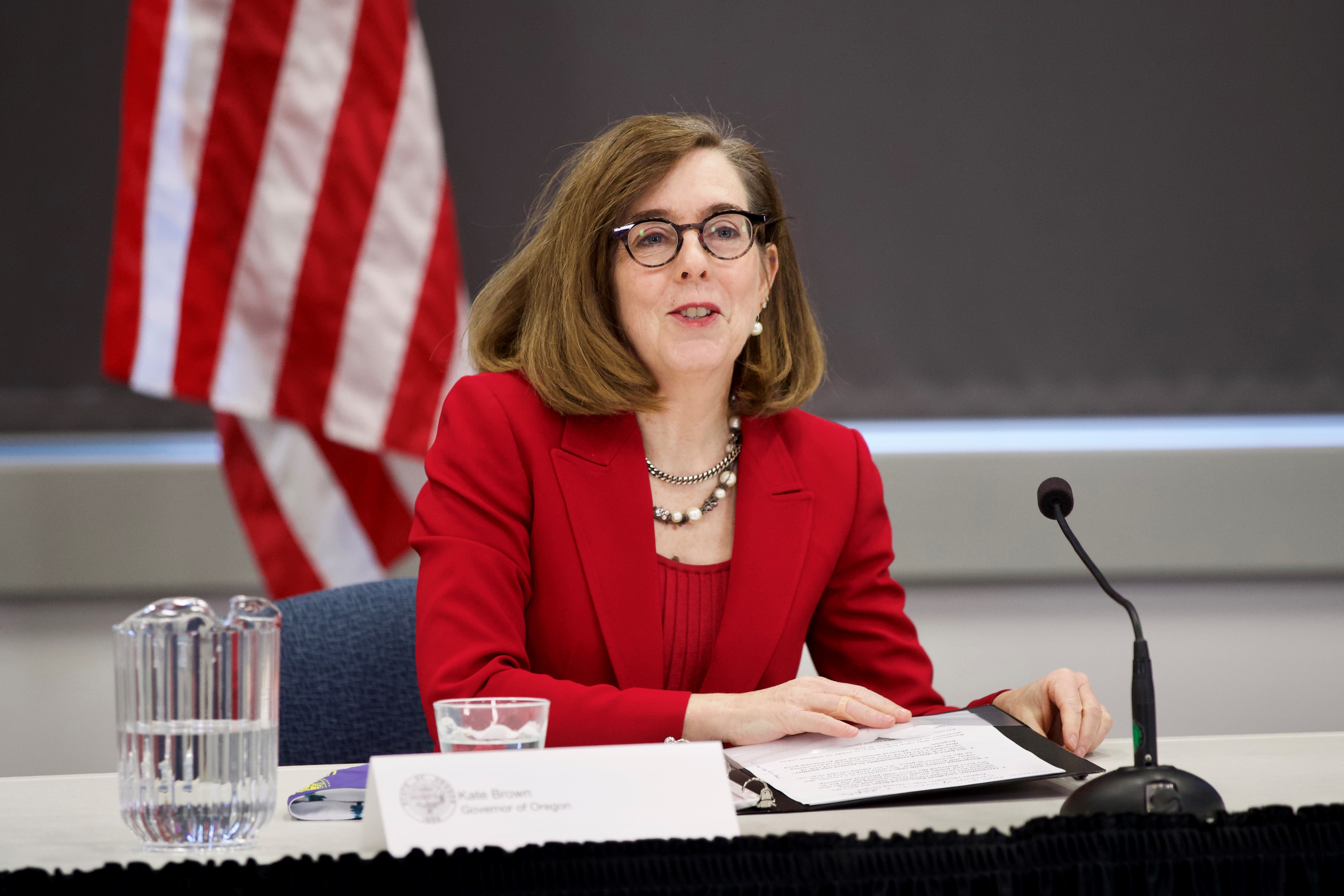 President Joe Biden promised America that he will direct states to make all adults eligible for COVID-19 vaccinations by May 1, a timeline that is two months earlier than Oregon’s rollout schedule.

But Gov. Kate Brown and state health officials said Friday they aren’t sure yet if the federal government will deliver the substantial increase in doses that would enable them to get everyone in state-designated priority groups vaccinated this month and next, and then meet Biden’s goal of opening to the general population on May 1.

And until they know about dosage volumes, Brown and Oregon public health leaders said they are changing neither the state’s focus on priority groups nor its timeline.

To meet Biden’s timeline, the state would need as much as double the roughly 200,000 doses a week it expects to be getting by the end of this month, said Patrick Allen, director of the Oregon Health Authority.

Biden’s declaration, which he made Thursday, would open large swaths of Oregon’s population for vaccinations one to two months earlier than the rollout set by the state.

Federal officials said Biden said will order states to open vaccination to all by May 1, but that the federal government is also rapidly ramping up vaccine deliveries.

Biden’s plan means that every adult will be eligible to sign up on May 1 and the United States expects to have enough vaccine for every adult in the country by the end of May, federal officials said, according to a transcript of a White House briefing.

On its face, Biden’s declaration clashes starkly with Oregon’s plan.

The state’s current plan calls for a rollout that on March 29 will make certain essential workers like agricultural and seafood industry workers eligible, along with people age 45 to 64 with underlying chronic conditions.

On May 1, the state plans to make more front-line workers and adults age 16 to 44 with chronic conditions eligible. By June 1, under the state’s plan, vaccinations would open up to everyone age 45 and older. By July 1, the general population age 16 to 44 would be eligible.

State officials on Friday said they will move up those dates if the federal government, which controls vaccine shipments, increases the supply. In recent weeks, as more vaccine has flowed to Oregon, state officials have fine-tuned their vaccination priorities.

But state officials said they aren’t reworking the state’s rollout schedule without more information from the federal government.

In a Friday press conference, Brown and Allen praised Biden’s ambitious plan, which envisions an Independence Day holiday with a return to small gatherings as more people become vaccinated.

The catch: Oregon will need much more vaccine in order to let that happen. Until they see hard numbers that show an increase in doses, they don’t want to disappoint Oregonians in priority groups and wrongly assure the general population that Biden’s promise will become a reality in Oregon.

If the state didn’t receive increased shipments this month and next, and then on May 1 opened vaccinations to everyone, there would not be enough vaccine to go around, in effect either denying shots to people in priority groups, or leaving people in the general population frustrated that they were eligible but unable to get an appointment.

On Friday, Brown said that she would “do everything” she could to see small gatherings on July 4 in line with Biden’s “audacious announcement.”

"Our plan in Oregon has always been to align our vaccination timelines with available federal supplies,” Brown said. “As weekly shipment allocations increase, we will reassess those timelines. If the doses are there, I have every intention of utilizing all available state and federal resources to match the president’s timeline for universal eligibility.”

However, Brown said, even with an accelerated timeline, the state would continue to prioritize vulnerable Oregonians, including senior citizens, people with chronic conditions and frontline workers so they can be at the “front of the line.” In the first phase of the rollout, the state vaccinated health care workers, staff and residents in long-term care facilities and first responders. The state also prioritized K-12 public school teachers, support staff and early childhood instructors before senior citizens so schools could reopen sooner.

This month, the bulk of the vaccination efforts have focused on senior citizens and hard-to-reach groups, including those in adult foster homes. Currently, 47% of seniors over 65 have received at least one dose of the two-dose vaccination. More than half of seniors older than 75 have been fully vaccinated, and the educator workforce is largely complete, Brown said.  The Pfizer and Moderna vaccines require two doses spaced several weeks apart, and the new Johnson & Johnson vaccine requires just one dose.

The state has vaccinated more than 809,000 people with one or both doses and is administering an average of 24,000 doses each day. Of that group, nearly 462,000 people are fully vaccinated, which represents about 11% of Oregon’s population. The state has administered nearly 1.3 million vaccine doses.

The state does not directly put doses into arms, but allocates how many doses the federal government will send to providers, including public health agencies, clinics, hospitals and other providers.

Allen said Oregon vaccinators have the capacity to double the number of daily injections they administer, and stressed that Oregon is on track to meet its current eligibility timeline.

As for the president’s May 1 eligibility goal, that’s another issue.

“We need to know when more vaccine vials will actually arrive in Oregon as promised,” Allen said.

It’s clear that Oregon officials are still wary after a bad experience in January, in the waning days of the Trump administration, when they announced and planned an ambitious rollout to seniors and educators only to learn a promised federal vaccine stockpile didn’t exist.

They are determined not to over promise again. Allen said Biden’s administration has followed through on its promises so far, but the  state has no specific information on dosage increases, if any, under Biden’s new plan.

“Until we get more clarity, we need to keep our current timelines in place,” Allen said. “We need to see the increased doses in the federal ordering system.”

Currently, the state receives about 126,000 first doses a week and expects to get more than 200,000 weekly by the end of March.

But to reach the president’s timeline, Allen’s back-of-the envelope math at the press conference suggests the state would need even more. It “would probably require a further doubling of doses,” Allen said.

The state may get there with less than doubling the doses but with a substantial increase.

It’s possible that vaccinating an extra 300,000 to 400,000 more people in April beyond the state’s current plan would be enough to accelerate the schedule, Allen said.

As the state’s vaccination work unfolds, officials offered hopeful news and a strong caution for Oregonians not to let down their guard with most of the population unvaccinated and variant strains emerging that can spread more easily.

Dr. Dean Sidelinger, the state’s epidemiologist, said cases are down. The state’s seven-day rolling average was 295 new cases a day as of Thursday, a 74% drop from 10 weeks ago, when the seven-day average was 1,149. Hospitalizations are down too, and stood at 121 COVID-19 patients in Oregon hospitals on Thursday, compared to 466 patients less than three months ago.

He warned that COVID-19 variants discovered in Oregon, like the B.1.1.7 and E484K mutations, are isolated cases, but they can spread very quickly.

Officials said there is still much to learn about the variants and how they may impact the long-term trajectory of the pandemic.

For now, Sidelinger said that a vaccination is “not a free pass,” adding that the state is still months away from community immunity. He stressed that Oregonians still need to continue to practice social distancing, wear a mask and avoid large gatherings.

Mar 12 2021
News source:
The Lund Report
Keywords:
Kate Brown, COVID-19, vaccine
×
This article is for premium subscribers. If you are one, please sign in below.
You can see two more premium stories for free. To subscribe, click here. We depend on premium subscriptions to survive, and they are tax deductible.
Sign InGo Premium Not now