Brown A 'Bag Of Emotions' As Restrictions Lifted 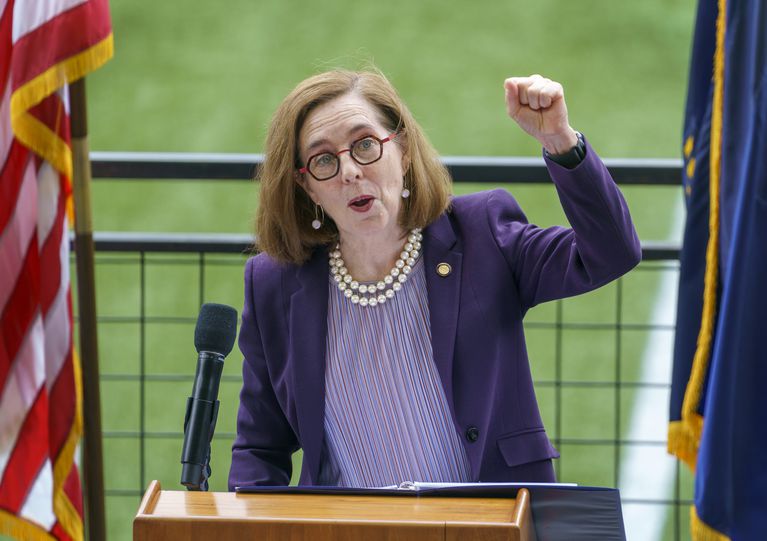 The sound of applause and cheers rang throughout Providence Park on Wednesday from the couple hundred attendees who attended a reopening ceremony hosted by Oregon Gov. Kate Brown as she lifted COVID-19-related safety measures statewide.

Brown targeted June 30 after the state failed to reach its initial goal of vaccinating 70% of Oregon’s eligible population by June 21. State data currently shows that 69.5% of eligible Oregonians have received at least one shot. Approximately 16,000 more Oregonians need to receive a shot for the state to reach 70%.

The event was marked by the celebration of the lives of people who were lost to the viral pandemic, as well as commending the efforts of first responders and essential workers who put the state on their shoulders over the past year. The crowd consisted of a political and business “who’s who” of Oregon, with attendees including Oregon Secretary of State Shemia Fagan, countless legislators, and local city and county elected officials.

“I don’t think it would be a surprise to anybody here when I say I am a bag of emotions this morning,” Brown said. “What a journey we’ve been on. It’s been 489 days since we discovered the first case of COVID-19 in Oregon.”

Brown recognized and commended Hector Calderon, the 47-year-old Beaverton resident who was the state’s first confirmed case of COVID-19, for his resilience as he battled the virus for nearly two months, as well as the healthcare workers who leapt into action to help people like Calderon when the disease struck Oregon.

Calderon is one of more than 208,000 Oregonians to contract the disease over the past 16 months since the pandemic hit. One of the largest discussions around the pandemic has been the inequities exposed in healthcare and economic opportunities for marginalized communities.

Brown met with members of the media in the grandstands of Providence Park following prepared remarks by speakers Wednesday. She addressed questions sparked by concern over reopening when vaccination rates of Oregonians of color continue to lag behind that of white residents.

“Our goal is for (every demographic) to have an 80% vaccination rate. However, that’s going to take time, and it’s really going to be an individual effort … door-to-door, peer-to-peer,” Brown said. “We have continued to encourage our healthcare providers to reach out to their patients, all of them, to encourage them to get vaccinated.”

Of white Oregonians eligible for the vaccine, more than 60% have received a shot. Numbers among Black and other people of color don’t paint quite the same picture, with only 45% of Oregon’s Black population vaccinated, and just 44% vaccinated among Latinos and Native Americans in the state, according to OHA data.

Rates among both Pacific Islander and Asian American communities outpace that of white Oregonians, at 80% and 64%, respectively.

Brown responded to a question on whether reopening while vaccination rates within communities of color continue to lag behind white Oregonians would only continue to exacerbate the inequities exposed by the pandemic as rates of infection and hospitalizations will continue to disproportionately affect those populations.

According to Brown, the current rate at which communities of color are receiving vaccinations outpaces all other demographics, and the state is pushing to close those gaps even further.

The Oregon Legislature recently passed bills creating several new offices and commissions that will examine inequities across the vast number of services the state provides. Brown said she’ll be reviewing those new agencies for potential candidates to appoint and hire leaders to direct them in the coming months.

“I have a year and a half left as governor, and my focus will be on tackling racial justice and promoting equity in our, frankly, in our workforce, in our state agency leadership, in our programs and in our culture,” Brown said. “We will move quickly. That being said, (the Legislature) passed several hundred bills. We have to review each one of them.”

Despite serious concerns of how reopening will affect the state, the tone of Wednesday’s event was high-spirited. It featured a variety of speakers representing state agencies, Oregon business leaders, doctors and athletes from the Portland Timbers and Thorns soccer clubs.

Oregon Health Authority Director Patrick Allen — in step with other speakers — recognized the bold efforts of Oregon’s health care community and the sacrifices of everyday Oregonians that led the state to this point. A long moment of silence was held to honor those whom Oregon has lost.

“I hope that as this great pandemic of 2020 begins to recede, it’s lessons won’t be lost in the memory of our state, our nation, and the generations who follow in our footsteps,” Allen said. “I want to acknowledge that it can be hard to grasp all that the virus has taken from us and bear the sorrow that it’s left behind. In Oregon, we’ve lost 2,774 family, friends, neighbors, and co-workers who died with COVID-19. If we took just one minute to honor each person we’ve lost, we’d stand a vigil that would last more than 46 hours.”

Ricky Gomez, owner of Southeast Portland restaurant Palomar and local business advocate, spoke briefly on the trials that business owners and workers across the state felt as the pandemic took a toll on the state’s economy.

Gomez’s remarks celebrated the resilience of Oregon’s business and hospitality industries, saying that in dark times, many came together to work on creative solutions to help ease the struggle many felt as lockdowns and safety measures forced them to shutter temporarily — some permanently — and lay off massive amounts of Oregon’s workforce.

“The thing about small businesses is that they almost always have a personal connection to the people who create those spaces. This is what makes them special,” Gomez said. “The restaurant and bar community has always taken health seriously, and will continue to do so. So if your favorite bar restaurant looks a little different than the last time you were there, don’t worry. Be patient with us. We’re catching up. We’ll get there.”

Rukaiyah Adams, chief investment officer of the Meyer Memorial Trust and former chair of the Oregon’s Investment Council, spoke about how the pandemic has put a spotlight on health and economic inequities felt by Oregon’s communities of color. Adams called for continued efforts to eradicate those disparities and to celebrate the work of those who have pushed for a more equitable system in all aspects of life.

“The staggering breadth of the pain in the pandemic and shutdown did not happen in one day. That is also true of our recovery,” Adams said. “Reopening means renewal. None of us, not one of us knows the way forward. But after this remarkable year, I hope that we’ve learned one thing: That we are better together, and so the recovery begins.”