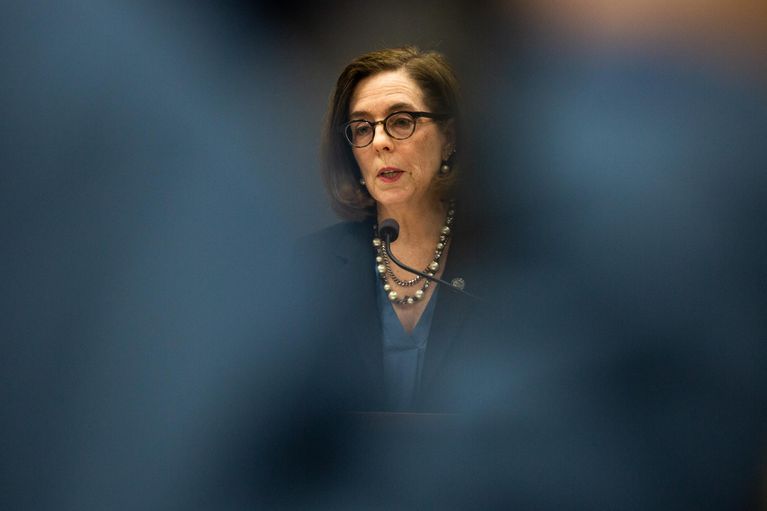 Gov. Kate Brown on Friday backtracked on the state’s decision to shield some data on COVID-related deaths.

Throughout much of the pandemic, state officials have shared biographical information for each person who has died from COVID-19. The individualized information included a person’s age, county, location of death, when they tested positive for coronavirus and when they died.

Earlier this week, the Oregon Health Authority abruptly reversed course and said it would stop providing the demographic data in an individualized form but instead provide a more aggregate picture, such as listing ages of people who have died in a range rather than giving specifics. Initially, the governor defended her state agency’s decision. On Friday, however, she tweeted she had changed her mind and directed the agency to once again release individualized, specific, data.

“In a pandemic, Oregonians must have access to timely (information) to keep themselves (and) their families safe,” Gov. Brown wrote in a tweet. “I have directed OHA to disclose all data on COVID-19 deaths weekly, including the date the individual tested positive, their age, location (and) underlying health conditions.”

The governor said the agency could release the information in a weekly form, rather than daily. But the daily reporting is actually easier for the state epidemiologists, according to a spokesman, so the daily reports will resume.

On a political level, the timing to release less specific data was not ideal for a governor who has faced fierce criticism for her decision to prioritize vaccinating teachers before the elderly. The elderly have the highest death toll in the state and without offering the individualized reporting data it could have been more difficult to determine how many seniors died in the time period when teachers received their vaccination.

That was a notion Republican lawmakers immediately seized upon.

“A senior who has been patiently waiting at home while waiting for the vaccine might reasonably think the timing of the decision to obscure the data is corrupt – given the controversy about teachers jumping them in line,” said Dru Draper, a spokesman for the Senate Republicans.

Although the move to conceal some details quickly veered into partisan territory, Republicans weren’t the only ones concerned about the change.

Throughout the fall, Sen. Sara Gelser, a Democrat from Corvallis, wrote down every person who died, their age and their location of death. There was something humanizing about it, Gelser said.

“We weren’t just turning these people into numbers, we recognized every day these people are loved by others in the community,” Gelser said.

Dehumanizing the individuals, however, wasn’t Gelser’s only concern about making the data more vague. In the beginning of the pandemic, by paying such close attention to the individualized data, she started to wonder why some of the elderly were dying in congregate care settings and not at hospitals.

“Did they not want to go to a hospital? If they did, would they have had a different outcome? Is it a choice or is it a barrier we hear about that hospitals are turning around elderly and frail people?” Gelser said.

Gelser said she also felt tracking the individualized data over a long period of time could reveal answers to questions people don’t know to ask yet, but could ultimately help the state improve policy. For example, are people with developmental or intellectual disabilities less likely to land in the hospital?

“Until it’s all done, I don’t know [that] we have thought of all the ways we can pick apart this data,” she said.

Gelser pointed out that on the last day OHA offered individualized data before changing course, a 27-year-old woman with no underlying conditions died.

“It’s interesting and concerning when you are reading the list and you see something outside the norm, or how it all changes over time,” Gelser said.

Here’s how the state reported the information: Oregon’s 1,904th COVID-19 death is a 27-year-old woman in Hood River County who tested positive on Dec. 22 and died on Jan. 23 at Oregon Health & Science University Hospital. She had no underlying conditions.

“You can’t put that (level of detail) in the dashboard, it’s all bundled together and that is significant,” Gelser said.

Instead, the details would have been listed in a range: so someone aged 20 to 29, without knowledge of when the person tested positive, or died, whether they died at home or in a hospital, their gender, their county or if they had underlying conditions.

Sen. Michael Dembrow, a Democrat from Portland, asked the health authority earlier this week to reconsider its decision to solely release the aggregated data.

Dembrow writes a daily newsletter where he also listed the individualized deaths.

Both Democrats pushed back on the idea that the decision made was a political calculation. Oregon Health Authority Pat Allen confirmed in a news conference on Friday that his agency made the decision without consulting with the governor’s office and that it was the result of a workforce issue that had been discussed for months.

Allen said the work is labor intensive and if deaths were to spike again, it’s particularly time consuming. He said he wanted to evaluate the best way to use his staff’s limited time and resources and felt their efforts were put to better use more directly battling the pandemic.

The governor said she is committed to giving the health authority additional resources to help provide the data.

Gelser also pointed out the aggregate data now being offered by OHA will be useful in other ways the individualized data is not. The dashboard, for example, offers more details as to what types of pre-existing illnesses people had before they died from COVID-19. The state will now offer both sets of information.

“I don’t think there is anything at this point that OHA and the governor can do … I think if they give everyone a kitten, people would find evil intent for doing it and everyone is so exhausted and being held accountable on so many different metrics,” Gelser said of the governor and health authority’s staff, adding everyone has been working long hours for the length of the pandemic.

On Friday morning, before the governor reversed her decision, OPB filed a public records request asking for the biographical information for the 20 deaths announced earlier this week; the same information the health authority disclosed for 10 months.

Even though it was information the agency had previously disclosed, it cited an exemption granted to them under current state law that makes the data exempt from disclosure unless they want to release it.

“Except for the data published on our webpage, information obtained by Oregon Health Authority or a local public health administrator in the course of a disease outbreak investigation is confidential under state law,” the denial read.

Rachel Alexander, with the Oregon chapter of the Society of Professional Journalists, said it’s problematic the health authority has a blanket exemption for any information obtained during a public health investigation - even when it’s not individually identifying or when it’s information OHA has released before.

“That gives OHA sole discretion over what to release and when, and makes for maddeningly inconsistent policy at times - like when reporters have requested the data underlying a graph OHA has published and they’ve refused to release it,” Alexander wrote.

Alexander said she’s collected many examples where it’s been an issue since the pandemic began.

“OHA has, for example, refused to disclose to me how many Covid outbreaks have been reported to them, statewide, at homeless shelters, citing that law,” Alexander said.

The Society of Professional Journalists is backing a bill, Senate Bill 719, that would make it clear that bulk, non-identifying data should be disclosed.

This story was originally published by Oregon Public Broadcasting and is shared here through an agreement among a dozen media outlets in the Northwest.